The triumphant return of RuPaul’s Drag Race – not to be confused with RuPaul’s Best Friend Race – is but two weeks away. And before we hear someone tell Morgan or Shangie to come on through, on account of coming from season 2, I’ve still got a couple of countdown dates to share with you. And after hanging with Mimi and Latrice, I knew the only way to continue is with a date with the other half of Latrila, my girl Manila Luzon.

I’ve known Manila for years, meeting when she just young Karl in Minnesota – I was living in the neighbouring town of Mount Rose. We were both outsiders in our towns and somehow found each other at the Mall of America, and became the dearest of friends.

We started hanging out all the time and when we came of age, I encouraged her to go into drag. You’re welcome, obviously. Fun fact: I am also the one that told her it was a good idea to form a clique in season 3. My apologies, obviously.

Manila was so thrilled to death drop by and help me countdown to All Stars 3 and make up for not getting anything to eat after her losses.

“Heather, I’m so glad you shoes me to help you countdown. I am so sad you hadn’t bothered to cover my season, despite us being such close friends.”

Obviously she said that in a perfect Imelda Marcos accent.

And glad she was when she saw that I was cooking up her favourite meal, my Manila Lazone Chicken.

Like the lyrics of my girl Miley’s best song, this dish is the best of both worlds – chilling out, taking it slow with a rich, creamy pasta and rocking out the show with so hot and spicy chicken. 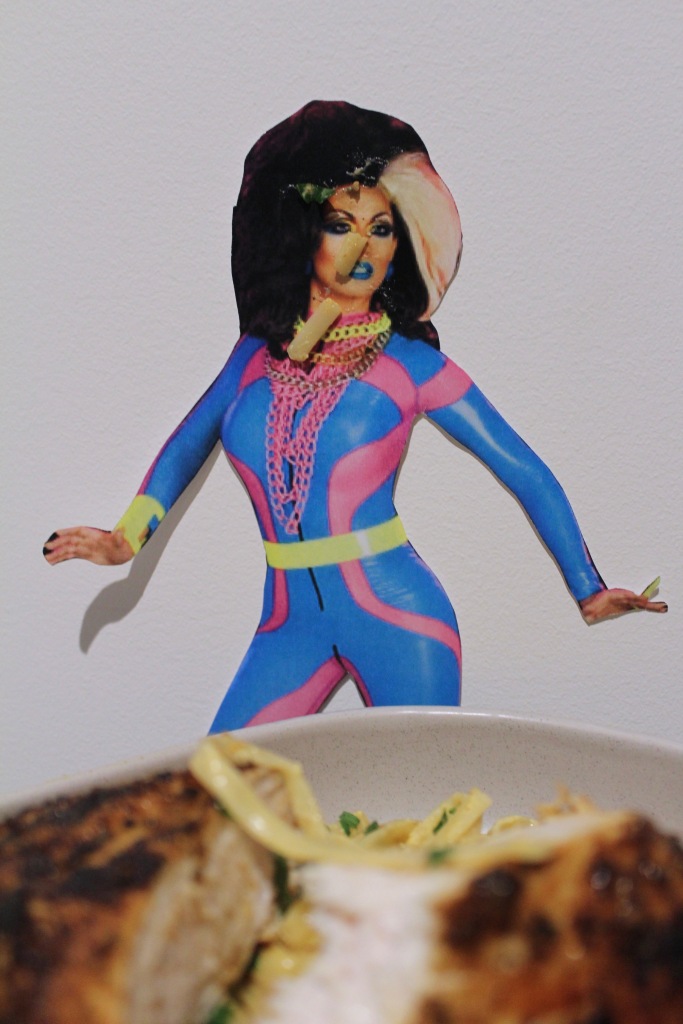 Method
Combine the paprika, a clove of garlic, onion powder, cayenne, oregano, basil and juice and zest of the lemon in a large bowl with a good whack of salt and pepper and a lug of olive oil. Mix thoroughly to combine before tossing through the chicken to coat. Cover and leave to marinate in the fridge for an hour or so.

When you’re ready to go, bring a large pot of salted water to the boil over high heat. Cook the pasta per packet instructions.

Heat half the butter in a large skillet over medium heat until foamy and glorious. Add the chicken and cook for five minutes on each side, flipping only once and pouring over the marinade as you go. Remove from the pan and keep warm.

In the same pan, add the remaining butter and sweat the remaining garlic over a low heat for a minute or so. Whisk in the cream and cook for about five minutes, or until slightly reduced. Season well, stir through the parsley and parmesan, and toss through the cooked pasta.

To serve, place a hearty layer of the creamy pasta in a bowl and top with the chicken, sliced in half at an angle. Devour.