I know what you’re thinking. Didn’t we just farewell Aja on RuPaul’s Drag Race All Stars? Well yes, the answer is yes, but the gay gods have decided to shine upon us all and we’re rolling straight from All Stars into regular Drag Race season 10.

While the cynic inside me – don’t worry, he is lovely and bought me a cask of wine first – has got me thinking, what sort of tomfoolery is about to go down for them to bury the latest inductee into the hall of fame … I’m going to be hopeful. Hopeful that this is the first step into the next phase of the gay agenda. Which is real, and is dominant.

Anywho, I ummed and ahhed whether I should be counting down to season 20, when the last four episodes of All Stars are kind of serving that purpose. Ultimately, obviously, I decided the newest batch of queens deserve the full Fame Hungry treatment, so gave Carson a call to see if he could drop by to catch-up and gossip.

Obviously I came into contact in the mid-noughties, while working together on the OG Queer Eye. Before you even say it, no I was not cooking the food for Ted like people are for Antoni, ok? Anyway … I was brought in by Bravo to keep costs down, so accompanied Carson on the fashion portion to get us discounts.

While it ended in some jail time for me after I decided five finger was my fave discount, Carson was loyal and has stuck by me ever since. Fun fact: to repay his loyalty, I convinced Ru and Michelle to give him the job on Drag Race.

Anyway, we ignored the two elephants in the room – BeBe should have mentioned Aja helped her make her dress and Ross dominating Celebrity Big BROTHERRRRRRR – and got to work chatting about season 10 and how it will be the best ever. There is so much intel we wanted to share, I quickly had to get to work whipping up some Steak, Bacarson & Cheessley Pies to fill our gobs.

I make no secret of my love of pies and these babies are probably one of my favourites. I mean, meat and cheese shoved inside some pillowy dough? Be still my throbbing … heart. 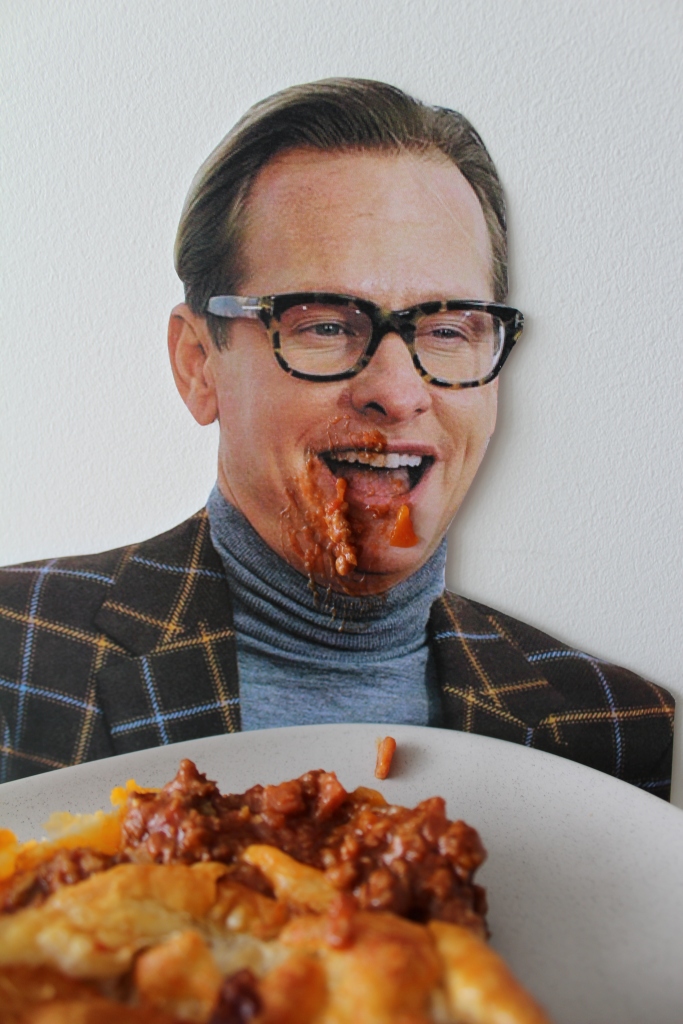 Heat a lug of oil in a large pan over medium heat. Sweat the onion for a couple of minutes before adding the celery, carrot, bacon and garlic, and cooking for a further five minutes. for 5 mins or until softened. Add the mince and cook, breaking up with a spoon while cooking until the mince is browned. Add the tomatoes, paste, Worcestershire and muscovado sugar, and bring to the boil. When bubbling, reduce to low and simmer for twenty minutes or so, or until the sauce has reduced. Set aside and allow to cool.

To assemble, start by stirring most of the cheese through the mixture. Cut each sheet of shortcrust pastry in quarters and press into 8 individual pie dishes. Divide the mixture amongst the dishes and smooth the tops. Cut the puff pastry into quarters and press into the top of the pies, crimping the edges to seal. Pierce a hole in the top, brush with the whisked egg and transfer to a baking sheet.

Transfer to the oven and bake for half an hour, or until golden and crisp. Remove and sprinkle with some of the extra bacon and cheese, and cook for a further couple of minutes.

Remove from the oven and allow to cool for five minutes. Then devour – with or without mashed potato and gravy or ships – being careful not to burn the inside of your mouth on the molten hot filling.