While we have all had countless stints in rehab, we surprisingly didn’t meet our dear friend, 90s teen heart-throb Nick Carter, while receiving treatment.

It was 1990 and we were all on the set of Edward Scissorhands – I was coaching Winona to shoplift and Annelie, at the time, was Vincent Price’s lover when a young Nick Carter appeared on the set as an extra.

While Annelie and I initially felt superior to the young extra, a chance meeting while waiting for our mutual dealer on the studio backlot bonded us for life and we became inseparable.

Over the coming months, we helped foster young Nicky’s talent and encouraged him to start a boyband to rival our frenemies NKOTB (I had a messy break-up with Jonathan). I am not overstating it when I say that we are the reason for the Backstreet Boys. You’re welcome.

Nicky has had many ups and downs over the years, none lower than when he lost Hizza Duff as a future sister-in-law, but we have always stayed close to him and offered him questionable guidance, love and support.

As a finalist in Dancing with the Stars, Nick was only able to stay and celebrate Thanksgiving with us for a short time but knew that the catch-up could prove handy in defeating our soul-less teen compatriate Bindi-Sue.

Thankfully our Nick Ciabatta Stuffing was a dream to whip up – hopefully it is enough to bring Bindi (by name and nature) down.

While Christmas is the time most people want to whip out their (chest)nuts for a roasting, there is nothing better than this rich, creamy stuffing thanks to those beautiful nuts.

So give thanks, for Nick being a babe and beautiful nuts – enjoy! 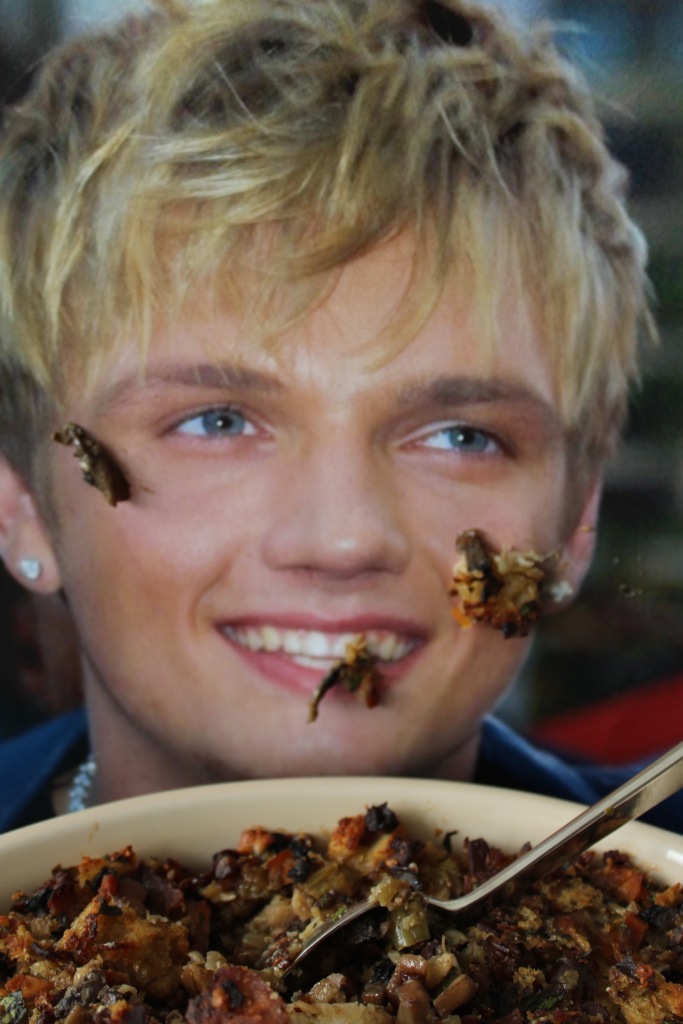 Melt 30g of butter in a large heavy frying pan over medium heat. Add the pancetta and sauté until crisp and golden. Transfer to a plate lined with a paper towel.

Melt the remaining butter in the pan and add the onions, carrots, celery, garlic, rosemary and mushrooms. Seasoning to taste. Sauté until the onions are soft, sweet and tender.

In a large bowl, add the sautéed vegetables, chopped chestnuts, parmesan and bread. Pour in the stock to moisten everything before adding the cooked pancetta and eggs. Season the stuffing to taste and add the parsley. Stir to completely combine all the ingredients.

Pour all of the stuffing in a large baking dish and bake until the top is golden and crisp, about 30 minutes.