Previously on All Stars, after Naomi brutally took out Manila the top five were tasked with overacting in a parody of the making of the hypothetical Sex and the Kitty Girl 3. Naomi chose to push herself by taking the lead role, however it tragically seemed to be too much to take. Trinity and Monet both vied for the role of Kim Cattrall, which Trinity snagged by way of Scissor, Paper, Rock leading her to the top of the week with a hilarious Monique, and the other queens landed in the bottom. Once again Trinity proved superior in the lip sync, snatching another victory and sending Latrice from the competition for a second time.

In the Werk Room the queens discovered Latrice’s very short farewell – because she already did one this season, she didn’t think it was necessary. Which preach. Trinity defended eliminating Latrice, saying she has had more chances than the others and that since they’ve performed better this season, couldn’t justify eliminating them. Despite Latrice’s valid point that Naomi picked her role and bombed, so it would have been fair. The top four then celebrated being the top four, before Monet asked Monique who she had planned to eliminate which led to the best piece of acting in Drag Race herstory, telling her that she had planned on getting rid of her despite also voting to send Latrice home. Talk then turned to last season – where the jury screwed over Shangela – with Trinity particularly nervous about her track record not counting anymore, and given she also lived through season 9 I get her being nervous.

The next day the queens were greeted by Ru who announced that in order to snag the crown they would need to write a verse in her new single Super Queen, perform a dance to said single on the mainstage, oh, and then record an episode of Ru and Michelle’s podcast for a shot to lip sync for the crown. The queens spread out across the Werk Room to start dropping their rhymes, while Monique and Monet spoke about how proud they were to come back straight away and dominate the competition in a way that they didn’t in season. Plus, I assume, they want to add some colour to the Hall of Fame. Trinity and Naomi spoke about their previous experience as finalists, while Trinity admitted that she is terrified of the choreography and doesn’t want it to be her undoing.

The Queens met with Todrick Hall – and Naomi, some hot Pit Crew boys – to work on the choreo, with Trinity freely admitting that she is nervous about how it will play out. Naomi was more focused on the pit crew – preach – than learning the moves, much to Todrick’s chagrin. But I mean, how cute was flirty Naomi? Todrick then triggered Monique’s PTSD by adding cartwheels to the dance, and while Naomi dazzled Todrick by being the best and Trinity nailed it, Monique still had no idea how they are done. Which is me. When it came to learning the individual portions Monique seemed to do better and vowed to sell the performance when it is time. Trinity couldn’t get out of her head, Naomi proved to be limber – and damn that is hot – and Monet did not miss a damn beat. And everyone should be nervous.

The sponge queen followed up killing the moves with a visit to the podcast sharing how excited she was to redeem herself. It was cute, but nothing compared to Monique’s recording where we learnt that she was once a 300 pound, ex-gay minister while in the seminary. Colour me gagged and gooped. Like, I assume, the congregation of the ex-gay ministry. Naomi was adorable and personal and I’m so sad we didn’t see much of her in the early episodes. Trinity was charming and polished, and TBH, is playing harder for the crown than Glenn is her long overdue Oscar this year.

Coronation Day arrived with the queens discovering current Hall of Famers Chad, Alaska and Trixie were waiting for them to announce that they will be deciding who wins this season. Psyche, they’re just there to perform in the song, be BAE and remind them what is at stake. They started discussing track records, reminding Naomi that she tragically doesn’t have a chance and that Monique and Monet need to push hard to win. Oh and Alaska is Team Katya, which is iconic. With that the past winners left the queens anxiously get ready, with Trinity unsure how she will overcome Monet in the performance. Naomi was feeling more excited rather than nervous, Monique was feeling on edge.

With that the previous winners joined the queens on stage for the final performance, with Monet continuing to slay the episode, never missing a beat. Monique was living her best life and damn I am so proud of her. Naomi may not have had the best verse, but damn did she sell the performance while Trinity showed that her nerves were misplaced, nailing her performance. On the runway, Monet’s All Star Eleganza was beautiful and polished and showed how far she has come from season 10’s runway. Monique stunned in a layered black, Naomi, obviously, stunned in a shiny, Louis Vuitton inspired look while Trinity served, quite literally, a Wedgwood inspired number. Complete with china.

The judges loved everything that Monet did this week, thrilled that she came back with a vengeance and elevated her drag. Carson thought Monique looked the best she ever has and Todrick was thrilled to see her perform the hell out of the number. And everyone was grateful that she showed her true self throughout the competition. Everyone lived for Naomi’s look and felt she had fun with the choreography, while Trinity received universal praise for nailing the entire competition. The queens were then tasked with explaining why they deserve to win, with Monet sharing how important the show was to her growing up and she  wants to be that for someone else. Monique was thrilled to prove that true grit pays off and being a fighter makes her worthy of a win. Naomi explained that she wanted to prove that hard work and believing in yourself is enough. Trinity shared that she doesn’t feel entitled to win, but that she has earned it.

With that, the judges deliberated and sent Monet and Trinity through to the top two, effectively eliminating my loves Monique and Naomi. Despite not having as strong a track record as the other finalists, Naomi well and truly slayed the competition. While a lot of people had written her off as a fashion queen that snuck by thanks to her glorious legs, this season her confidence allowed her talent to shine from the start, serving inventive looks, hilarious reveals and slaying the house down whenever she stepped near a lip sync.

Plus, she was the only person brave enough to eliminate a threat and give zero fucks. Which is more than enough to earn her a Bahnaomi Smalls.

There is nothing I love more than stuffing buns full of meat and gobbling them up, and this little baby can definitely explain why. Spicy, sweet, tart yet still melt in your mouth, this bahn mi is an explosion of flavour that keeps you coming back for more. Like Naomi’s killer performances. 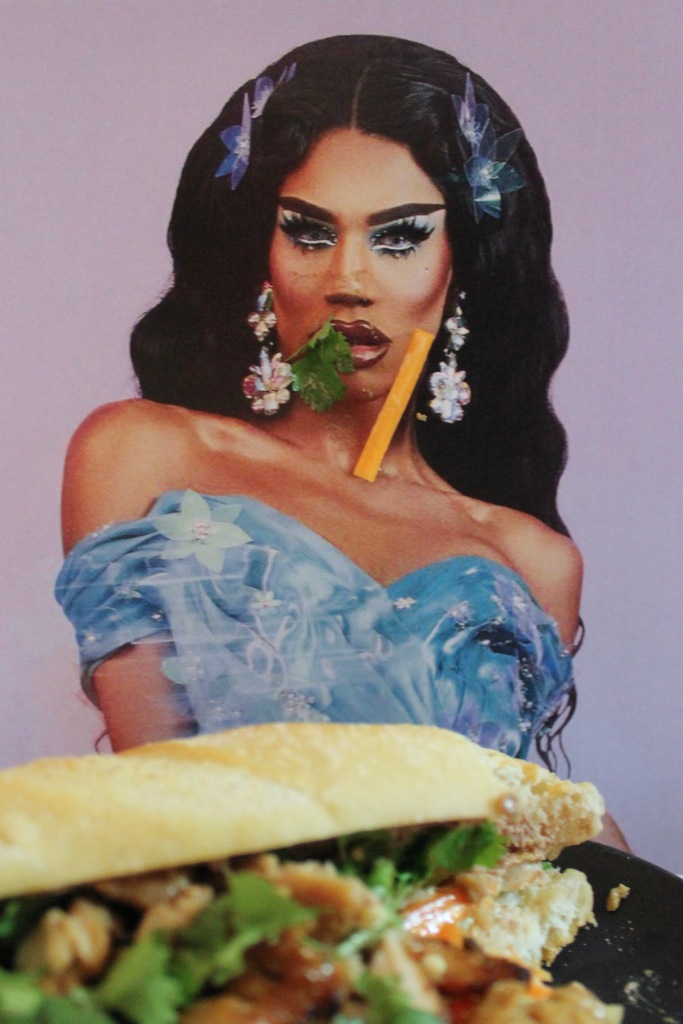 Method
Combine the garlic, ginger, fish sauce, muscovado sugar, mayonnaise, lime and chilli in a large bowl and toss with the chicken. Cover and place in the fridge to marinate for a couple of hours.

To cook, transfer the chicken to a lined baking sheet and place in the oven to cook for twenty minutes, or until cooked through. Remove from the oven and allow to cool slightly before slicing and tossing through the cooking liquid.

To assemble, split the buns, smear one side with mayo and  the other with pâté. Layer with pickled carrot and daikon, cucumber and chicken. Drizzle with soy and sprinkle with coriander before devouring, greedily.