Previously on All Stars the queens were tasked with making over their best Judys, in honour of Queen Judy Garland. It is hard to make jokes about the pure joy on the queens’ faces as they were reunited with their besties, so I will just focus on the fact that Manila’s husband was completely feeling his oats and Latrice’s Judy seemed unimpressed by her long-gestating drag debut. Monet rudeemed her horror season 10 makeover and once again Naomi slayed the challenge, snatching victory and handing Naomi her first win of the season. Sadly for the best Drag Race Judys, Latrila landed in the bottom and Naomi took advantage of the opportunity and cut Manila from the competition.

Back in the Werk Room the queens were gagged, gooped and living for the frontrunner going home, however Naomi was quick to explain that she was threat and she wanted to eliminate her. End of story. Plus – Latrice saved her the week before. Trinity however was shocked and disappointed, given Manila has slayed the competition and this is the first sign that no one else is actually playing fair and as the new frontrunner, she should be concerned. Talk turned to the fact that Latrice didn’t seem phased by Manila going home, despite the fact Manila sobbed during her first elimination. While she didn’t say it exactly, she admitted that she is happy to be there. Which is not a bad thing to say, no? Particular when in a her or me sitch. Monet then proudly admitted that she too had Manila’s lipstick out of revenge for her picking her lipstick when Latrice was first eliminated.

And her pettiness is how I function on a daily basis, and I love seeing it reflected back at me on screen.

The top five returned the next day, proud to have made it as far as they have with Monique particularly proud – and likely gooped –  that the Hall of Fame is one step closer to having some melanin. Before they could learn more about Trinity’s experience being the only white queen, Ru arrived to announce that this week’s challenge would see the queens starring in a Ru Hollywood Story on the fictional making of Sex and the City 3. After snatching victory Naomi was given the job of assigning roles and surprisingly took the other girls advice after challenging herself by taking the role of SJP. Monique requested K Jo – one episode guest star Kristen Johnson – before Trinity and Monet literally scissor, paper, rocked over the role of Kim with the former winning out, leaving Monet to take Kristen. Oh and Latrice must have requested Cynthia, or gave zero fucks. Despite getting lemons, Monet vowed to slay the challenge. And given how Latrice and Naomi went in rehearsal, that should be easy. Except Monique is literally twitching out as a recently awoken coma patient, I don’t see anyone topping that.

The queens joined Ross to film the shequel – and promote The Standard which is amazing, so I’ll let it slide – with Latrice and Naomi continuing to flounder, reminding Trinity of Club 96. Speaking of Trinity, she too struggled – much to the delight of Monet – before Monique arrived and revived the scene. Despite losing her wig, she was the perfect balance of absurd and wacky.

Elimination Day rolled around with Naomi nervous about her risk backfiring, and Monet feeling confident about her performance despite being flat. Talk turned to Trinity’s performance as Kim, with Monet arguing she would have slayed the role and Trinity kinda sucked. Before that could escalate however, Latrice spoke about being worried about who she would have to send home which is a gag. Trinity vowed to be fair while Latrice felt that the winner needs to be a good representative of Drag Race. Oh and Monique is looking to be gagged and gooped by Trinity going home.

On the Kitty Cat Couture runway Trinity served African cat gang bang realness, Monet channeled the Pink Panther – which I slay on the piani, FYI – Latrice served arts and craft Lion gown realness that Party City wouldn’t dare to stock. Naomi played with the theme channeling a cat lady drowning in yarn, while Monique owned with the sexiest Puss in Boots I’ve seen since Antonio Banderas did Original Sin and Adam Garcia was in Bootmen. Well buss, but you get what I mean. We then had to sit through the acting challenge which followed in the tradition of My Best Squirrelfriends Yada Yada Yada and Breastworld, completely sucking outside of one person. This person being my dear friend Monique, who literally dropped into the scene and immediately stole the show. Well except for the brief moment of Woke Charlotte courtesy of Monet.

Trinity’s runway look received universal praise, as did her role in the acting challenge. Monet’s look was read for being more mouse than cat, while Felicity Huffman defended her performance in the scene by pretty much saying you can’t polish and turd. So I assume is voting for me to lend a script for season 11? Latrice’s look wasn’t read enough given how ugly it was, while was praised for being the most in the scene. Everyone loved Naomi’s take on the runway theme, however her performance in the scene was universally panned. However Ru did congratulate her for challenging herself. Finally, FINALLY, the judges were gagged and gooped by everything Monique did and she was praised for owning the entire episode. And seeing her face made me happy that she finally got redemption for not winning the episode she wore the card dress. Not that I’m bitter. With that Monique and Trinity obviously snatched the win, sending Monet, Naomi and Latrice to the bottom.

Backstage Monique was thrilled to finally get the recognition she deserves, while Latrice was disappointed that she is in the bottom despite performing well. Completely ignoring how ugly her dress in. Trinity and Monet caught up, with the former praising Monet for having a strong report card. Naomi told Trinity she felt that Latrice should go because she hasn’t been performing well, conveniently focusing on report card when it matters to her. Monet joined Monique to plead her case, with Monique acting shifty making Monet nervous. Trinity told Latrice that both Monet and Naomi said that she should be eliminated, firing her up and saying that Naomi has also been performing poorly and should go home. Latrice then confronted the queens who stood by the fact she should go home, which was insanely effective in defusing the situation. Trinity and Monique then joined together to discuss who should go, praising Latrice’s legacy though differing on Naomi’s performance.

The queens de-pussed for the lip sync to Janet Jackson’s When I Think of You and given we saw next to nothing from Monique who owned the entire episode, it was quite clear that Trinity would win. She then doubled down on focusing on report cards and sent Latrice from the competition again, despite being an absolute bloody legend.

While Latrice was obviously disappointed to be out of the competition, again, it was easier to handle closer to the end and after having some of the winning moments she deserved to have. Particularly after being robbed of victory in episode one, no tea no shade. In any event, we laughed, we cried and toasted a job well done with a heart batch of Latriced Voroyale. 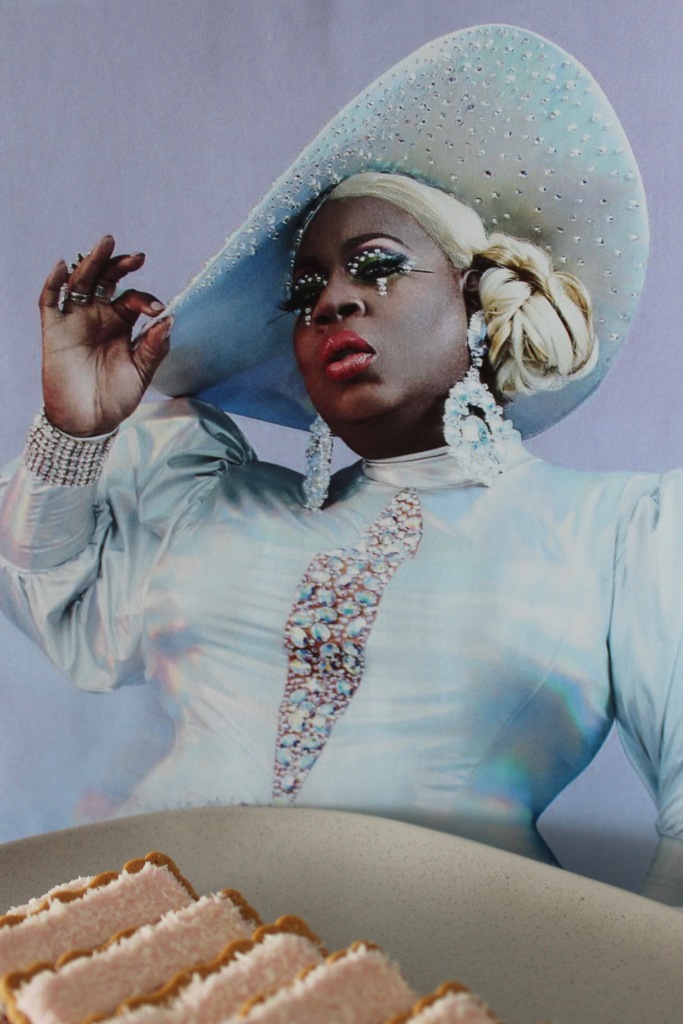 This copycat of the Australian classic I found online – or at least I assume it is just an Australian treat – brings back fond memories of childhood birthday parties. Where I would usually avoid them in favour of BBQ chips, despite BBQ chips being the worst. Thankfully this homemade version is far better than the OG, packed full of butter and fresh jam, the flavour packs more of a punch and fills you with joy.

Cream 60 grams of butter and the raw caster sugar in a stand mixer until light and fluffy. Still mixing, beat in the egg until just combined. Add the flour and baking powder and beat until just combined. Shape into a disc, wrap in cling and transfer to the fridge for 15 minutes.

Roll the dough out until 4mm and cut into 24 4x5cm rectangles using a fluted pastry wheel. Place on a lined baking sheet and transfer to the oven for ten minutes or so, or until lightly golden. Allow to cool for 15 minutes before transferring to a wire rack to cool completely.

To ice, combine the remaining butter with the marshmallows in a small saucepan and cook over low heat until smooth. Fold through the icing sugar and remove from the heat. Spread the coconut on a plate. Working fast, spread icing along both sides, leaving a one centimetre strip down the middle. Dip the biscuits in coconut to adhere to the icing. Repeat until done before filling the barren gap with jam.

Leave to set for an hour or so to set, before devouring.