Previously on RuPaul’s Drag Race, the queens ventured to Breastworld where Monét, Asia and Aquaria shone brightly. On the flipside, Kameron struggled with the lead role – despite the greatest Yetta to ever grace the mainstage – and Eureka faded into the background. That was until they were forced to lip sync for their lives where they well and truly bought it, pounding the ground in unison and slaying Ru to the point they both shantayed … which was convenient since I watched the episode with Laganja.

The continued top six returned to the Werk Room with Kameron and Eureka thrilled to still be alive in the competition, much to the chagrin of Aquaria. Who. Was. Well. Pissed. She then when to town talking about how disappointing it is for her to not be in the top five now since she has slayed the competition, while someone who is obviously Kameron has skated by. Though since Kameron won last week and Monét and Cracker have never had a win. Thankfully this pissed off the rest of the girls, particularly Asia who was annoyed by how rude she was being and just didn’t want to hear it.

The queens ruturned to the Werk Room the next day with Aquaria immediately taking the time to apologise to both Kameron and Eureka, and thank Asia for checking her. Boo. Damn gurl … is she playing for Miss Congeniality? Ru dropped by for this week’s mini challenge where the queens would be required to masc it up and pose for the campaign for his new body spray trade. Kameron was up first chopping wood, while I was obviously getting … even before he spoke about coming and taking off his shirt. BRB, I need to go … do … something. Aqauria obviously struggled, Monét was hilarious though couldn’t seem to take his flair out of his butch look. Eureka was eerily masc, Cracker has a tight body and while Asia struggled to be masculine, the lip licking near did me in. Once again poor Kameron was robbed of his victory, with Eureka taking out the win.

We weren’t allowed to dwell on Kameron’s robbery for long with Ru introducing six social media influencers and challenging the queens to make them over into their drag sisters. On account of her win, Eureka was tasked with pairing up the girls and the influencers and based of Ru reading Aquaria for being nice last week, she is going to be shady as hell with these partnerships. Monét was paired with Tyler Oakley, Chester See was given to Cracker, Aquaria was paired with Kingsley, Anthony Padilla and Kameron were paired to give us some sexy fan-fic, Asia was given Raymond Braun which left Eureka with the closest one to a drag queen already, Frankie Grande. Much to everyone’s concern since they’re both as loud as each other.

The influencers got to know they’re queens, with Asia putting her pageant coaching skills to good use bonding with Raymond immediately. They then looked through Asia’s wardrobe and Raymond fell in love with a large sequinned jacket – which is amazing – and since Asia is glorious, she vowed to make a matching jacket for Raymond and use it as a base for their look. Monét and Tyler were getting on famously, lining up a name – Short Change – and laughing a lot. Much to the nerves of Asia and Raymond, since they believe they need to focus. We then checked in with Miz Cracker to discover that – gag of the season – Chester See is straight which made me extremely uncomfortable … but I’ll be inclusive. Cracker was nervous about how she will do, on account of being quiet, reserved and having a beard – on top of the heterosexuality.

Meanwhile over with Frankie and Eureka, Frankie was giving the not-so-brief history of his life on Broadway, trying to make it in LA and Big Brother. We then learnt that our fan-fiction is gone to shit as we learnt that Anthony Padilla is also straight which made Kameron as nervous as me. Kameron tried to explain hyper feminine drag and they both just seemed super awks. Lastly we checked in with Aquaria who still struggles to assemble sentenced, though part of me think that this time it is because of a crush on Kingsley. Though … maybe that is my replacement fan-fic? The queens put the men to work trying to walk in heels and it was glorious.

Ru dropped by to see how Chester and Cracker were getting along before praising Chester’s junk in the trunk. Ru was concerned about the fact that both of them are hyper reserved before sharing that Cracker needs to get out of her head and just let go. Meanwhile over at Tyler and Monét, Tyler was also praised for being thick and / or juicy which made him hella red. Though they don’t seem to have a gameplan for family resemblance, so it could be interesting. Anthony was scared about letting Kameron down due to his straightness, before Kameron said he wasn’t attractive leading to Ru wanting to beat him down and me beat him off. They then named her Kelly Michaels and Ru wanted to key her car. Raymond was still living his best life in Asia’s jacket by the time Ru arrived to check-in with Asia sharing that they are really similar and are getting along famously. Frankie continued to be way too much which is perfect for familial resemblance since Eureka is also too much. Eureka then admitted she was crafty when pairing up the queens and hoped to send some of the girls home. Speaking of which, Aquaria was making it appear like the plan backfired, full of confidence and ready to own the challenge.

Frankie proved to have something likeable, with Eureka identifying he has massive balls. Which TBH, is enough to make me give him a chance. The queens put their drag babies to work practicing in heels, except for Cracker and Chester who instead focussed on practicing and solidifying their bond. So that Cracker can finally snatch a win.

Elimination Day rolled around with the influencers being glued, shaved and snatched for the runway. Anthony and Kameron continued to bond about being quiet, Tyler shared his lack of self-confidence and that his fear on The Amazing Race was having to show body. Raymond questioned Eureka about her plan when pairing up the queens, with Eureka admitting she was hoping to lead someone down the the path of elimination. Raymond – kween – then asked why that included herself. While that made the queens cackle, it was interrupted by the unveiling of Miz Cookie who was loving herself sick like Alyssa Edwards. But damn, was she beautiful.

On the runway Ru brought the Vanjie references back after a one week hiatus, Vanjie-ing off said runway to make way for the queens and their drag family members. Asia and America O’Hara looked glorious in their jackets, Eureka and Eufreaka – which sounds like a certain salad, no? – looked like Ursula does Dynasty with a mini side-kick. Aquaria and Capricia Corn were both wearing red, but that is kind of the only thing looking the same. Despite having matchy make-up. Cookie and Cracker slayed and let’s just hand them this week’s win. Monét and Short Change didn’t really pull of family, but they looked fun and Monét looked great sans the pussycat. Kameron looked great, obviously, though Kelly wasn’t really selling the family resemblance. Though I wouldn’t have messed with them in High School.

The judges loved everything about Asia and America, and Eureka and Eufreaka, they didn’t get Aquaria and Capricia and rightfully felt Cracker and Cookie slayed the competition. They felt Short Change was beautifully thick and Monét looked stunning, though that they had missed the point of having a familial look. They didn’t love Kameron and Kelly, feeling the looks were basic and that they also missed the point of having a family resemblance. Ultimately Asia and Eureka were safe – much to Frankie’s disappoint not to win – before Cracker snatched her well deserved first win. Once again Kameron found herself in the bottom two before Aquaria was saved and Monét sent in to lip sync, much to Tyler’s annoyance. As they are wont to do, both Monét and Kameron turned the lip sync out. There was hair tossing and both girls channeling their drag essence before Kameron started cartwheeling and doing the splits, and Monét slid down the runway and busted a light. Ultimately Aquaria was correct that there would be no more saves as Kameron was once again lived to sync another day and poor Monét sent from the competition in sixth place.

As a close personal friend of the ‘the Drag Queen’ drag family and its broader circle, I knew Monét would be heartbroken to have been eliminated. And have to cop the shade of previous reigning Bob. So instead of dwelling on her robbery, I focused on how she slayed the competition and should be a shoo-in for the finale in the inevitable All Stars 4. Lest there be no more rigga morris, amirite Shangie? Anyway – we laughed, we death drop fake-outed and smashed a shit tonne of Honey X Changken. 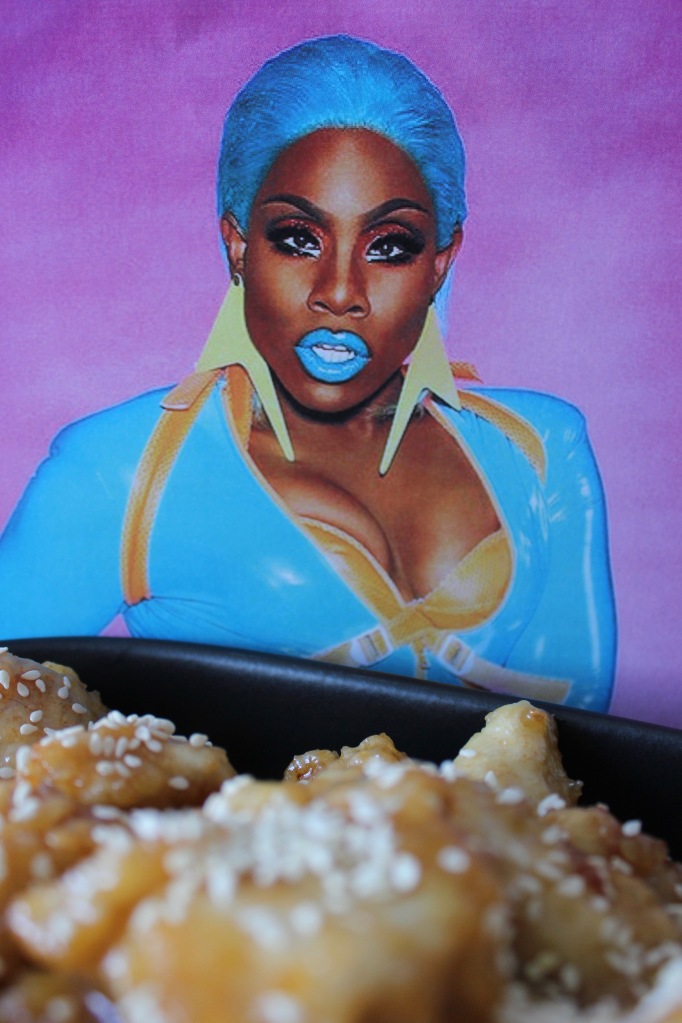 Method
Combine the quarter-cup of cornflour with the flour, baking powder, half the water, egg and a good whack of salt and pepper, to taste, until a smooth batter forms. Fold through the chicken pieces, cover and leave to rest for an hour.

When you’re ready to get super-fry, heat 1-2 inches of oil in a dutch oven until piping hot. Working a couple of pieces at a time, cook the chicken for a couple of minutes, or until crisp, golden and most importantly, cooked through. Transfer to paper towels on a cooling rack and repeat until done.

To make the sauce, heat the sesame oil in a pan over high heat. Add the garlic and ginger and stir-fry for a few seconds before adding the cornflour, followed by the honey, sake, remaining water and a good whack of salt and pepper. Remove from the heat, toss through the chicken and serve immediately, garnished with sesame seeds.