Previously on All Stars the queens had to make on-brand products and commercials, with Alaska and Katya landing in the top while Roxxxy remained most on brand by landing in the bottom and being saved by her friends over a more deserving queen.

We landed back in the work room where Alaska’s edit took over from Phi² and commenced crumbling by having an attitude with Katya – who for the record, would have sent Roxxxy home – and then dancing around, toppling over the edge of confidence and landing face first into cocky and obnoxious.

Then she opted to admit she would eliminate threats if given the chance, making Roxxxy’s survival start to make sense.

Thankfully Ru arrived the next day to distract me from my Alaskan wine induced rage to announce that this week the queens would each be making over a family member on the main stage.

So yes, my wine rage quickly turned into heartbreak and tears.

Oh yeah, then Roxxxy’s grandma/mother who rescued him after he was abandoned at the bus stop happened. It was fucking emotional.

Then the Anastasia of Anastasia Beverly Hills arrived to give them a brow tutorial.

After a short break to vogue the house down – flooding Michelle’s basement in the process – the queens and their family walked the runway, with Detox and her sister looking stunning and Katya and her mother dominating as a Russian mail-order bride and her peasant mother … landing Alaska, Alyssa and Roxxxy in the bottom. For the first, second and fifth times.

The queens then returned to the workroom to deliberate where Alaska proceeded to have an epic meltdown, ending with Katya’s killer Adore Delano dig callback from the the start of the episode, Detox questioning Alaska’s behaviour while she tried to bribe Detox into saving her.

It wasn’t pretty. At all.

Thankfully for Alaska – and maybe Detox’s bank account – Detox won the lipsync and saved the Rolaska- part of their clique name and sent poor, sweet, lovely fourth alternate Alyssa back back back back back out of the competition again and for another visit to my kitchen.

Despite the drama surrounding her second exit, Alyssa was still the upbeat queen we know and love … but maybe that had to do with the fact she had more rolls to fall back on, in the form of my Strudalyssa Edwards. 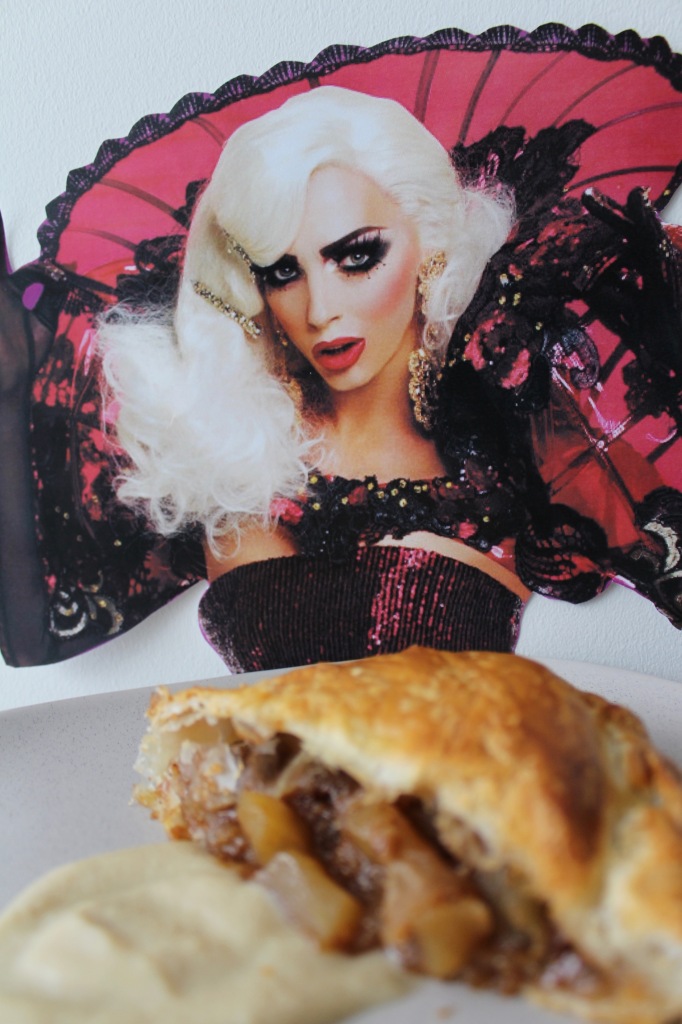 Like the head of the Haus of Edwards, my strudel is sweet, warm, completely delicious and bulging with delight. At the back. Rolls.

RIP – again – sweet Alyssa. Condragulations Katya, for when you pull a Jinx 2.0.

Method
Combine the raisins and lemon zest and juice in a small bowl, hell a mug even … not one that you’d beat though, ok?

Anyway, melt the butter in a large pan over medium heat and add the apples frying for a couple of minutes until coated. Add the water and sugar, and simmer, stirring, for about ten minutes or until soft, yet holding their shape. Remove from the heat, and stir through the raisins, juice/zest, cinnamon and arrowroot. Cover, set aside and allow to cool completely.

While things are getting as frosty as the internet’s opinion of Rolaskatox, preheat the oven to 180°C.

Lay all of the sheets of pastry on a bench, split the apple filling amongst the pastry, covering half of each sheet, fold the pastry in on itself and roll the edges in to seal, place on a lined baking sheet and brush with milk to glaze.

Place in the oven and bake until golden, puffed and crisp – about half an hour. Serve warm with custard and devour.