Previously on Survivor, the Millennials and Gen X tribes were no more as the tribes dropped their buffs – in addition, I assume, to Taylor and Figgy’s busy pants dropping schedule – and Jeff threw a third tribe into the mix, much to Michaela’s sassy chagrin. Thankfully the situation didn’t get any worse for our reigning Queen of Fiji with new Vanua heading to tribal council and CeCe continued in the season’s tradition in booting minority female.

We opened back up at new Vanua where the old, olds were proud of themselves for flipping to the youngins … on the one tribe they had numbers on, much to Zeke’s delight.

Meanwhile over at the new Ikabula tribe, Jay started on his winner’s edit in earnest while breaking my heart, searching for the hidden immunity idol to protect his fellow millennials like he would his mum and sister. Oh and when he wins he is buying his mum a house.

Swoon town – I think someone wants to take Kengel’s place in my heart.

Thankfully Michaela arrived on scene impersonating Jack Nicholson in The Shining to catch Jay and Will and add some humour to the scene and save me from feeling genuine emotion.

I assume feeling threatened by Michaela’s killer screen presence, Jiffy Pop arrived for a reward challenge where Figgy commenced digging a hole when seeing CeCe had been booted and her ally saved. Jeff kindly distracted the tribes from her stupidity to show them the array of sweets up for grabs during the blindfolded challenge.

That actually gives me an idea …

Anyway after a massive come from behind victory, Zeke and Michelle secured reward for their tribe and – of course – Queen Michaela took out second place for her Ikabula, before Hannah collapsed … on the sidelines, while not competing in the challenge. But hey, I get panic attacks so I’m not one to judge. Well, shouldn’t be at least.

After watching Figgy cry over missing out on reward, we returned to Vanua to watch them feast on their reward and listen to Zeke commence severing ties with the fellow kids. Over on Ikabula, Hannah walked Sunday through the fun of panic attacks while on Takali, Figgy and Taylor commenced making out – I assume for Figgy to reenact the Halle Berry role in the Monster’s Ball sex scene – and considered bringing their relationship out into the open.

Obviously Jessica and Ken were not shocked. At all. In the slightest.

Thankfully it gave Kengel the opportunity to display some killer sarcasm. Say what you will about it being the lowest form of comedy (fuck you, it is my life blood), this proves Kengel is hot and funny …  so I’m looking into venues for our December wedding.

Almost as if Jeff knew someone else was making a claim for my heart, he returned for an immunity involving my favourite item – BALLS! Despite a decided lack of ball puns, Michaela saved the challenge by once again unleashing the – to quote Alyssa Edwards – BEAST and singlehandedly won immunity for Ikabula by barking orders at Hannah and ensuring she wasn’t a hindrance.

Not one to rest on her laurels, she then commenced barking orders to Michelle and Zeke, coaching Vanua to victory and sending Takali to tribal council to boot another Gen Xer.

Sadly for her, Adam decided to flip from the bottom joining Ken and Jessica to break-up the lovebirds and vote out Figgy. Thankfully despite the fact it was pretty obvious she was going home, Jeff added some fun to tribal by offering to marry them, then and there. Again sadly, that didn’t happen.

While Figgy was obviously disappointed to find herself booted pre-merge – I mean, will TayTay dump her for it?! – I was quickly able to turn my friends’ frown upside-down (we met while working in radio in Nashville) and dry those tears with a batch of delicious mini Figgy & Prosciutto Tarts.

Like the Figster, these babies are a little bit sweet, puff and wild, and quite tarty – but isn’t that why we love her, and them? 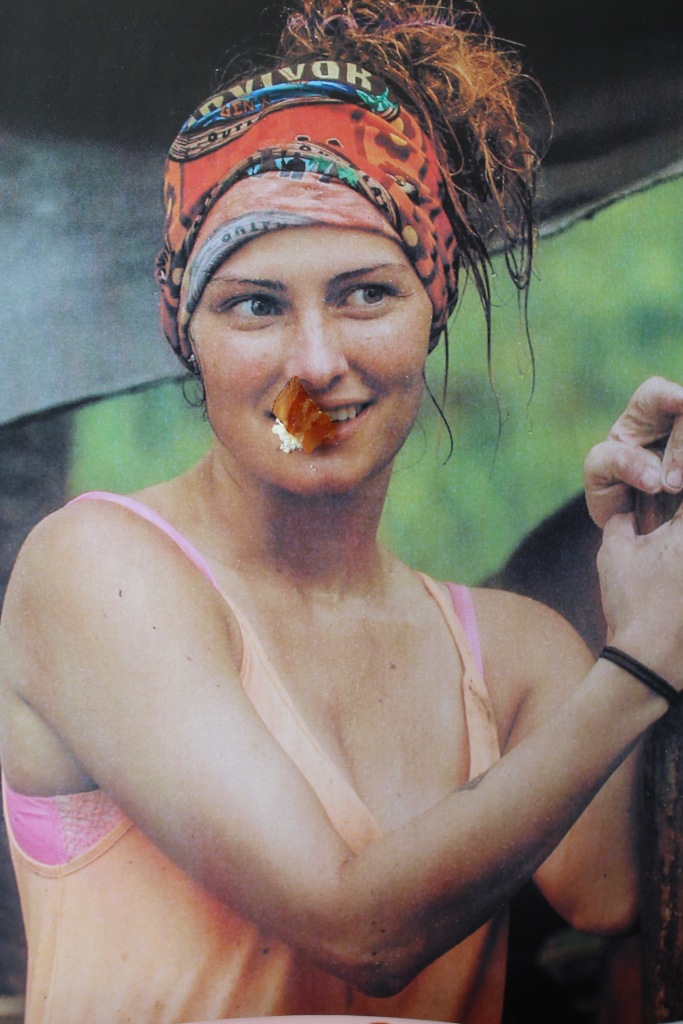 Place each sheet of puff pastry on a lined baking sheet – they can share, if they fit. Slather each generously with fig jam, top with prosciutto and crumble over the goat’s cheese.

Chuck them in the oven and bake for fifteen minutes, or until puffed and golden.

Devour as you cry over the horrific separation of figtayls. Oh-oh.