After kicking things off with EGOT recipient Reets and a semi-sweet trip down memory lane with my dear(ly departed) Jack, I thought we needed to bring back the funny for day three. And, obviously, there is no man that has won exactly three Emmy Awards (that I can be bothered looking up) funnier, that I can call a friend than Chevy Chase.

I’ve known Chevs for years, after meeting in Betty Ford – who fun fact, gave me free treatment at the clinic as we’re also dear friends – in the ‘80s and becoming the fastest of friends. While there were obviously some issues between us after he dropped the N-bomb on the set of Community and refused to make me play his son in the newest Vacation movie, I found a way to forgive him.

Anyway being a betting man, Chevs was keen to get straight to work after a brief catch-up. Given the fact two of his Emmys are for writing, I bequeathed him the great honour of discussing all – yes, all – the writing categories.

Obvi, Big Little Lies has Outstanding Writing for a Limited Series, Movie or Drama Special, while he backed Saturday Night Live – again, obvi – for Variety Series, I think it’s going to go to John Oliver or Samantha Bee. As far as the series categories go, Aziz and Lena have the comedy wrapped up for the sublime Thanksgiving episode of Master of None. We again disagreed on the drama winner, Chevs going for The Handmaid’s Tale, while I think the Duffers’ will take it out with Stranger Things … as a consolation for losing Outstanding Drama Series.

As you can imagine, what with two disagreements, we needed something hella hearty and comforting to get us through. Thankfully my Spinachevy and Chase Rolls more than fit the bill.

Fresh, spicy and dripping with cheese, these are my favourite kind of rolls this side of Alyssa Edwards’ backrolls. 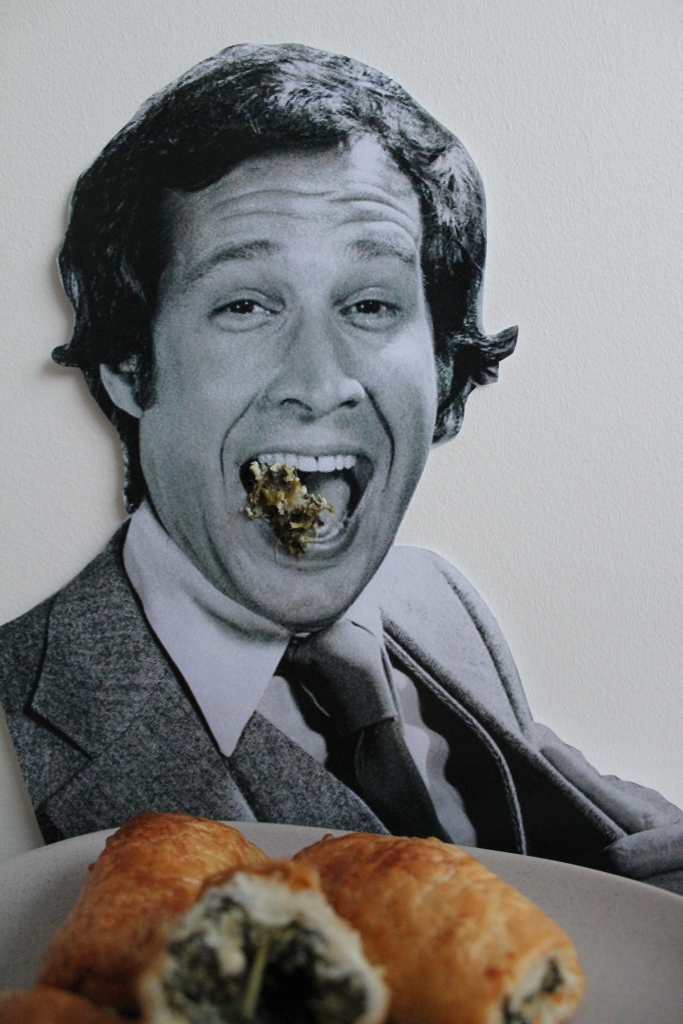 Combine the spinach, feta, parmesan, dill, onion, breadcrumbs, zest and salt and pepper in a bowl.

Split the mixture into quarters and roll each portion into long – puff pastry length – sausages and place along an edge of the puff pastry. Brush the edge of the pastry and roll to enclose, ensuring the seam is on the bottom. Cut into three and place on a baking sheet. Repeat the process with the remaining three quarters.

Brush each roll with eggs and bake for 25 minutes or until golden, crisp and flaky. Devour.

3 thoughts on “Spinachevy and Chase Rolls”