Previously on All Stars, Ru brought Coco out of the home to compete again – she is going to die soon, so she wanted to make her happy – Raven Symoné broke Adore’s heart and in turn, Adore broke ours, a thankful Tati couldn’t make lightning strike twice during Snatch Game, Ginger was eliminated after Katya was given a shitty character in Princess Di, Alyssa do-wa’d her way out … before ruturning for ruvenge with Tati and eliminating editing victim Phi².

The queens ruturned to the work room for the last time where Katya once again confessed to Roxxxy that she would have sent her home, had she won the lip sync, poor Roxxxy had to defend her performance and Detox called out Alaska’s shitty behaviour to which she gave a an equally shitty apology.

To quote Tati, choices. Maybe we are going to see Katya snatch the krown?

The next day, Michelle arrived to deliver the final challenge – to form an All Stars Supergroup to rival the late, great Seduction. You thought it took two to make a thing go right? Nope, four … or three and poor Roxxxy who doesn’t really count rapping amongst her core skills.

Despite such a strong start to the season, Roxxxy hasn’t risen to the top like she did during Monsoon Season but she did win me over with her new found attitude and kindness. So when Ru did what -laskatox couldn’t – despite saying she wouldn’t be eliminating queens this season – and told Roxxxy Andrews to sashay away, I was happy to be able to comfort her finally end our years long feud.

Obviously I met her at the busstop and took an immediate dislike when she was collected and I wasn’t, despite the fact it started my journey to imposing myself on rich, Hollywood women like Zsa’s and Vandy for guidance.

While Roxxxy could have been upset to be cut just before the final lip sync, she was almost jubilant by the time we caught up for some Fricaxxxy Andrews. Maybe because she was one of the true winners of the season, getting her rudemption and winning our collective hearts.

I mean, hey, it wasn’t her fault her friends kept saving her. 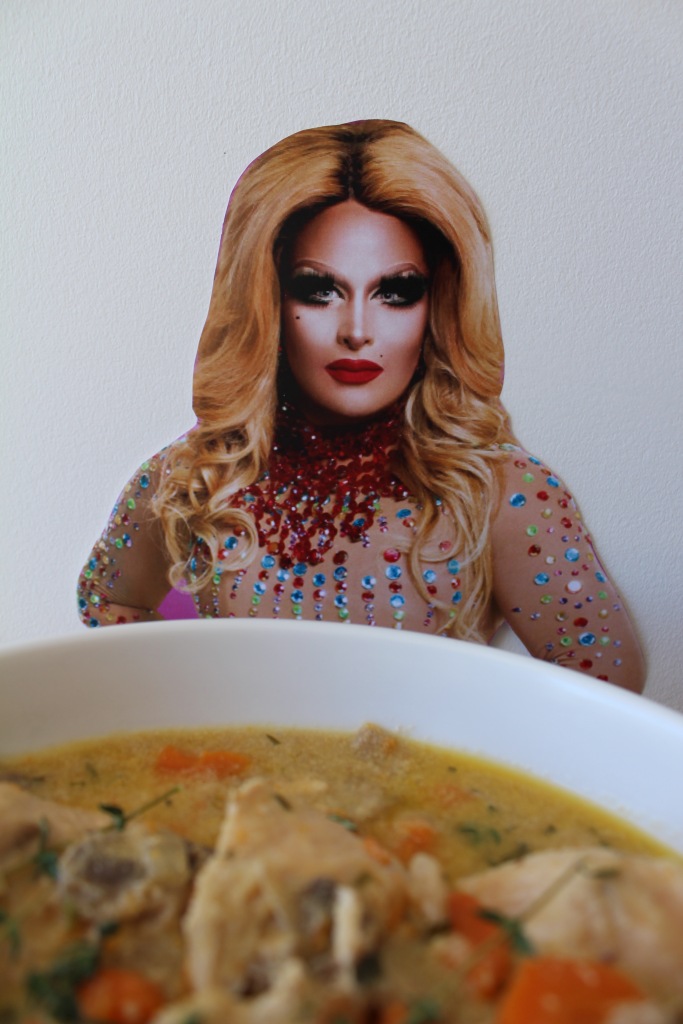 Like Roxxxy 2.0, my fricassee is warm, loving and enriches the soul. I mean, it probably won’t be winning any culinary crowns but it is definitely not the kind of thing to land you in the bottom … over and over and over again. 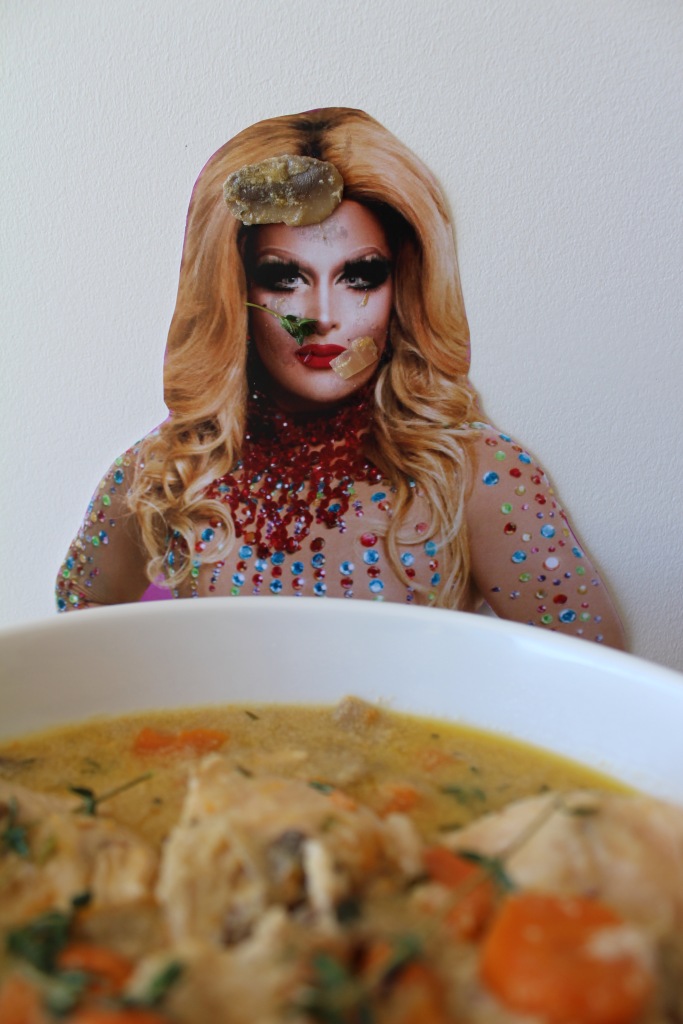 Combine the flour in a bowl with a good whack of salt and pepper. Add the chicken, toss to coat and transfer to a plate.

Heat a lug of oil in a large, heavy-based, oven/flameproof casserole dish over medium heat. Add the chicken a couple of pieces at a time and cook for a couple of minutes each side, or until browned. Transfer to a plate and repeat until done.

Once the chicken is down, add the onion, carrot and celery to the (thick and) juicy pot and cook, stirring for about five minutes, or until softened. Add the mushrooms and garlic and cook for a further five minutes.

Return the chicken to the pot, being mindful of not adding in too much extra liquid lest you want it to look a bit oily, like mine. Crank the heat to high, add the wine. When it is almost all absorbed/evaporated, add the stock and bring it to the boil.

When it is going crazy, remove from the heat, cover and transfer to the oven to bake for an hour or so, uncovering for the last fifteen minutes.

Once cooked, transfer the chicken to a plate, cover and keep warm.

Return the pot to a medium heat on the stove and continue to cook the sauce until it has reduced slightly. You may not need to do this if it reduced enough in the oven, use your judgement.

Once reduced, turn the heat to low and stir through the cream and tarragon and cook for a further  five minutes, or until the sauce has thickened back up slightly. Add lemon juice, season, remove from the heat and devour with bread or mashed potatoes … in honour of our rudeemed, thick and juicy queen.