While Ru went back on her word and stepped in to eliminate Roxxxy just before the final lip sync, there was never any doubt that Detox would make her way to the top three after a season spent slaying the runway and invoking Roger whenever he was out of drag.

I mean, sure she ended up in the bottom during Snatch Game but she wasn’t to know that Nancy Grace was a cursed Snatch character and probably would have dominated if she could have done Roger.

Plus, she truly wound up in the bottom three to fill out the numbers if we’re being honest.

So picking back up in the finale, Detox dominated the rap portion of the final challenge, killed the podcast despite a Rolaskatox mention from Ru, almost broke her neck dancing on the chairs and looked absolutely beautiful – again – on the final runway.

Her true winning moment of the finale though, was being the voice of everyone during Alaska’s first and second tantrums, the latter where she compared Katya to Jinx and inferred that she would only lose if Detox and Roxxxy brought her down again.

Sadly though, that was her only winning moment of the finale finishing as one of the co-runners up behind … well we’ll get to that tomorrow, shall we!

As I often say, I am terrified of frying so these are a baked alternative to the classic fried Mexican favourite … but don’t hold that against them. Like Detox, these little babies can pack a punch with minimal effort. Smoky, hot and all at once delicate and bold, these taquitos are my second favourite way to eat rolled meat. 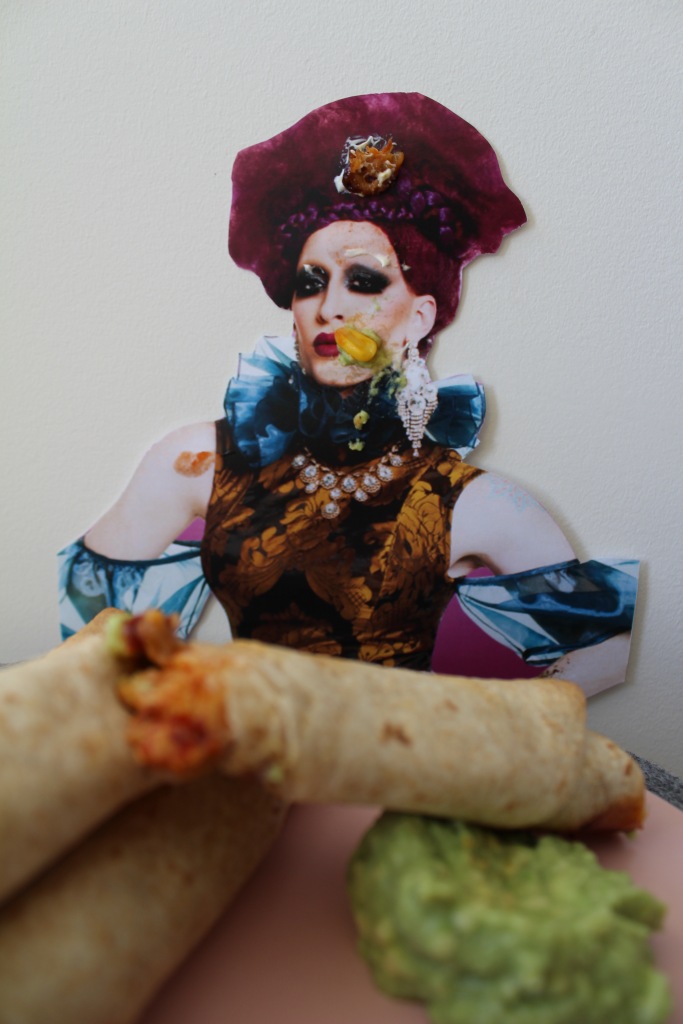 Heat a lug of oil in a medium pan over medium heat and cook the chicken, stirring, for five to ten minutes, or until browned. Add the onion and garlic and cook for a further five minutes.

Remove from the heat, add the chipotle and adobo, sour cream, capsicum, corn, onion, cheese, spices, herbs and a good whack of salt and pepper, and stir to combine.

Take out the tortillas, place about two tablespoons of mixture close to one of the edges, tightly roll and place on a baking sheet, seam down. Repeat the process until done, place them close together to try and keep them all rolled.

Brush lightly with oil and bake for 20 minutes, or until crisped on the top.

Serve, generously covered in sour cream, guac and salsa – of the Struthers variety if you have the time … which I clearly did not – and devour.