Previously on RuPaul’s Drag Race, the queens were tasked with creating ads for RuPaul’s three new dating apps. Despite having a small role, Asia owned the competition and delighted Michelle and Carson, while Mayhem was forgettable and Yuhua floundered in the bottom. Ultimately Mayhem got noticed in the lip sync, saving herself and sending Yuhua out of the competition.

The queens ruturned to the Werk Room where Mayhem vowed to avoid the bottom two for the rest of the season and to fight, while Monet pulled yet another sponge out of thin air and offered it to her to elevate her look. Staunchly against the damn sponges, Asia was shocked they kept manifesting before everyone congratulated her on her win … despite borrowing gloves from Blair. Monique was acting quiet, leading to her sharing that Eureka had stirred shit up in untucked and told her that Mayhem threw her under the bus on the mainstage. While Monique kept coming for her, Mayhem stood her ground and said everyone is so loud that sometimes she never gets a chance to talk. She then vowed to take all the girls out and Monique was ready to go to damn war.

Ru arrived mid-way through the queens reading Monet’s flat Nene Leakes hair for the mini-challenge, where the queens would be required to photobomb famous images. Miz owned Venus Williams, Monique cupped the Jonas bulge to glory, Eureka was flat with RiRi, Asia served comedy face with Will and Kate, Mayhem destroyed TayTay, Dusty Ray was a vision as one of Oprah’s children, Blair St scared Bey, Monet cosied up to Mariah, Kameron schooled the Trumps, The Vixen was boring with Grumpy Cat and Aquaria didn’t like the stank of Kim K and Kanye. Despite Monique going for peen, Aquaria took out the win and gave us a triumphant return for Shawn, albeit briefly.

With that out of the way, Ru announced that this week’s mainstage challenge would feature an end of the world ball – Alaskan Winter Realness, Miami Summer Realness and Martian Eleganza Extravaganza … for when the world ends from global warming. The queens then beat the crap out of each other to grab supplies, with Monet hacking away at an expensive fabric she couldn’t work with, much to Asia’s chagrin. Though at least it wasn’t featuring sponges this time. Kameron was focusing on his head – holy basement flooding, batman – Miz Cracker was focusing on her spacewoman look and was desperate to prove she can slay the runway and her first week wasn’t a fluke. Thankfully she channelled the spirit of Vanjie, and as long as that keeps happening she will never falter.

Monet continued to struggle with the sewing, leading to Asia winning hearts and helping all the queens with their sewing and guiding their looks. Aquaria was one of the few queens not struggling, channeling Milk’s paper doll look … much to Blair, Monique and Miz’s confusion since it is just shapes stuck to underwear. Eureka was busting zippers, Monique was praying for some elasticity to help her out and Dusty was burning and cutting himself whilst still being a sexy Sideshow Bob. While she was proud of her steampunk look, Blair was concerned since it is just metal attached to a corset.

Ru arrived to chat to the girls, starting off by talking to Asia about her drag pedigree – throwing shade at Phi Phi in the process – and her sewing prowess making costumes for Kennedy Davenport and Alyssa Edwards in the past. I mean, she even hemmed a skirt for my girl Dolly – she knows what she’s doing, darlin’. In any event, her killer Tweety last week has everyone’s expectations sky-high and I feel that may bight her. Aquaria was confident about her ability to turn a look, though couldn’t repeat the phrase for the promo. The Vixen was channelling Roxxy’s fave colour, ter-quwaz, before telling Ru that she is a known fire starter though didn’t touch on the drama she’s been dragged into in untucked. Blair was channeling old Hollywood glamour, though struggled to overcome looking like a toddler. That being said, he was loving being underestimated. Monet was confident in his ability to turn a look before Ru called out his love for short wigs. While it is easier in real life, the other queens feel she needs to step it up if she wants to win drag race.

After Ru left the girls to finish their lewks, Blair joined Asia in helping the other queens before Miz Cracker started to doubt herself for not adding enough to her outfit. Monet ran her idea by Eureka, I assume because she wanted to make sure the lack of clarity from her sponge look isn’t repeated. Blair shared with Asia that she feels like she is the mother of the group, leading to Asia sharing about the loss of hers parents. On the opposite end of the spectrum, Miz Cracker addressed NYC rumours about Aquaria having a sugar daddy which she emphatically denied … though Miz broke the fourth wall and pleaded that she would like one. Everyone spoke about accents in particular Eureka’s twang before Monet taught the girls that the British used to speak with an American accent before losing it after returning to England. I love her, but damn, that is some bad schooling she had.

On the mainstage, Kameron, Aquaria and Blair owned Alaskan Winter Realness, while Monet and Dusty Ray were underwhelming and Asia was a mess. Shoutout to Monique being inspired by that one time Beyonce said watermelon. Miami Summer Realness saw Mayhem, Kameron, Aquaria and Miz Cracker slay, while Monet’s dress looked unfinished and Asia was an assault on the senses. Kameron and Aquaria continued to own by the time we got to Martian Eleganza Extravaganza, as did Blair and Miz Cracker. On the flipside, Monet was like the painter implies – good from far away, but a mess up close – The Vixen looked terrible and Dusty didn’t really channel Mars.

Mayhem, Eureka, The Vixen, Monique and Blair were deemed safe, leaving the remaining queens to be critiqued. Despite her confidence, the judges read Monet for filth. Kameron Michaels was universally beloved, as was Aquaria. The judges liked one of Dusty’s looks, though felt the other two were an absolute mess and/or missed the point. The judges felt Asia was underwhelming, leading to her breaking down because she spent so much time helping others that she couldn’t finish her own looks. Miz Cracker also received universal praise.

Aquaria took out the win while Asia just missed the bottom, leaving Monet and Dusty to lip sync for their lives. Despite a dominant performance, Dusty couldn’t compete with Monet’s killer performance – complete with death drop fake outs, vogueing, real splits and hilarious gags – sashaying away, though not before being praised for tearing the house down by Ru.

I was ropable by the time Dusty arrived backstage, not because I wanted Monet to go nor because Dusty is one of my top two thirst traps of the season. Nor do I feel like anyone – outside of The Vixen’s final look – did overly worse, but because that lip sync was fire and to lose half of its performers is heartbreaking.

Dusty held me close – because I obvi exaggerated my pain – until my tears slowed to a trickle, before we reconnected, laughed, cried and all the usual jazz before settling in to toast her wonderful performance with a Dusty Ray Butters Chicken.

Silky smooth, this curry gets a bad rap as the choice of basic white people that can’t handle their spice (and by that, I tease people I know that order it) … but it truly is a beauty. Delicately creamy, lightly spiced, and well since it is me, packing a punch of chilli, it is everything you want from a night with Dusty. 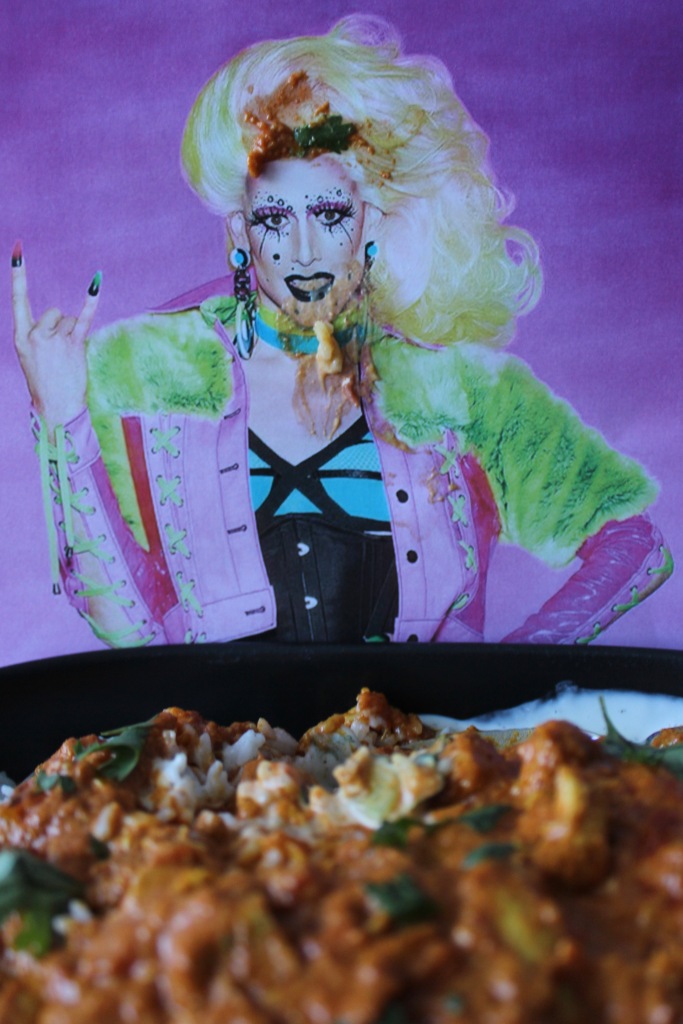 Method
Combine the diced chicken in a bowl with half the garlic, half the ginger, half the chilli, cumin, salt, ½ tsp of each the garam masala and turmeric, juice and zest of one of the lemons and the yoghurt. Cover and chill in the fridge for four hours to overnight, to let the flavours develop and marinade.

When you’re ready to get cooking, melt half the butter in a large pan over high heat, reducing to medium when foamy. Add the cardamom, clove, coriander and remaining garam masala, turmeric and chilli, cooking for a couple of minutes or until your kitchen is hella fragrant. Stir through the canned tomatoes and lemon juice before adding the marinated chicken. Reduce heat to low, cover and simmer for about half an hour, or until the chicken is cooked through.

Stir through the double cream and remaining butter, and season to taste. Serve immediately on a bed of rice with a sprinkling of coriander, while mourning the loss of Dusty.