Previously on RuPaul’s Drag Race, the queens went full Kardashian for a lip-sync musical extravaganza which upset Nina when she missed out on the role of Blac Chyna. While Shea – who did get the part of Blac Chyna – and Alexis slayed the competition, Farrah and Cynthia landed in the bottom two until – plot twist – they were saved by Eureka’s lingering knee-injury, as the the elephant queen sashayed away on crutches … to return next season.

We opened up back in the werk room as the queens reacted to the shocking medevac, where poor Farrah broke down. Wanting to distract me from having to witness true emotion, Alexis condragulated Shea on her second challenge win … before adding that she would have won if she’d gone better on the runway.

Still sad, Farrah didn’t take kindly to Nina joking that she had a sore knee that was fixed when she saw what happened to Eureka, asking the personal saboteur if she even wanted to be in the competition. After a shady back and forth between the queens, Farrah apologised and explained that she was just upset and jealous of how the judges receive Nina.

Wanting to take us back to shade town, Alexis outlined that she was more than ready to trim the fat and see Nina and her attitude go, along with Farrah and Cynthia who were just in over their heads. She thinks she is all powerful, which I assume is just what happens when you play Kris Jenner.

The next day Aja was exspecially excited to see Ru drop by the werk room to announce the moment we’ve all been waiting for; where basic bitches are separated from the fierce ass queens. Yep, it is time for SNATCH GAME – let’s see how many times Ru has to ask, “but can you make it funny” this year!

Trinity announced that she would be playing Amanda Lepore, Shea will be throwing phones as Naomi Campbell and Peppermint will be doing Nene Leakes … which should be amazing. Much to Ru’s absolute delight, Nina is doing the iconic queen Jasmine Masters, while Sasha will play Marlene Dietrich and hopefully be able to overcome her own inability to crack jokes.

Alexis is finally bringing Liza to the Snatch Game stage which will be a loving tribute … that brought out Ru’s first make-it-funny of the walk around. Cynthia will be doing Roxxxy Andrews’ abandoned character Sofia Vergara which should be a good character for her considering she can trade cucu for boobs.

Scrap that, her sneak peek for Ru was terrible.

As a parting gift to the queens, Ru announced that tomorrow’s runway challenge will be a do-over of the Night of 1000 Madonnas with kimonos a no-no, obvio-o.

At Snatch Game we learnt that Aja was playing Alyssa Edwards, Farrah was doing Gigi Gorgeous and Valentina was traumatised as Miss-Universe-for-ten-seconds, Miss Colombia. Almost straight out of the gate Alexis, Nina and Sasha stole the show while Peppermint, Farrah and Cynthia bombed. Really, really badly. Let’s take a moment of silence to reflect that Eureka left last week so that we could witness the trainwreck that was Cynthia’s portrayal of Sofia Vergara.

The next day the queens returned to the werk room to prepare for the anything-but-kimonos runway where Peppermint spoke about her gender identity and how drag helped her realise that she was a woman. The queens gathered round to talk about how much they love and support her, ruturning the competition to RuPaul’s Best Friend Race in the process.

Alexis, Sasha and Valentina slayed the runway, while Peppermint and Shea, and Trinity and Nina produced a pair of double ups. Despite being the stronger of the Material Girls, Peppermint’s Nene was read for absolute filth – as expected after her terrible performance – and Nina’s weaker 2013 Met Gala Madonna was saved by her killer Jasmine Masters.

Thankfully for Farrah, her runway saved her from herself and Cynthia’s deflated chest/moustache combo landed her in the bottom two again, this time with Peppermint. As hard as the cucu queen tried, she once again struggled to hit her lines … and was absolutely slayed by Peppermint. Who then reversed back over her and ran her over again before shooting her with a mime-gun.

Meaning Cynthia Lee Fontaine sashayed away in tenth place, the same place she finished in last season … continuing in the tradition of this season of Survivor’s jury. Once again, illuminati confirmed?

As you can probably guess, I’m a dear, dear friend of Cynthia having meet years ago at a club – that I co-owned with J.R. Ewing – in Dallas. Our connection was instantaneous and we unofficially formed a Cucu Clique and vowed to have each other’s back.

While we had a brief falling out after I was enraged by the absurdity of wearing THE shorts from season 8, we pushed aside the silliness when she got sick and have been closer than ever since.

Sure she was disappointed to come in tenth again, Cynthia and her cucu were just so grateful to have been given the chance to compete again. Plus … this time she had me waiting in the wings to cheer her up with a delightful Cynthia Lee Fontina Frittata.

Fresh, rich and totally delicious, this frittata is like being wrapped in a hug of pillowy egg. It isn’t fine dining … but who cares when it taste this good? Enjoy! 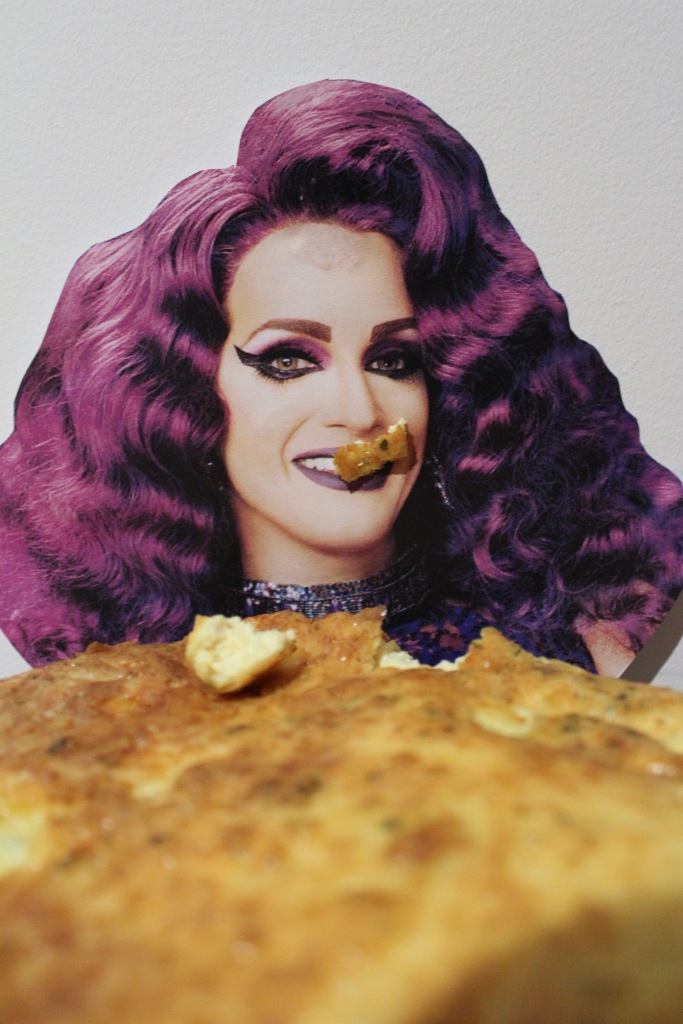 While the veggies are getting delightful and soft amongst the prosciutto, whisk the eggs, sour cream and parsley in a bowl with half of the cheese and the salt and pepper.

Crank the heat to high, add another lug of oil and pour over the egg mixture. Give a very quick stir and then leave to cook for a couple of minutes, or until the edge of the frittata is set.

Sprinkle over the remaining cheese and transfer the pan to the oven and bake for about twenty minutes, or until golden and set.