Previously on RuPaul’s Drag Race, Ru put the girls through their paces to write a verse on the remix of Category Is, had them guest on his podcast What’s The Tee?, lip-sync to their aforementioned verses on the mainstage and kill the runway. They all slayed which made me extremely relieved when Ru, Michelle et al opted to stick with the final four rather than a final three for this year’s finale.

Oh … but this week is the reunion which means we’ll either get some interesting tee or an hour to catch up on emails ahead of next week’s finale.

Ru started things off asking Alexis why she was happy to read people but couldn’t take it, at all. While she desperately tried to defend herself, the other queens called bullshit. To test if she had learned to take it, as she had said, Ru declared the library open and had the queens read each other, with Charlie and Jaymes actually doing well mocking Aja and Valentina respectively.

As far as reunions go, we’re running at a B- thus far.

Farrah reenacted her infamous post-Eureka-elimination reaction, instantly giving us a bounce back to a B+. We then got to relive the shitshow that was maskgate before Shea and Sasha started laying into Valentina, which lead to Alexis trying to defend her … earning the wrath of Shea. Valentina’s intense fans were brought up before the queens once again got angry at Valentina for letting her fans viciously troll them.

Rise Villaintina and thank you for making this ru-union worth it.

We then learnt Valentina was a standoffish, aloof psycho, Nina still felt that people other than herself were sabotaging her and Kimora stepped up and became the most rational voice of the reunion, telling Nina to air her issues or shut the hell up. My girl Kris Jenner then called in to congratulate Alexis on how well she played her in the musical challenge, Farrah told some funny jokes … and Valentina was crowned Miss Congeniality by reigning cucu-congeniality.

And this is where it started to earn its A+!

Aja was inspired by my boy Kanye calling out Tay-Tay and called bullshit on Valentina being congenial and told her she is the fan favourite, not Miss Congeniality. Farrah then told Valentina that she was hurt by the way she just stopped communicating with her after the show, despite being so close. Then literally everyone jumped in to talk about how horrible Valentina was to work with, before Trinity pointed out that whatever the title is, taking out fan favourite is like being the true winner of the season. Once again, Trinity is life.

Then … THEN, Mama Ru dropped the bombshell. Instead of next week’s finale being a couple of pre-rehearsed personalised lip syncs and filler performances leading up to the crowning, Peppermint, Sasha, Shea and Trinity would all be involved in a four-way, lip-sync battle royale to decide the winner of the season, putting the fear of yes gawd into Shea – who despite an unrivalled track record, now has an actual hurdle to claiming the crown – and I assume, got Peppermint thinking she should start writing her acceptance speech, given she is a lip sync assassin.

It also made my girl Violet Chachki – who I was watching the episode with – extremely happy that this rule wasn’t in place back in season 7, given Ginger Minj’s abilities. I was quick to point out that she, my dear friend V could still turn out a lip-sync, we both sat silently for a minute, shook, wondering if she had dodged a bullet two years ago. 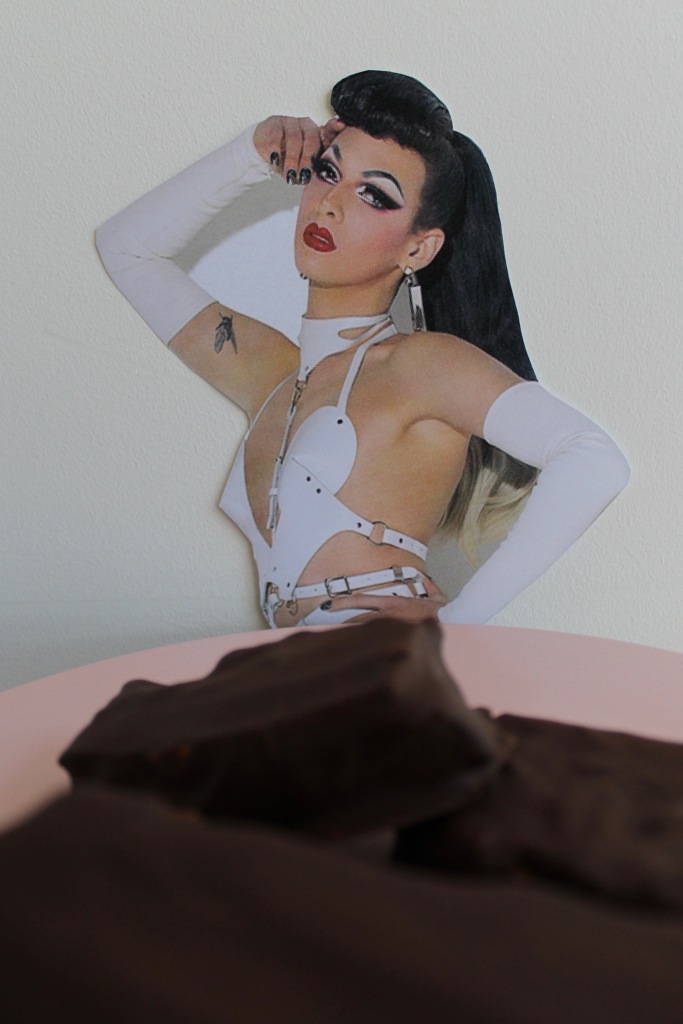 Now I know Violet Crumbles are such a big thing outside of Australia, but they are essentially the same thing as a crunchie. And by that, I honestly could not tell you a difference outside of their names. And the brands.

Either way, you can’t go wrong with honeycomb, cut into pieces and coated in chocolate. Ever. 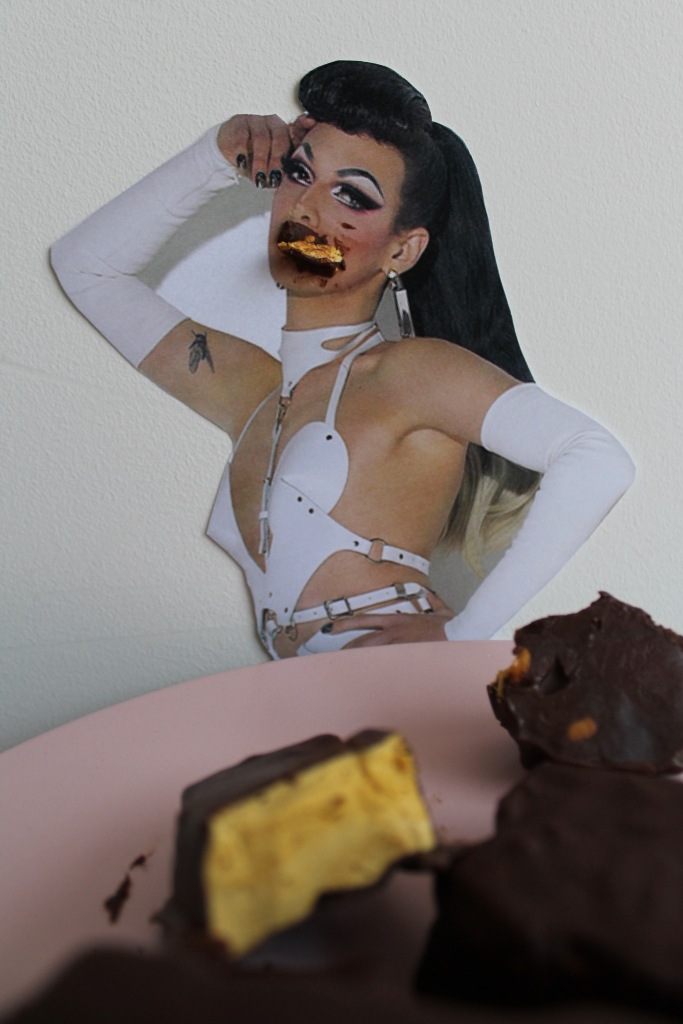 Ingredients
1 recipe of / store-bought honeycomb, which I’d give you if it weren’t going to spoil a later date – mine makes a 30x40cm baking sheet’s worth
400g chopped chocolate, I went dark but you can do milk if you’d rather

Method
Break your honeycomb up into bite size pieces, I don’t really care about going for the perfect store-bought look.

Melt the chocolate in a heatproof bowl suspended over a pot of boiling water, ensuring the bowl doesn’t touch the water. Aka a double boiler. Remove from the heat when the chocolate has just melted.

Line another baking sheet and working piece-by-piece, dip the honeycomb into chocolate and place them on the tray. Once the bases are done, spoon chocolate over the top and smooth out to completely coat them. Place in a cool dry place to set for about an hour, before devouring.