Previously on RuPaul’s Drag Race, the queens split into two teams to host rival morning TV shows, where Naya Rivera sassily kicked the boot into Trinity’s team while Shea and Sasha’s choc-broccoli fiesta saw them rise to the top, securing a year’s worth of burgers … which is arguably the best possible prize. After their disaster, Trinity and Charlie landed in the bottom two with a thud where Trinity turned it out and Charlie sleep-walked, slept-walked – what is the freaking past tense in that sitch? – her way out of the combination.

Back in the werk room, Trinity wasted no time removing Charlie’s message while the queens wondered like the rest of us, why Charlie just gave up during the lipsync. Not wasting any time bringing up the shade, Farrah asked Trinity how it felt to be thrown under the bus by her teammates – reigniting the great Eureka/Trinity feud of episode 1.

After congratulating the girls on their victory, Nina and Alexis vowed that their time was coming which is either foreshadowing of their victories … or impending downfall.

The next day Ru arrived in the werk room for the first mini-challenge of the season, where each queen was required to take a selfie with the pit crew. I don’t know about you but I was moist, gurl.

Alexis won … but let’s be honest, I didn’t see what any of the queens did with the pit crew there.

Ru wasted no time announcing this week’s mainstage extravaganza – and musical I’d secretly love to see happen – Kardashian: The Musical, requiring the queens to dance, act and lip sync to the greatest story ever told about the American dream. Victory gave Alexis the right to assign all the roles where she obviously cast herself with the best role – Kris – gave North to Eureka, Kim to Cynthia, Kylie to Farrah, Kendall to Valentina, Kourtney to Aja, LiLo to Sasha, Paris Hilton to Trinity, Britney Spears to Peppermint, Blac Chyna to Shea and Khloe to Nina.

Cynthia, Aja and Nina didn’t seem thrilled with their casting, while Farrah was living for her role as Kylie. Eureka and Shea got their K on before we learnt that Eureka has been carrying around a busted knee since the cheer challenge, meaning we may get to see some epic crutches action on the runway.

Meanwhile Nina continued her pity party of one, complaining to Aja about the part she was lumbered with – which is offensive, given that Khlo is the people’s K – before unleashing her inner saboteur.

The queens made their way to learning the khoreography where Eureka was confident that she would slay as North, despite being krippled. Nina was hoping Shea would choke, while she instead shone as Blac Chyna. Meanwhile Nina and Aja struggled to get the choreography down, whilst Farrah and Valentina couldn’t get their clap together.

The next day, the queens started to prepare for their performance where Trinity and Eureka bonded over the latter’s injury and Aja’s nose lost weight, before Eureka continued her rudemption tour and apologised to Sasha and Valentina for her eating disorder joke last week, where Sasha spoke about her past with anorexia, Valentina opened up about her continuing struggle with food and Shea shared her experience with bulimia.

With RuPaul’s Best Friend Race out of the way, Meghan Trainor arrived looking like an absolute fuckwit wearing a unicorn onesie.

Moving past that monstrosity, the queens slayed the musical performance … well almost all of them. Cynthia struggled to put any sync in the lip sync portion of the challenge, while Valentina and Farrah continued to miss coordinating their clap.Thankfully Shea made up for their failings and stole the show as Blac Chyna.

Shea and Peppermint stood out on the runway, while Eureka killed on her crutches and Cynthia and Nina struggled. When it came time for the judges critique, Nina broke down and spoke about her self-sabotage and paranoia, Cynthia was read for not knowing the words and Farrah was called out for not bringing any character to Kylie.

Ultimately Shea took out her second mainstage win – due to Alexis’ boring runway look – while Cynthia and Farrah found themselves in the bottom two, lip syncing to on of fuckstains, fuckstain songs.

As you probably figured out though, both Cynthia and Farrah were safe as Eureka became the first queen in drag race herstory to be medevaced from the competition (Farrah’s ugly cry was everything). While she was heartbroken to be going home so soon, she wasn’t too disappointed though given that Ru invited her to compete again next season.

Oh and I – her dear friend that tried to undermine forty-six of Trinity’s pageant performances – was on hand to whip up a healthy and delicious Eufreekah Salad. To be honest, that was probably the thing that cheered her up. 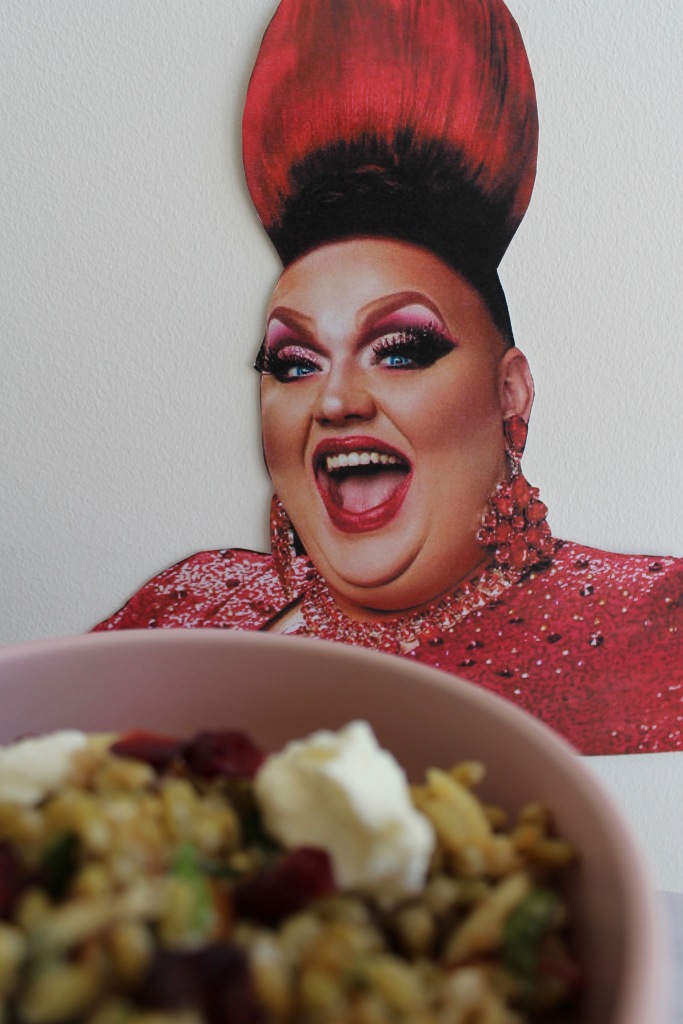 Spicy, tart and a little bit sweet, this salad pretty much sums up Eureka’s personality … which we will get to enjoy again next season, this time without the feud. Oh and I should probably mention it is fucking delicious, but that goes without saying, right?

Method
Soak freekeh overnight  in a large pot of water, before draining and rinsing thoroughly. Add 2 ½ cups of fresh water and bring to the boil with the cinnamon, bay leaves and zest. Once getting as fiery as Trinity and Eureka, reduce heat to medium-low and simmer for about an hour, or until al dente. If you need to add more water, add more water, I don’t mind. Once ready, drain, rinse and cool.

While the freekeh is softening like Eureka’s final stint in the werk room, combine the eggplant, capsicum, herbs, craisins and almonds in a bowl with a good whack of salt and pepper. Add the freekeh to the bowl and stir to combine.

Add the ground cinnamon, cumin, juice, maple syrup and a lug of olive oil, and stir to combine. Top with some dollops of labneh, stir … and devour while you wait patiently for Eureka’s return next season.