Previously on RuPaul’s Drag Race, the queens made over the crew where Nina decided the top six was the perfect time to learning to sew … then decided against it, Alexis continued to be basic, Peppermint was saved by her killer new drag sister, Shea went for a Beyonce/Solange sorta vibe, Sasha had more fun than we’ve ever seen and Trinity made sure her little drag sister had a tuck as tight as hers … and wasn’t afraid to get aggressive about it. Ultimately Nina and Shea landed in the bottom two where Nina put in fractionally more effort than Valentina and Charlie – but only just – before sashaying away from the competition.

Back in the werk room, the queens were feeling relieved to no longer have to deal with Nina’s negative attitude. Alexis then lead the queens in congratulating Trinity on her third win of the season, before they focused on the fact that Alexis continues to be read for filth by Michelle. Trinity then continued to endear herself to me, revelling in Shea finally landing in the bottom two. I mean, I love Shea … but Trinity is hilarious.

The next day, the queens returned to the werk room where we didn’t get any preamble on account of a bug attacking Trinity in her confessional. After the sitch was dealt with, Ru arrived for the mini-challenge requiring the queens to drag up a puppet of their rivals and read them for filth.

Shea’s Peppermint enjoyed some screamed laughter and hitting her human, Sasha’s Trinity was hilarious, wearing a landing strip of foil and talking about plastic and reading Nina Bo’nina Brown-Anne Kennerley, Trinity’s Shea mocked her make-up ability and love of Chicago. Surprisingly, Alexis’ Sasha was actually pretty funny despite not getting any laughs, on the other hand Peppermint’s Alexis was hilarious and got a lot of laughs.

Despite this, Sasha took out the mini-challenge before Ru announced this week’s mainstage challenge – the Gayest Ball Ever. Each queen is required to pull off three looks – Rainbow-She-Betta-Do, Sexy Unicorn – which Nina would have nailed – and Village People Eleganza Extravaganza.

Ru gave the queens the chance to decide which village person they would each play, which sadly backfired as there was no fighting and everyone was diplomatic. Peppermint took the leather biker look, Trinity the cop, Alexis the native American – which could go super badly – Sasha the cowboy and Shea the construction worker. Everyone seemed to be concerned about how Peppermint would perform, Trinity promised to shit glitter and Shea pointed out that Alexis isn’t doing anything individual and is similar to a lot of queens out there.

Mama Ru returned to check in on the queens where Sasha was feeling confident though was concerned about being too intellectual, while Alexis seemed to have a passion for turquoise and was hurt that she is constantly called out for being basic and Shea was feeling inspired to pull out a Vivienne Westwood inspired construction worker outfit. On his way out the door, Ru added that in addition to their three looks, the queens would need to perform a rhythmic gymnastics routine which could be horrific … or amazing.

Back in the work room, Alexis threw out pedestrian about Sasha’s look before Trinity threw shade at Shea’s Village People look. Things then started to get tense with Alexis saying that Sasha was insecure about her superior dance ability and only listened to Shea, before Sasha refuted that Shea was actually pissing her off in rehearsal too, giving us some more good old fashioned shade as we headed to the mainstage.

Despite the shitshow that was rehearsal, the rhythmic gymnastics was pretty hilarious – I agree with Ru, they are doping. Shea, Sasha and Trinity all looked amazing in the Rainbow-She-Betta-Do runway – despite Shea not having any colours of the rainbow flag – while Alexis was again, truly basic. And Peppermint was either amazing or awful, I can’t even tell. Sasha owned the sexy unicorn look, while everyone else looked a little too literal and dare I say it, boring. On the flipside, Trinity owned the Village People look and the rest felt underwhelming, despite the obvious workmanship of Shea and Sasha’s looks.

The queens were asked to nominate who should go home, with Shea and Sasha nominating Alexis and earning her wrath for not warning her about her basic looks again. Alexis and Trinity nominated Peppermint, while Peppermint went the competition route and nominated Trinity.

Poor Sasha missed out on taking out her third victory due to being too high-fashion instead of gag-worthy, handing Shea her fourth win of the season – and pretty much guaranteed herself the win, right. That left Alexis in the bottom two for being basic again, despite her contrary thoughts on the topic. Trinity’s saved herself with the Village People look, sending Peppermint to lip sync to macho man with Alexis.

Alexis tried to pull out the stops by adding a moustache but simply couldn’t compete with Peppermint’s energy, hilarious energy and epic Kris Jenner styled wig reveal. Seriously, Peppermint is the lip sync queen of the season …  which obviously resulted in poor Alexis Michelle sashaying away.

While Alexis was heartbroken to be eliminated she was kind of expecting it, given the quality of the competition. Obviously she flew into a rage when we caught up, blaming the other queens for not telling her the outfits would be read by Michelle. I in turn got caught up in the rage and inevitably fans the flames. Thankfully my Alexis Gozlemichelle is so delicious that we were just as quickly calmed by the food. 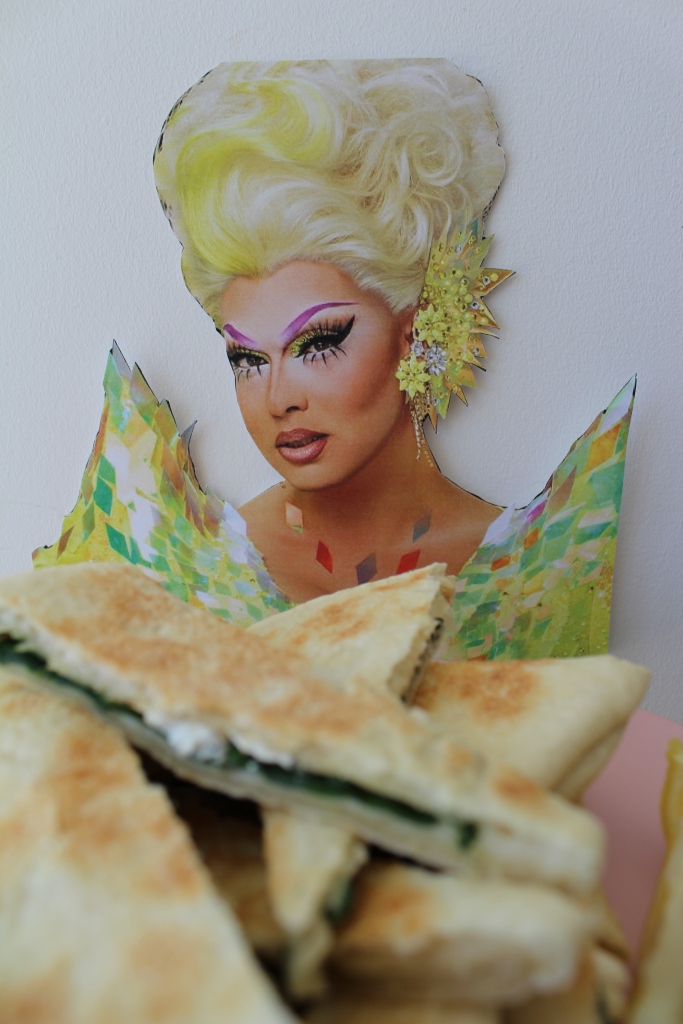 The gozleme being calming is quite ironic – or is it, I don’t ask Alanis – given that it is chock full of chilli … but there is nothing better than a warm, fresh, toasty bread. Plus … there is cheese and cheese is always the answer to any of life’s problems.

Method
Place the yeast in a jug filled with 300ml warm water, salt and sugar. Stir quickly and stand in a warm place for five-ten minutes, or until it is foamy and ripe.

Sift the flour into the bowl of a stand mixer, add the yeast mixture and oil and knead using an electric mixer fitted with the dough hook on medium for about five minutes, or until soft and springy to touch. Transfer to a lightly greased bowl and prove in a warm place for an hour, or until doubled in size.

Punch the dough back and split into quarters, rolling each out into a 30x40cm rectangle. Cover half of each with some spinach, feta and a good sprinkle of chilli before enclosing the dough, pushing the edges together to seal.

Heat a frying pan over medium heat and cook each gozleme for a couple of minutes each side, or until golden and crisp. Transfer to a plate and repeat until all the bread is done.

Cut the bread into triangles and serve with lemon wedges … before devouring.