Previously on All Stars the queens were group together to host legendary club nights with Valentina spending too much time in her fantasy, leaving Naomi to shoulder most of the work. On the flipside, Latrice and Trinity slayed with the help of Manila and her passion for graphic design. When it came time to deliberate Naomi was scared that Trinity would focus on saving her season 9 sister rather than looking at their overall performances. Not that she had to worry though, as Latrice turned the lip sync out and sent Valentina out of the competition.

The queens returned to the Werk Room to discover Valentina hated the reality of having to pack, before Latrice shared how hard it was to eliminate her since they’ve grown close after years on the road together. Naomi was feeling extremely relieved to have survived, particularly after discovering that Trinity would have eliminated Valentina too since she is making all of her decisions based on score cards. Talk quickly turned to said score cards, with it evident that Manila is way out in front with Trinity nipping at her heels and Monet and Monique the dark horses. Which Manila quickly deflected, saying she could be in the bottom next. Couple that with Monet saying she will do whatever it takes and damn, Manila, you in danger girl.

The next day the queens discovered that the Werk Room has been made over, with Ru’s photos all replaced by pictures of Judy Garland and everyone started to wildly speculate what it means. Ru opted not to leave the hanging, giving a history lesson on how Judy Garland indirectly kicked off the Stonewall riots and was a code for early gay men to identify each other which led to the term best judy for your gay best friend. And as such, this week’s challenge would see them do drag makeovers on their best judys. Naomi was paired with her bestie Ricardo who is BAE, Monique’s best judy was Danny – who was also kinda hot – Monet’s was also a hot guy named Patty, Latrice got her dear friend Tim, Trinity’s boyfriend arrived and, swoon, Manila’s best judy is her husband Michael.

Oh and in addition to them welcoming their best judy into their drag families, they also had to choreograph a dance inspired by Judy Garland.

The queens showed their best judys around the Werk Room before getting down to work. Not wanting history to repeat itself, Monet quickly grabbed some matching outfits and strategised how to snatch victory rather than go home. Despite looking nothing like Patty. Monique was thrilled to have new people to talk to, Trinity’s boyfriend was shocked by home good he looked in a wig and Manila and her husband couldn’t stop touching and I love it. After a stint in the bottom, Naomi was feeling the pressure to finally score a win – particularly since she won the makeover on season 8 – though given her judy can’t walk in heels, she in danger girl.

Ru returned to get to know the judys, with Monique sharing how important Danny is to him before Ru checked in to find out why Monique always looks like she is ready to cut a bitch during deliberations. They were all tender with each other and let’s be honest I can’t type properly through the tears. Trinity spoke about the awkwardness of dragging up her partner and tucking his junk. Monet and Patty – who met through Bob – spoke about their concerns about not looking alike, and TBH I want them to get married. Speaking of marrieds, we checked in with Manila and Michael with the former just glad that Michael will soon learn the pain of drag. Naomi and Ricardo were super cute, though poor Naomi was stuck inside her head and was super nervous leading to Ru giving her a pep talk about not playing it safe and to act a fool and I am ready to see it. Oh and then we learnt that Tim already has had attempts at drag, however Alexis Knight was put to bed the first time she appeared by Latrice. And this is her shot to finally sissy that walk.

Ru then broke down hearing how Tim carried Latrice through prison and damn, this is just as bad as Survivor’s love ones visit.

Elimination day rolled around with everyone overwhelmed by everything they needed to get done. Latrice was nervous to land in the bottom again, knowing it is certain doom, Manila and Michael had a dance break and Monet and Patty dazzled everyone as Patty’s beautiful red eyebrows were removed and he transformed into Powder. The judys were heartbroken to lose their facial hair while before Naomi shocked everyone by throwing out that she is planning to do boy drag on the runway. Monet was shaded for making Patty even paler, Michael was gagged by home beautiful he looks, Tim pretended he was happy with how Latrice did his make-up and Manila made her husband tuck so he would truly understand what she goes through. Oh and Trinity spoke about how big her manses dick is, which seems unnecessary.

Ru, Michelle and Carson were joined by my goddaughter Frances Bean and Meredith Grey on the judging panel as the queens and their newest sisters kicked off the dances. While Trinity’s boyfriend struggled, Manila’s husband had a little more rhythm, Monet and Patty slayed, Latrice and Tim gave energy, Naomi and Ricardo were awesome while Monique and Danny were adorable. On the runway Latrice and Alexis were all big hair and shiny but felt flat, Monique and Danny were staring down the barrel of victory, Manila and Michael were a royal flush, though didn’t look related. Naomi and Ricardo both arrived as Cher before Naomi removed her wig, twirled and turned into Sonny and I love it. Hand them the win. Trinity and her boyfriend looked alike in gaudy Miami old lady and while Monet and Patty were ebony and ivory, they looked alike. And let’s be honest, their dance was far and away the best.

Monique and her judy received glowing praise for their runway, though their dance – which I stand by calling adorable – was read for filth. The judges loved everything Monet did, with their dance being the stand out for all of the judges. To the point Frances soaked it in, geddit? Manila and Michael dance was praised, though the runway was read for filth and I am nervous. Particularly since Manila explained that Michael came into her life after Sahara died and it is all too emotional. Latrice’s dance was read for filth, though praised for her unending depths of charisma. Oh and they hated the fact they looked nothing alike. Obviously Naomi received glowing praise for everything and for doing things that nobody else would think of. Despite having basic choreography, Trinity and her boyfriend were praised for their synchronicity and slaying the family resemblance. Naomi made it two for two when it comes to makeovers, landing in the top with Monet while team Latrila would be broken up for good as they landed in the bottom together.

Back in the Werk Room Naomi was feeling her oats for finally snatching a win, while Monet was thrilled to get her rudemption after Tyler Oakley brought him down in season 10. Monet and Naomi split Latrila to hear why they each should stay, with Latrice reminding Monet how much being here means to her. And while Monet can understand that, she knows that Manila has slayed the season and as such, Latrice’s legacy isn’t enough when this season has been lackluster. Over with Naomi and Manila, Naomi thanked Manila for loaning her the mustache and congratulated her for slaying the competition. Talk turned to her being in the bottom with Latrice, with Manila saying she would rather stay over Latrice and not be taken out for being a threat. And damn, I am nervous. Particularly since she started tearing up talking about understanding whichever way it goes.

The girls swapped coaches with Monet torn, since Manila would have sent her home a few weeks ago and since she didn’t start with an apology, Monet felt like being shady. Manila though went the mindfuck route, hoping to embarrass Monet into keeping her since beating the best is the only way to be the best, apparently. On the other side of the room, Latrice played into Naomi’s hand reminding her that she saved her the week before … and look at how it turned out! Latrila got together with their judys to talk about the competition, with judys heartbroken for bringing them down leaving to poor Latrice to try and lift everyone else up and hold it together.

Monet and Naomi returned to the mainstage ready to destroy Judy Garland’s – who’ll be singing, for ye – Come Rain or Come Shine. Despite being a strong lip syncer, Monet couldn’t compete with Naomi who owned the lip sync from start to finish. She was wacky, wild, acrobatic and really took Ru’s advice, acting a fool and hilariously snatching victory and 10,000 doo-lahs. Not only did she own the lip sync however, she then stood centre stage, stone cold, and eliminated her idol, this season’s front runner, Manila for being a huge threat. Leaving everyone gagged and gooped.

Is it heartbreaking to see Manila slay the competition, only to be felled at her first stumble? Sure. Particularly since she and Raja both killed season 3 and All Stars 1 really screwed her. But, let’s be honest, these are the rules and Naomi taking out a threat is baller. I mean, Alaska would never eliminate a girl her loaned her an item for the mainstage. Thankfully Manila wasn’t too bitter about being cut, knowing that it was due to her winning ways rather than anything else. Plus – she pointed out it was totally my fault, since the pizza curse has leapfrogged from Survivor over to Drag Race with her comforting Maianila Luzon Pizza.

While I feel really bad about manifesting her elimination, I have zero qualms about eating something this delicious. Mounds of meat, chilli and cheese, make for the perfect salty accompaniment for my feelings of lingering saltiness to see Manila lose the crown. Again. 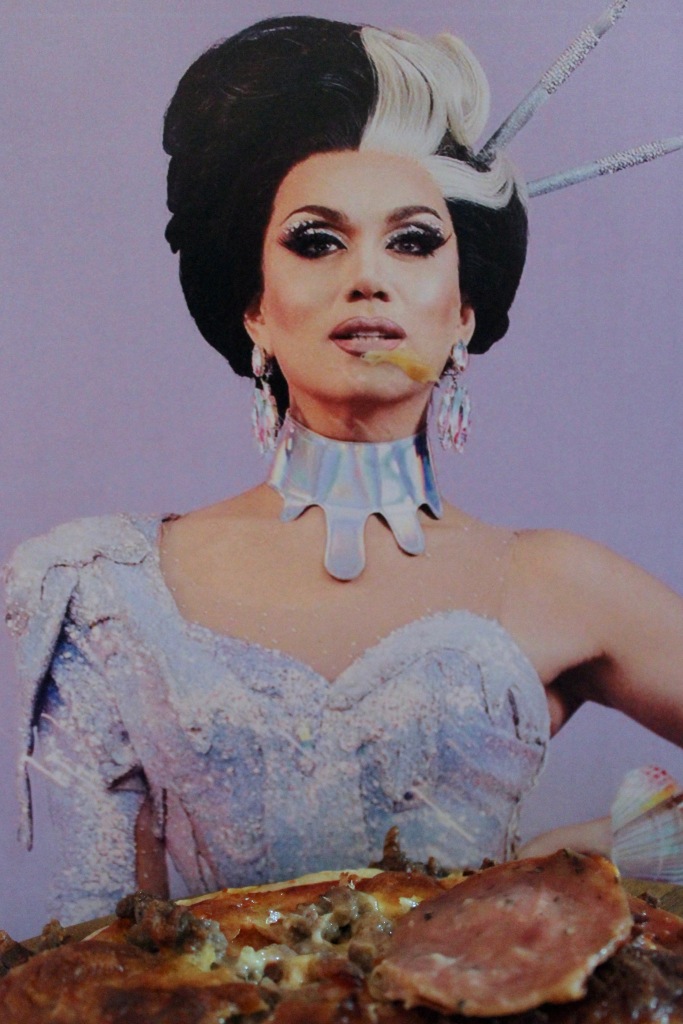 Maianila Luzon Pizza
Serves: 2 friends, 1 salty-yet-gagged and the other sad.

Smear passata over the prepared bases, sprinkle of the herbs, salami, cooked sausage, pancetta and a lug of chilli oil before topping – but we’re all bottoms! – generously, with mozzarella.

Devour immediately, hoping not to burn our mouth with some scalding cheese. Unless you want to feel something in this post-Manila world.