Previously on Survivor New Zealand, Shay and Tom buried the hatchet before Shay quickly unburied it, played dirty and tried to get him. They then all got dirty in a very sensual, muddy challenge which led to Tom winning over Barb whilst sharing Avi’s reward before returning to watch Shannon permanently eliminate herself from redemption.

Jak and Mike returned to redemption island, shocked to still be in the game on no man’s land. They then threw some shade at Shannon and were generally a bit obnoxious. Meanwhile back in the actual game, the tribe were feeling bad for Shannon’s loss and were being nice about the boy’s skills … though they all admitted to not caring for either of their returns.

Oh and Tom has decided Shay needs to go as Shannon has already promised to vote for her if she makes it to final tribal. I honestly can’t keep up with those two.

Nate and Shay took a leaf out of Barb’s book and discussed strategy and the threat Tom and Avi’s relationship poses – particularly given the potential returnees – all whilst reclining. Avi broke up the plotting and tried to reaffirm his alliance with Shay but did admit that Tom is having doubts her.

Shay then did the rounds, sidling up to Barb and her nemesis Tom to see where their heads were at and try and place a target on anyone but her. Less than a minute later, Tom floated getting rid of Shay with Nate and Avi, which the latter was not onboard with at all. Though he really had no option given no one trusts her, nor wants her around.

Nate then got word that Shay spoke about him being homesick and decided she was hoping people would boot him for that, despite the fact we all know that he’d go to redemption … and then the jury and could not possibly go home before the end of the game anyway. So yeah, I’m not actually buying that it’s a nefarious plot.

Wanting to get in on the action Matt returned for the next immunity challenge, involving beams, poles and balls, which is right up my alley. Despite starting strong and throwing the kitchen sink at it, Avi was first out of the challenge. Shay and Tom miraculously survived the second round of the challenge before Nate and Shay quickly dropped out when moving to the last section, followed by Barb, handed Tom his fourth immunity in a row, firmly painting a target on his back.

Back at camp the tribe were chatting about the challenge before out of nowhere, Avi took off running down the beach for no reason. He returned later and downplayed his minor breakdown before Tom pulled him aside to continue trying to turn him against Shay. Meanwhile Nate talked about getting rid of Avi given his likeability and the fact that anyone would beat Shay.

Avi continued to try and save Shay but TBH, it seemed more like lip service given the fact he didn’t really talk to anyone else about saving her. Nate floated an Avi blindside with Barb and while she seemed open to the idea, was ultimately non-committal. Which she confirmed by running straight back to Avi.

Meanwhile on redemption, Jak continued to tell unfunny jokes while he and Mike speculated who would be joining them that night.

Back at camp Nate and Avi went for a walk to where Nate quickly covered his tracks, telling Avi that he tested Barb’s loyalty for him. While Avi didn’t buy it at all, it was a nice try. Barb filled Tom in on what was going down, which made Tom annoyed by Nate. Tom then quickly tried to convince Avi that getting rid of Shay was still the best idea before heading off to tribal.

At tribal, Matt made quick work of making Nate cry by reminding him about the game. He then asked Avi about flipping and set him up for a massive case of the guilts. Avi said he felt it was important not to turn on your own, before Nate pointing out they’ve already had to do that in the game and Shay mentioned that she has a clear conscience and isn’t responsible for sending anyone to the jury … and reconfirmed how much she trusts Avi.

But it turns out she shouldn’t as Avi joined the rest of the tribe to vote her out of the game, again. While she was clearly bummed, she told her tribemates there were no hard feelings … until she got to redemption island that is, where she joined Jak and Mike to talk smack about Avi. Who Mike is still referring to as RV.

The next day at camp Avi continued to go full Blanche Dubois, having dreams about abandonment whilst realising he is now taking after the villainous Shannon … who is only a villain to herself and a passive aggressive Mike. At the other end of the spectrum, Tom was loving life with Shay out of the game and Barb Marley – who is now the last surviving female and really wants to win an immunity – appearing thrice daily.

Avi then started to foreshadow his downfall talking about how shocked and betrayed he would feel to be voted out next, which is how Shay felt when he flipped on her last night.

Back on redemption Shay explained that despite him flipping on her last night, she was working Jak and Mike overtime to help save Avi if they return by painting him as a non-threat.

After a brief interlude of Tom and Avi discussing how to play Mike if/when he returns, Matt returned to the screen for a paired off reward challenge for nuts. NUTS. I mean, I love we some nut but damn, on day 33 I’d want a fucking steak. Anyway, there was some kind of noughts and crosses style game for an island pick and mix, which Avi and Nate quickly took out thanks to an early mistake from Tom. But again, it was just for nuts … so who really cares.

Thankfully for Avi, it meant they were able to take their full sacks of nuts to a secluded section of the beach to bond and see where things go. Sadly Avi wasn’t able to lock in Nate’s trust or talk any strategy, so instead he reclined and tried to win him over with his masculine wiles.

Upon returning to camp, the final four (now) joined together on the shore to watch the sunrise and start black-market crab racing. After her crab turned out to be a rock, Barb reaffirmed her commitment to giving up on the game to focus on getting Avi and Tom to the final three … when she is by far the best remaining winner.

Talk once again turned to redemption island and the potential returnees, with Barb coaching Avi on how to win the game and the best way forwards depending on who comes back. Avi then joined Tom who made it obvious he was far more deserving of taking out the victory, given he actually seems to understand the game.

Finally we got a reprieve from all the talk, with the redemption island dwellers destroying the place on their way out to the battle … expecting it to be the last, which it clearly is not. Oh my, the fucking lols. Before we get to see their hilarious reactions when they realise they have to return to their mess, Shay, Mike and Jak competed in the Crystal Cox memorial challenge where they have to keep to poles balanced between the back of their hands and a beam.

Despite going better than stripped Olympic medalist Crystal Cox, Shay wasn’t able to outlast the boys and found herself out of the game, for realsies. While the boys were more heartbroken to discover they’d be going back to their destroyed camp and not returning to the game, yet.

While I had to explain to Shay that she wouldn’t be able to call her husband and smash any brownies after being eliminated, she was ok with the booby prize – my Shayonnaise Swain. 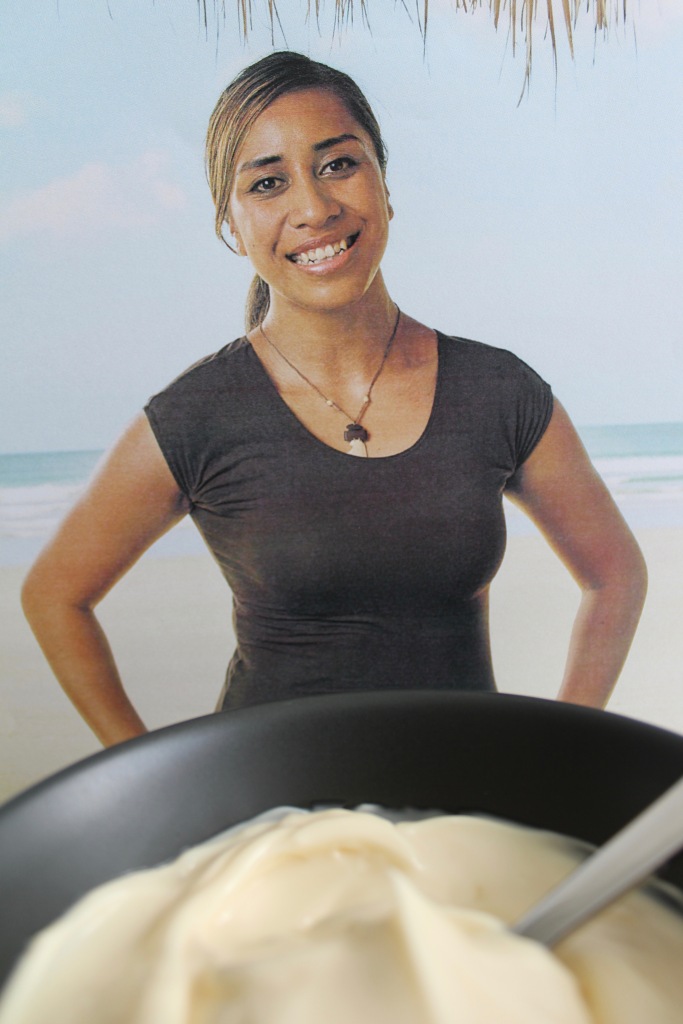 I mean, sure, mayo is a condiment and not a meal on its own. But when has that ever bothered me? Plus … it is pretty delicious, so shotting it isn’t that far outside the realm of possibility.

Method
Combine everything but the oil in a small bowl and whisk to combine.

Either whisking by hand, using a stick blender or the whisk attachment of a stand mixer – the latter being my preference – constantly whisk the mixture, while slowing adding the oil, allowing it to come together before adding more oil. Continue whisk on medium until the mayo has come together and it thick and glorious.

Cover and chill for a few hours before devouring … within two days. I feel it is too icky to keep it any longer.