Previously on Survivor New Zealand, Matt’s hold on phower of Phsan continued to grow – or so he thought – painting the target on Tess and keeping his newly found joint-idol with Lisa a secret from school-chum slash ally Dave. That was all Lisa needed to sway Dave’s loyalty to her side, outing Matt’s secret and trying to convince Dave to join her to get him out. While Matt convinced Adam to turn on his ally Tess and get her out, Lisa proved the most persuasive and got Dave and Tara to join her in knocking Matt out in a Cirie Fields patented 3-2-1 vote.

Back at camp Lisa was relieved that the tricky vote turned out in her favour, albeit a little guilty due to her friendship with Matt. On the flipside, Tess was shocked to find herself back at camp since she was sure that it was her that was going. Lisa explained why she flipped the vote on Matt to the rest of the tribe in an attempt to diminish the growing target on her back, which was thankfully overshadowed by the implosion of the Adam-Tess alliance after Adam confessed to voting against her at tribal council. Which she was well pissed about.

Things hadn’t really calmed down the next day, though Adam’s attentions had moved firmly back to Lisa and her rapidly expanding threat level. He was questioning every interaction they had ever had, was concerned about the fact she wanted to each some chicken and generally conflicting pieces of logic. Thank f- he is still a zaddy with those locks. Tess was still sulking about Adam’s slight, giving him a combination of side-eye and silence. Dave being the kind guy that he is, joined her by the shore and calmly listened to her rant about someone else’s blindside and tried to emphasise the difference between the game and real-life. Which was mainly just an attempt at reassuring himself that blindside his friend wasn’t a jerk move that will ultimately screw him over.

Spoiler alert: it wasn’t and you’re screwed no matter what if you don’t get Lisa out, respectively.

Meanwhile Lisa was trying to do some damage control, checking in with Adam to see that he is healthy … as a way to gauge whether she could trust him again. Which again, she couldn’t, as he complained about her being a dragon, despite the fact she was just playing the game better than anyone else.

Before any of the simmering feuds could explode, Matty Chis returned for the reward challenge where the castaways would carry bags of dominoes across a balance beam. The first two to finish would move onto the finals where they would stack the dominoes to eventually knock a ball into a bucket of water. The winner earned themselves Thai massages and smoothies and to the final five it was well and truly, as OG Jeff would say, worth playing for. Dave and Tess made quick work of the first round before Tess schooled Dave in round two. As is oft the case, Matt gave her the opportunity to select someone to join her which she opted to share with recent enemy Adam. Much to his shock.

Adam decided that he needed to apologise before their relaxing massages, so pulled Tess aside and cleared the air. As awkward as it may have been for him. While the duo were renewing their friendship, Tara took the chance to seethe about not being chosen for the reward and tried to poison Lisa and Dave against her. Doubling down on the seething, Adam complained about Lisa’s gameplay and how she had made everything personal and that no one would vote for her because she is mean.

Adam, you’re making it hard to love you this episode.

While they continued to rage while getting pampered, they identified Dave as their only hope to get rid of Lisa and her hideous gameplay. Back at camp she ran the numbers with Tara, who admitted that she would be pissed if Lisa blindsided her without realising that she is a goat and no one is stupid enough to get rid of her. Lisa continued to do damage control and approached Dave to check how he was feeling after the blindside. They then locked in a final three deal with Tara, so hopefully it works out for her. Because I am stanning the hell out of Lisa.

Matty Chis returned for the classic immunity challenge – owned by Parvati and Ozzy – where everyone has to hold on tight to a long, thick, hard pole for as long as they can. Aka, my fave past time. Adam dropped out as soon as the challenge started, followed closely by Tara while Lisa and Dave struggled their way through. Lisa soon followed, breaking down in tears in the process. As you would expect, Dave’s struggles soon got the best of him as he slowly slid down that pole – yas queen – and handed Tess immunity.

Given her target had snatched immunity, Lisa got straight to scrambling when they returned back to camp. Thankfully for her, Tara was all in for getting rid of Adam. However Tess and Adam also got to work scrambling, hoping to convince Dave to join them in taking out Lisa … with a back-up plan of finding an idol and causing chaos for Lisa at tribal council. While Adam went idol hunting, Tess approached Dave about flipping over to their side and while it is definitely in his best interests, I just don’t see it happening. Ever. No matter how long he debates it. Dave then did his go to move, and approached the person he is potentially blindsiding to see whether he can trust them. Thankfully their pow-wow gave us the glorious scene of Tess asking Tara if she would consider voting with them, and her iconic point blank ‘no’ response.

At tribal council Matt quickly started throwing shade, questioning whether Tess would be capable of winning and checking if Lisa and Dave were struggling emotionally. Which lead to poor Dave breaking down at tribal council over booting Matt, making Eve and Matt well up from the jury box. Talk of Matt’s exit was the catalyst for Adam’s chaos, talking about him also being blindsided by the last tribal council and questioning Lisa about trust to avoid being, and I quote, another man-bun on the jury. Adam tried to make the blindside personal, saying Lisa taking out Matt while convincing him to vote Tess made a joke out of him. Adam then turned his performance into a plea, as he and Tess begged Dave and Tara to take out Lisa instead.

Despite the fact both Tara and Dave were looking salty about their alliance with Lisa – and Dave channeled Hannah in sitting at the voting booth for a ridiculously long time – they stayed loyal and joined Queen Lisa to take out my sassy zaddy Zadam. While he took his boot in his stride, I took him in my arms just in case he needed a hug to cheer him up. We then spent our time in the Jury Villa, laughing, catching-up – I was on the same season of The X Factor as him obviously, since I have the voice of an angel – and smashing … an Adam O’Brionion Cheeseburger or three. 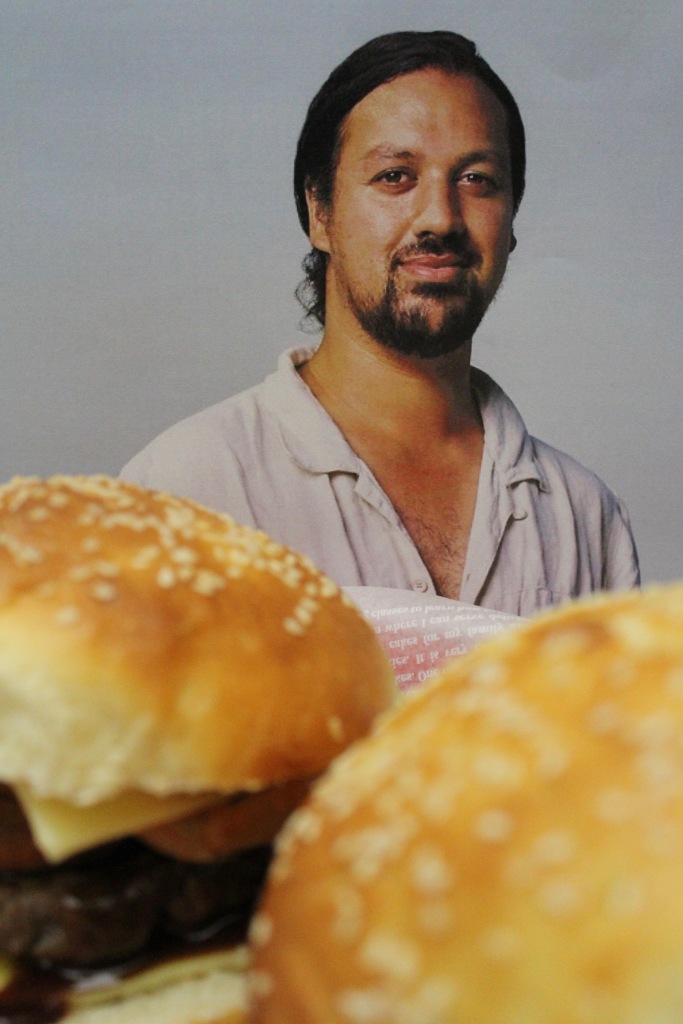 You know I love sticking meat in between some soft sweet buns, and let me tell you this burger does not disappoint. Crispy onions, sweet sweet barbecue sauce, creamy mayo and cheese? I’m in heaven.

Method
Place the mince in a bowl with a good whack of salt and pepper, and scrunch to combine. Form into four patties and place in the fridge to rest for half an hour.

Place a large pan over medium heat and brush with oil. Add the patties and cook for a couple of minutes each side, or until just cooked through. Remove from the heat to rest and place a slice of cheese on top of each to melt slightly.

Split the buns and toast, smear mayo on one side and barbecue sauce on the other. Top with the cheesy patty and onion rings, and devour immediately.