It’s always a relief when our escapades don’t wind up with a period of incarceration/sectioning.

After a particularly unfortunate incident involving Bob Harper, several pints of Ben and Jerry’s and hundreds of cable-ties, Ben and I were ordered to deal with our court-determined ‘issues’ through a yoga retreat. Through serendipity we landed in the care of Survivor royalty and all-round legend, Parvati Shallow. Parvati allowed us to express ourselves through a combination of relaxing yoga and scrappy beat-downs (she is also a boxer).

As our kindred spirit, Parvs visits each year for an early Christmas ‘do, where we debrief the most recent season of survivor and inevitably reach consensus that nothing will ever beat her outstanding gameplay in Survivor: Micronesia.

This year we decided to greet Parvati with a distinctly Australian take on Christmas dessert – the Parvlova Shallow. 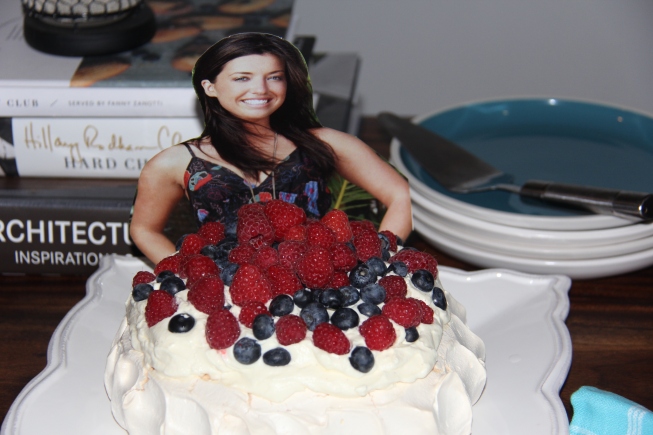 Just like Parvati herself, the Parvlova shallow is sweet and enticing with it’s fresh summer berries and pillowy meringue. Also somewhat like Parvati, shortly after consumption you will find yourself rolling around with an intense, cream-induced stomach ache, wondering – how can something so sweet and delightful be such a source of buns-kicking badness?

Parvati, this is our tribute to you.

Method
Preheat oven to 120 degrees celsius.
In a stand mixer, beat egg whites until soft peaks form. Gradually add sugar, one tablespoon at a time, until meringue is thick and glossy. Mix in sifted cornflour, vanilla and vinegar.
Using the base of a springform pan, trace around pan onto a sheet of non-stick baking paper. Place baking paper, circle side down, on a large baking tray. Spoon meringue mixture within the lines of the baking paper circle, smoothing to make a large disk approximately 10cm high.
Bake for 2 hours, or until set. Leave to cool in oven with door ajar.
To serve: Whip cream until soft peaks form. Cover top of pavlova with cream and berries. Serve immediately.