Previously on Survivor New Zealand, when Dave found his idol a couple of episodes back he quickly shared the intel with his school friend slash ally Matt. On the flipside, when Matt and Lisa found an idol last episode the both vowed not to tell anyone, not even Dave. The idol find and immunity win by Matt derailed Lisa’s plan to vote him out, leaving Eve to make her heartbroken exit from the game as the next biggest challenge threat.

Back at camp the tribe discovered that the storm during tribal council had broken their shelter, leaving everything drenched and everyone completely annoyed. Zadam hated everyone and bamboo, Dave was sick of not having any control in the game and Tess shone like a shining beacon of hope while trying to cheer them up. And now I’m back to being team Tess. The next day everyone was still feeling down because of the weather and how heartbroken Eve was when getting voted out. While Tara was proud of giving her friend a heads up before getting cut, Matt felt it made her even shadier and as such he felt she needed to go.

Well, that is until he went to the well with Adam and Tara and told them that Tess was the one that needed to go next as she was trying to get rid of him. This didn’t sit well with Adam who was sick of people coming and telling him who was going next the morning after a tribal council, particularly since they’re closely aligned. While Tara tried to stir some trouble between Adam and Tess, that made him want to get rid of Tara … despite admitting she is an easy person to beat in the end. Meanwhile on the other side of camp Lisa approached Dave to see how he was feeling after tribal and attempted to comfort him. Which seemed to work as he spoke about how he only trusts Matt and Lisa. Which is great for Lisa, except for the fact she needs someone to trust her more.

The tribe ventured deep into the jungle to meet Matty Chis for the first ever Survivor New Zealand auction, much to the delight of everyone. Particularly Matt, who wanted some food and an advantage. Though since he kicked off the bidding on a shit tonne of donuts, me thinks he will spend up before said advantage appears. Adam spent all his money on pizza before Matt spent $300 on beer, chips and nuts … and blew any shot at snatching an advantage. Tara snatched up bolognese and wine with all her cash, leaving Dave and Lisa the only ones waiting to snatch an advantage … wait, no, Lisa spent all her cash on a covered item. Which was tragically white rice … except for the fact she switched it for the second option which was a huge toasted sandwich, fries and soft drink. Dave then snatched an advantage for $300 and tried to pretend he was heartbroken before the auctioned closed with Tess buying a cake for everyone to share.

Back at camp Adam was furious about Dave’s obvious performance about not wanting an advantage, which would have been unfair had Dave not tried to lay his disappoint on very too thickly. While Tara and Matt were more sympathetic to Dave’s plight, them wondered what his advantage could possibly be before abruptly changing the conversation to taking out either Tess or Dave. While Matt was sick of working hard to keep Dave in the game, he continued to hustle and pointed out how well connected Tess is on the jury. Not to be outdone, Tess was starting to feel like everyone is against her and wasn’t sure who to trust.

Matt and Lisa caught up in the jungle with Lisa pretending that she wasn’t still pushing to take him out and use said move to prove her case to the jury. They continued to discuss their options to get to the end before Matt admitted that he wanted to go to the end with Lisa and Adam, giving her an in to out him. Maybe.

Before we could find out Kiwi Jeff returned for the next immunity challenge where everyone was required to balance dishes on the end of said pole. You know that advantage Dave purchased? Well it bought him the ability to sit out the first for dishes on the challenge, which is huge TBH. Tess dropped on the twelfth dish followed closely by Lisa. Adam tragically dropped on the fifteenth dish immediately followed by Matt and Tara, handing Dave a long overdue victory.

*coughs* thanks to an advantage *coughs*

Back at camp everyone but Tess disappeared to lock in the vote against her, while poor Tess tried desperately to befriend a lizard. Lisa played the role of dutiful number in front of Matt, joking that at least everyone can have normally conversations it is an easy vote. Matt then caught up with Adam to make sure he is ok with getting rid of Tess, which he was … despite preferring Tara to be the next to go. Meanwhile Lisa finally had her chance to talk to Dave and convince him to join her in taking out Matt. She then lay all her cards on the table and admitted that she and Matt found an idol, making Dave feel extremely betrayed and in that moment the breakneck speed of the episode started to make sense. With Dave seething, Lisa brought out the Cirie Fields patented 3-2-1 split vote, suggesting she, Dave and Tara vote for Matt, leave Matt and Adam to vote Tess and Tess can vote for whoever she damn well wants. While Dave wasn’t sure whether he could betray his friend, he appreciated how honest Lisa was with him.

Dave being Dave, he told Lisa he would talk to Matt and see whether he would come clean and if he wasn’t honest, he would join her. Making her and everyone watching extremely nervous about it falling apart. Lisa quickly found Tara and looped her in while Dave and Matt discussed the plan to vote Tess before Dave clumsily tried to give him the opportunity to admit to finding an idol. Which he eventually did admit to and Dave begrudgingly told him that if he felt nervous, he should play his idol tonight. Stupid. Fucking stupid.

Lisa and Dave approached Tess to see what her thoughts were, with Tess suggesting Tara as a possible option. Adam and Tess went off to discuss options, Matt told Lisa he felt like he should play his idol while Lisa tried to insinuate he will need it next week and poor Dave continued to seethe about Matt’s betrayal, despite essentially ruining the plan because he is stupid and can’t separate life from the game. Though his tears did soften my stance, the move was idiotic.

At tribal council Tess shared her shock about how far everyone has come, Tara was sad about her at the challenge, Matt admitted to being nervous about the upcoming vote and Dave spoke about being nervous about what he says at tribal council. Dave gave Matt stankface as he spoke about wanting to play his own game, Adam said he’d be shocked if anyone had an idol and Tess joined the chorus of people nervous about their chances at surviving tribal. With that everyone went off to vote and despite the anxious look on his face Matt decided not to play his idol, no doubt convinced Tess was going due to Adam’s sobbing voting confessional. Despite Dave’s stupidity Lisa’s 3-2-1 split to come to fruition and Matt found himself booted from the game as Lisa giddily watched on.

While I found it ridiculous that he didn’t play his idol – and more importantly was cast opposite a school friend – I couldn’t bring myself to rub salt in the wounds because he is such an absolutely sweetheart. And … he gave me nudity in episode two and I am always grateful for that! As such, I kept my mouth shut, congratulated him on a game well played and served him up a big ol’ Matt Hamhock Soup. 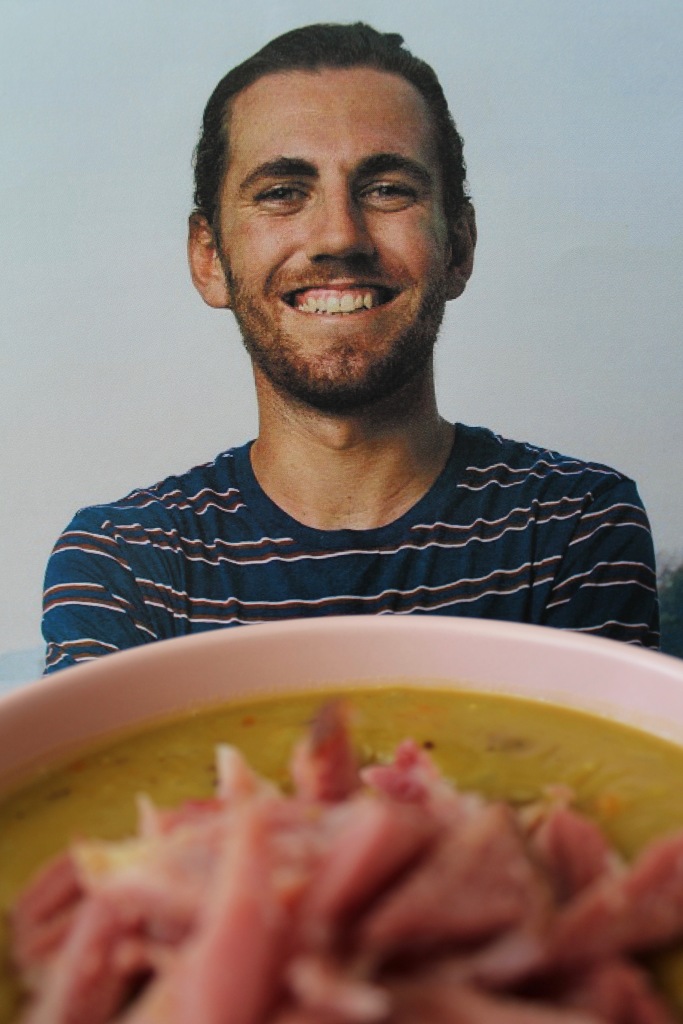 Like Eve’s recipe before him, I had never really been a fan of hamhock soup on account of the huge bone sticking out of my meal as a child. I would sit there, sadly slurping around wondering whether my mother confused me for the family pet, rather than the child. Thankfully I have worked through said trauma and can appreciate the hammy slop for all its goodness.

Slop. Doesn’t that make you want to enjoy it?! 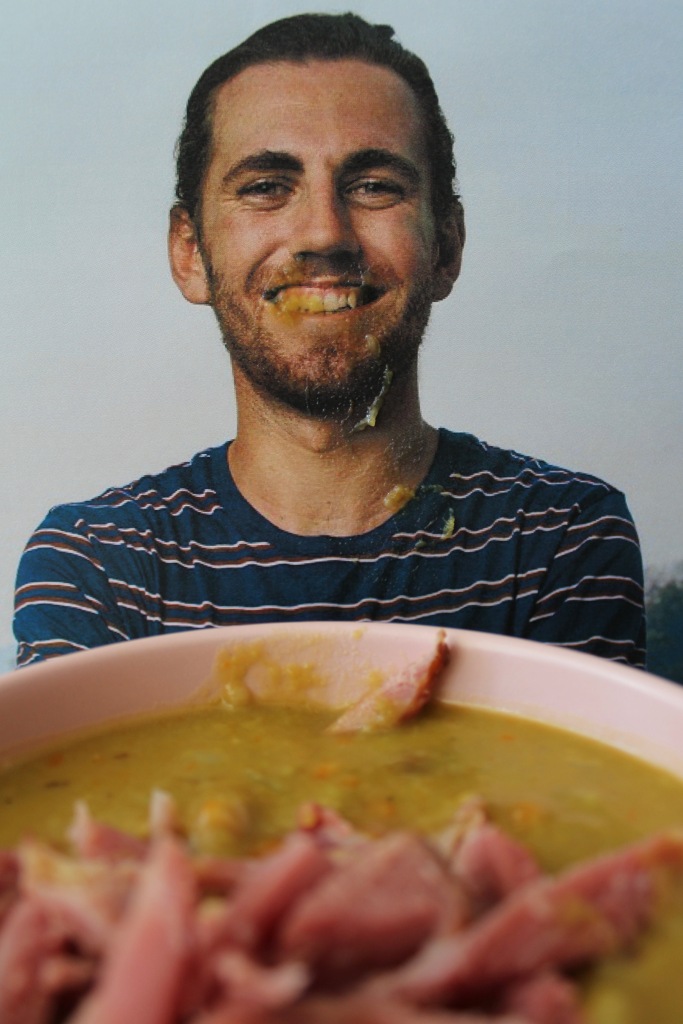 Method
Heat a lug of olive oil in a stockpot and cook the onion, celery and carrots for a couple of minutes. Add the split peas and hock with a good whack of salt and pepper, gently flipping the hock to try and brown. You won’t be successful, but I’m convinced the process enhances the flavour.Add the stock and bring to the boil. Reduce heat to low and simmer, stirring occasionally for an hour, or until thickened.

Remove from the heat and allow the hock to rest on a chopping board for fifteen minutes, or until cooled. Pull the meat from the bone and shred.

Serve immediately, generously topped with the ham and a whack of pepper. Then devour.