Previously on Australian Survivor the Champions and Contenders were no more as the tribes merged, reuniting Shonella and Sharn and Lydia with their fellow Champions. Though not that Mat cared, given they allied with Benji and Robbie in his absence. Things only got worse for the duo as Shane pulled out of the immunity challenge and used that time to rally the troops against blindsiding Lydia. Which she executed to perfection, with Benji and Robbie once again left in the dark.

We returned to Koro Savu the next day where Shonee was continuing her helpful kick, starting fire and keeping Fenella like the queen that she is. Though given she is just grateful to have Fenella back – aka the only person she likes – she is willing to look after her. They then laughed about their ability to float through the game, find cracks and hot damn I want to be their bestie.

The clothed duo of Benji and Robbie were sulking by the shore, worried about what being left out on the Lydia vote means for them. Benji continued his streak of being wrong, identifying Mat as the one in charge and vowing to get his revenge. Completely unaware that Queen Shane is the icon in charge. To Mat’s credit, he knew the boys were pissed and approached them to tell them that Shane spearheaded the move and he had no other option. However once again, Benji chose to be wrong and decided it was a complete lie. Continuing his delusions of grandeur, Benji decided to cause chaos and paint a Survivor masterpiece. He kicked that off by reminding us that Monika is on the island, approaching her about forming an alliance over pawpaws. Which is a shitty omen, given pawpaws are foul.

Sharn too was still smarting about the outcome of the previous tribal council. Knowing she needed to lock in some backup options, she connected with Benji to see whether they were still good. Obviously they still were because Sharn is another dominant queen and is friendly with everyone. Meanwhile Mat and Steve were overcome with some paranoia by the shore, with zaddy Steve concerned about everyone turning on them now that Lydia is gone. Which is totally what is happening in the next few tribals, right? They checked in with Sharn who once again assured them everything was ok and that they could take out Robbie or Benji next.

Robbie and Fenella interrupted the plotting by returning to camp with an ominous note telling them to select one person to go up the path and make a decision for the tribe. Given everyone loves and trusts Sharn, they chose her and she was faced with the decision to take a huge bag or veggies … or a smaller one, an advantage at the next immunity challenge. While she debated about doing the right thing, she did the right thing for her game and selected the advantage, meaning she would only have to hold half the weight required at the challenge.

She returned to camp and told them she chose veggies for the tribe over a plate of chocolate biscuits for herself and one other person. While everyone was quick to buy her story, Sam called shade and needled her in the hope that she’d break. He tried badgering, taking her on an old fashioned guilt trip and hot damn, Sharn is a queen.

My boy Jonathan made his triumphant return to the screen for this week’s immunity challenge where everyone would be required to hold a disc like the prayer-moji with a giant sack of weights suspended from the bottom with the last sack hanging, winning. Monika quickly dropped out as Shonella compulsively readjusted to stay in the challenge, tragically to no avail for Shonee who dropped and was followed quickly by Shane and Fenella. Sam became the first male to drop, followed quickly by Steve. After fifteen minutes Brian dropped, followed by Benji at twenty minutes, leaving Mat, Robbie and Sharn to fight it out. Everyone was struggling and hot damn, how did I only just find out Mat is missing the top of two of his fingers?! Anyway Robbie dropped, followed by Mat who offered to give Sharn immunity despite the fact that she was owning the challenge anyway – having half the allocated weight may have had something to do with that – and has now had it back-to-back.

Back at camp Benji was hoping to make his way back on top with Robbie – which I would obviously watch – while Mat was confident about the tribe banding together to get rid of Robbie, despite the fact that is another meatshield heading out of his game. Robbie approached Mat to see if anyone was throwing his name out, with Mat admitting that he was planning to vote him out. He then ran his mouth further, telling him it would be a split vote and as such, an idol won’t help. Benji decided to join the fray, aggressively checking whether they’d split the vote on him. He then pulled a tearful Robbie aside and vowed to do whatever he can to protect him.

With that, Benji approached Sharn to float the idea of taking out Mat first as he’s a far bigger threat and Robbie really has nothing going on. He then checked in with Shonee to see whether she and Fenella would be open to voting out Mat instead, as taking out the leader would cause the Champions to splinter and potentially give them other options. Shonella regrouped to talk options, unsure whether keeping Robbie around as a shield would be beneficial and whether they could hijack the split vote to get their own way. Robbie and Benji continued their attack, approaching Sam who was feeling well and truly left out. Given his vulnerable state, he was open to the plan and speculated whether now was the right time to make a move against Mat. Speaking of whom, Mat approached Benji as they were planning to head to tribal council to confirm that they would be voting for Robbie and that they would be interested in keeping Benji around if he joined them.

At tribal council Jonathan reminded everyone that while someone will be voted out tonight, they’d get the honour of becoming the King or Queen of the jury which is pretty much the next best thing. Benji agreed it made everything even more complex moving forward while Brian felt confident that he was making bonds to keep him in the game, and I assume, get some votes at the end. Sam spoke about the people on the bottom of alliances needing to flip eventually, while Robbie smugly smiled to himself. Mat tried to reiterate the importance of loyalty … before Robbie went in, pointing out how big of a threat Mat is and that he and Benji are free and ready to make a move. Monika agreed that people on the bottom would need to flip, but only if they could see the benefit of it for their game. Mat spoke about threats, Benji struggled to articulate what the vote meant to him, eventually spluttering out that he hopes to help people along as far as he can, smartly pretending he doesn’t think he can win. Robbie reiterated that he and his allies are willing numbers, if people want to make a move.

With that, Jonathan sent the tribe off to vote and he tragically discovered that he had no allies in the game, as the tribe banded together to take him out and make him the King of the Jury. Which I hope sees as increase in his nudity. While poor Robbie was gutted to find himself checking into the Jury Villa, my aforementioned and oft referenced too thirst kept me from pointing out that he only has himself to blame after sharing too much information and being hella obviously while painting a target on his back. Instead, I giggled like a school girl and madly tried to shake our beer cans so they’d spray all over us while we sat down for our a Clubbie Sandwicki or two. 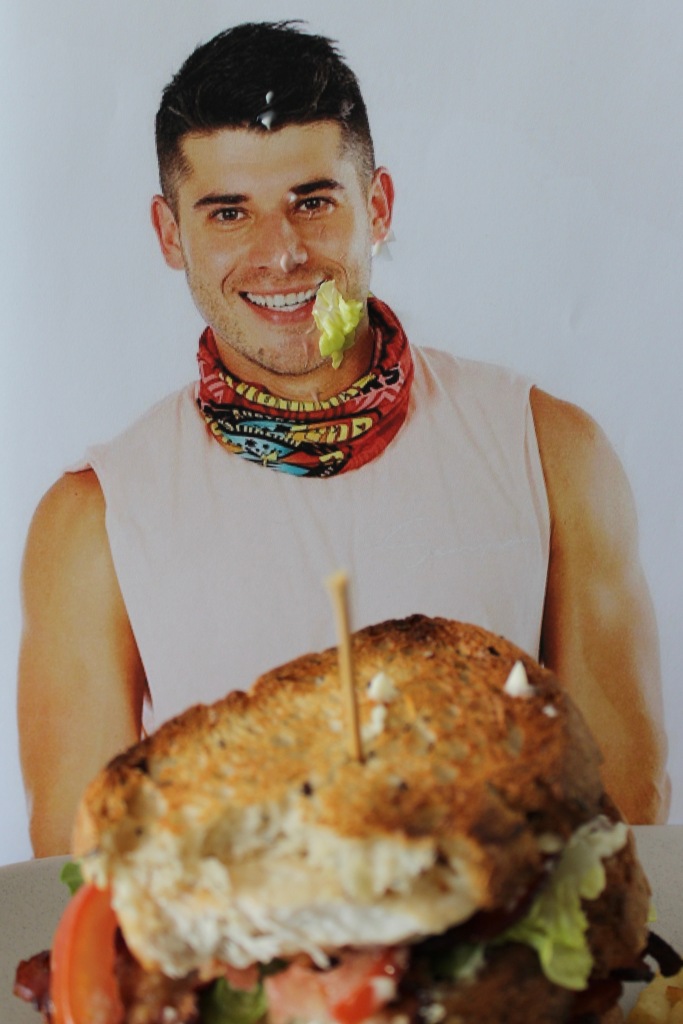 Method
Heat a lug of olive oil over medium heat and cook the chicken for 5 minutes each side, or until golden and cooked through. Remove from heat and keep warm while you fry the bacon in the same pan until crisp.

Serve with fries and devour.