Another day of our Oscar Gold celebrations, another catch-up with a Best OG Screenplay winner. But I mean, my girl Sofia is Hollywood royalty and really should have some Best Director and Best Picture wins under her belt … so she is pretty much the perfect person to run most of the outstanding odds.

As you know, I am a dear, close personal friend of the Coppola-Schwartzman-Cage Dynasty and as such have known Sof since she was knee high to a pig’s eye!

I was even the one to suggest to Fran-Ford to cast her in The Godfather Part III, which in retrospect I should apologise to all involved … but that is beside the point, you know.

Thankfully Sof was quick to bounce back from my (horrific) career advice and quickly turned herself into the auteur we know now. I mean, between The Virgin Suicides, Lost in Translation and Marie Antoinette, she creates beautiful languid films of substance, lead by strong women.

Basically, I love her. So damn much. And that isn’t just because she made a movie about my crime spree in Bev Hills back in the day.

I’m pretty sure I mentioned being part of The Bling Ring before, right?

That being said, my girl has been hella busy with The Beguiled so we haven’t been able to connect recently so it was such a treat to get together and discuss the Oscars … which we are hopeful she will have a strong showing at next year.

Anywho, I know you came for the odds so let’s get to them first. Sof agrees that the Screenplay gongs will go to Moonlight and Manchester by the Sea … because La La Land’s best writing came in the form of its music which will take Best Score and Original Song along with Cinematography, Editing, Sound Editing, Sound Mixing, Production Design, Director and Actress on its way to Best Picture.

Oh and obviously if we are wrong about the technical categories … it is fake news, ok? Because let’s be honest Arrival will probably take most of those. Maybe it isn’t fake news if I hedge my bets?

Ok – I’m hella confused, so I’m off to prep for tomorrow’s big guest, so why not head to the kitchen and whip up a delicious Sofia Coppo’boyla while you wait. 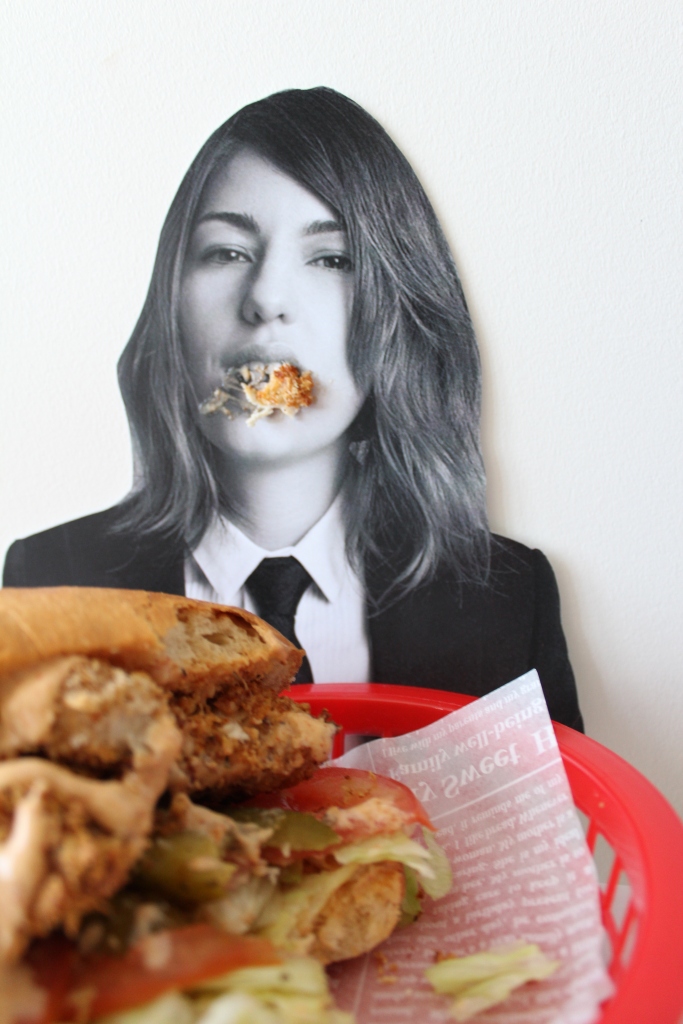 Method
Preheat the oven to 180°C and cut up the chicken into bite sized pieces.

Combine the breadcrumbs with a good whack of salt and pepper and the tablespoon of cajun seasoning. Dip the chicken into the egg and toss through the spiced breadcrumbs to thoroughly coat. Transfer to a lined baking sheet and cook for twenty minutes, or until golden and cooked through.

While the chicken is baking, combine the mayonnaise, mustard, hot sauce, pickle juice, paprika, horseradish, garlic cloves and remaining cajun seasoning in a jug. Add salt and pepper to taste and leave to chill in the fridge and let the flavours mature.

When the chicken is done, brush the inside of the bread with some butter or oil and place in the oven to crisp for a couple of minutes.

Remove the rolls, smear generously with sauce, top with lettuce, tomato, pickles, chicken and another drizzle of sauce.

One thought on “Sofia Coppo’boyla”