I tell you, Charo is an absolute miracle worker on the soul!

After a tumultuous month with Annelie engaged in a legal battle with Brandi Glanville after giving her the information which lead to Fish-Cooch-gate, foiling Kelly Rutherford’s attempts to gain back custody of her children and blocking Bryan Adam’s next album from seeing the light of day, and where I was involved in a non-deliberate-or-scam-related hit and run (the car hit, I ran … to a bar), we have been feeling a bit down, despondent and in need of a lift. Charo, petite as she may be, had us soaring higher than her flamenco riffs at the end of our catch-up.

Charo is a rarity amongst our friendships, in that we have never once been engaged in a fight, legal battle or had an ill word to say of one another in our five decade friendship. Some would argue that the mutual secrets of our actual ages make us scared to cross each other, but I would argue that her Spanish charm is too infectious. I mean, come on, she’s Charo!

Even during our time working on The Love Boat, where Annelie and I were heavily addicted to crack cocaine and invented the drug Bath Salts in the Captain’s Suite with Shirley Jones, Charo embraced us with warmth and tried to help us achieve our best.

Charo walked into Annelie’s place and could tell we were both down (Bryan’s album still had a release date and I realised I forgot to get the details of the man who legitimately ran me down), immediately breaking into an epic four and a half hour flamenco guitar solo about hope, despair and perseverance which turned our frowns upside down.

The only way to repay our dear friend, mentor and role-model and celebrate her multiple birthdays, was to whip up the biggest batch of Charros possible, while we plotted ways that Ben could win back JVDB’s love after he ruined a Beek Jeans event three years ago.

While Charros are good with a nice thick, chilli chocolate sauce our personal favourite accompaniment is Dulce de Nick Lachey. It is thick, sweet and makes you want to smack your hands/face in it until Charo can teach you the sign language for it / work you out of your funk. 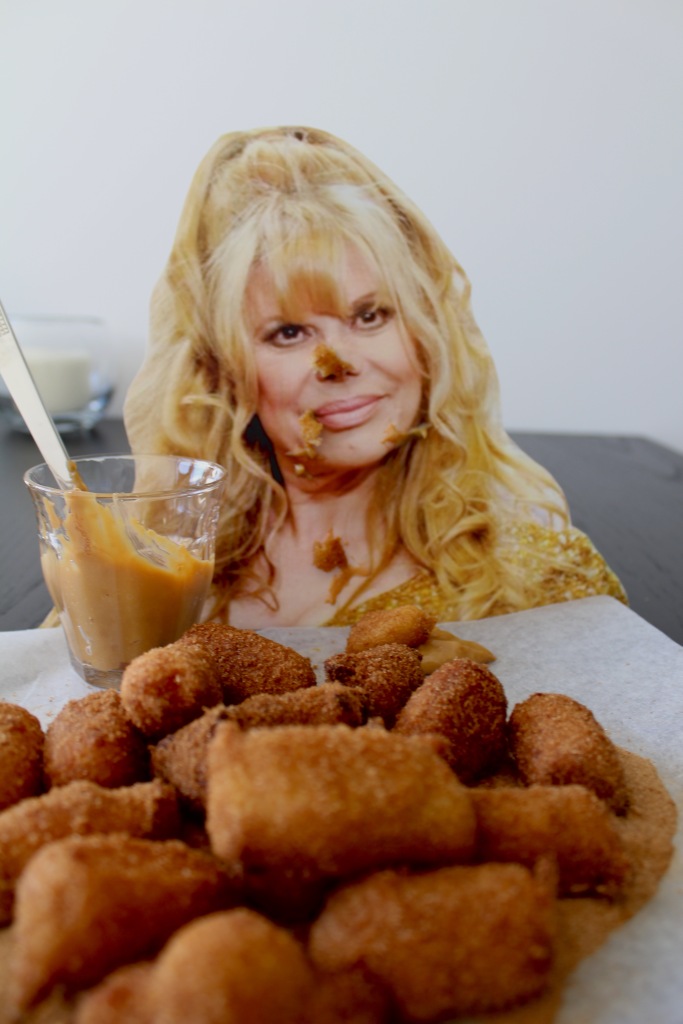 Method
Mix the sugar and cinnamon in a wide, shallow dish and place aside (this is for the coatin’).

In a large, heatproof bowl combine the flour and the baking powder, and then beat in the olive oil and boiled water. Keep mixing until the dough comes together, it will be warm and sticking so don’t let that scare you. Leave the dough to rest for 10 minutes, while you heat the oil over low/medium heat in a medium saucepan (the oil should come up a third of the way, remember I am pretty scared of deep fryin’).

When the oil appears hot enough, toss in a cube of bread and see if it sizzles and browns. If it browns in about 30 seconds, you’re good to go. Keep watch on the hot oil pan at all times, you never know when it can go nuts.

Load up a piping bag with a large star shaped nozzle (if you don’t have a star nozzle, like me, a plain one won’t matter. They will just look like strange little nuggets that taste delicious) and fill it with the dough. Squeeze lengths, about 6-8cm long, of dough into the hot oil, snipping them off with a pair of scissors as you go. You could do them long, but that would require some serious deep-fryin’ which I am just not emotionally ready to commit to. Cook about 3 or 4 at a time. Once they are browned, remove to paper towels with a slotted spoon and then place on a lined baking sheet. While you work through cooking all the churros, keep them in the oven to retain their heat.

Once all done, keep in the warm oven for about 10 minutes to help them finish cooking through before coating in the cinnamon sugar and serving with a generous amount of Dulce de Nick Lachey, preferably on Nick Lachey.

This may be all about Charo, but she isn’t the only one bringing the spice, no?