Previously on Survivor New Zealand, Shay flipped on her alliance for the second time, at her second tribal, sending a well pissed Tony to redemption island. The next day those not in purgatory competed in their first reward challenge, where Mogoton continued their losing streak. Meanwhile on redemption, Tony made quick work of the duel sending my queen Hannah out of the game.

We opened up back at Mogoton where Sala and Lou spoke about what went down at the duel and his threats for Shay’s blood, scaring the shit out of Shay. Given that he was out for blood though, I get it. Meanwhile Georgia and Shannon decided it was best to keep the juicy intel from the rest of the Hermosa helping Shannon in her quest to be my new queen.

Oh and Tony was still calling for blood on redemption … while sharpening a knife. I thought he was sweet, but that’s some scary shit.

Hermosa sat down to the first of their two meals for the day, confusing Nate and Barb who couldn’t understand why they’d bother eating twice a day for four days when they’re barely a week into a 40 day competition. Sadly though, they’re screwed if they ever lose a challenge.

Back at Mogoton Izzy got to work whipping up a sand cake in honour of Sala’s daughter’s birthday. I was going to throw some serious shade about the cake until seeing how it touched Sala … which in turn touched me. You got lucky, Izzy!

We returned to Hermosa where Lee’s hair was looking fucking stunning. THEN he decided to go fishing in short shorts. Ladies and gentleman, I think we have a winner of my heart! There was then a lot of poo talk which made me and my nieces and nephews thrilled – if they watched – though it ended up backfiring on Jak, with Barb sick of his attempted humour.

Over at Mogoton Lou and Avi went for a walk to talk strategy, planning to keep stringing Tom along to pull in the numbers with Sala, begging the question how does Shay flip if she isn’t a part of the majority?

Matty Boy – is that a nickname? More importantly, is he worthy of one – arrived to lord of the immunity challenge where tribe members had to square off against someone from the other tribe by holding themselves up between two walls on small footholds.

Lee’s hair continued to look glorious, though I also started to realise that Tom is also pretty banging. Did I mention no one dropped out on the first two footholds? Because they didn’t. Avi was the first to drop not long after transitioning to the thinnest foothold, followed by Lee – with a hairflick, swoon. Izzy hit the deck not long after, which is the best thing to say with a kiwi accent. After a lengthy struggle Tom gave out leaving poor Lou to battle it out for her tribe solo. Despite some excitement with Shannon falling out and it starting to rain – which made Mike also look banging, the water glistening over his flexing muscles …

Oh and then poor Lou dropped, handing Hermosa immunity and giving Shay the opportunity to make a new alliance that she can flip on!

Back at camp, Hermosa were loving themselves sick, sitting under their tarp and gloating about their continuing winning streak. Thankfully nature threw Mogoton a bone and the rain stopped, though not after destroying poor Shay’s scriptures.

Lou, Izzy and Shay broke away from the boys to discuss the upcoming tribal where Shay continued to push for Tom, which is something neither Izzy or Lou seem keen on. Avi and Sala got together and vowed to vote Izzy, Tom dropped by and wasn’t keen to boot Izzy, instead wanting to get rid of Shay. Avi then went to talk to Lou and Shay, where the latter verbalised wanting to boot Tom putting Avi in a difficult position. Shay and Avi then went for a walk where Avi worked overtime to save Tom, which Shay still isn’t buying into.

Avi delivered the news to Tom, who was disappointed that it was coming down to him and Izzy, though not disappointed enough to get her, Avi and Lou to get rid of Shay. As they prepared for their date with Matt, Izzy gave a last ditch plea to Avi after he announced that they would be voting her out. After Izzy was clearly upset by Avi’s news, Tom got to work on the obvious solution and went to the girls to join he and Avi to boot Shay, completing the circle of confusion before heading off to tribal.

At tribal Shay and Avi spoke about being disappointed by their losses, though not defeated. Tom then gave a great read on the situation over at Hermosa, low-key proving he is an asset and a huge threat going into the merge. Lou outlined that she trusted everyone while Izzy announced that she was pretty confident that she would be getting the boot.

Sadly for her she was correct, sending her to redemption island to stew in her rage with Tony. Thankfully Tony welcomed her with open arms, not shocking Tony since Shay is obviously the wicked witch of the west. That being said, I assume he was just happy to have some company given his monologue after she arrived.

Back at camp Mogoton continued to feel sorry for themselves, except for Tom who was only saved by Shay’s last minute flipping. I KID YOU NOT!

The next day Hermosa were still riding on the high of their victories, already losing the ability to count the number of days despite eating two meals a day. Jak and Mike pulled Shannon, Lee and Georgia aside to discuss throwing the next immunity challenge to get rid of Barb or Nate, breaking my heart in the process. Thankfully though Shannon continued to be the likeable voice of reason, with her countering the fact that while throwing a challenge is a bad idea, Nate will flip on them in a heartbeat and it sadly makes sense. Barb however noticed that Shannon had dropped she and Nate, leaving the olds desperate to fight for the next immunity.

Over at Mogoton, Tom and Avi ran through their option to call out Matt and get him to rotate the sit-outs on Hermosa to give them a shot. Obviously that lead into the next reward challenge where Hermosa were shocked to discover that Izzy was the one voted out at the last tribal.

The challenge is one of my faves for smutty puns, where one member of each tribe has to pitch their balls for the rest of their tribe to catch. Balls, pitching and catching – what more could a guy ask for? Sala and Shay got Mogoton out to an early lead, taking three balls before Hermosa even took one … surprisingly caught by Jak. Sala got another, Lee and his torn apart shorts got in on the action before Sala proved the most skilled with balls, snagging Mogoton with their first challenge victory of the season.

Back at camp Hermosa weren’t taking the end of their losing streak very well, with Mike quick to point out that Nate was absolutely useless in the challenge. Mike and Georgia discussed how best to ration their food, vowing to cut down tomorrow like literally every person on a diet.

It was a different story over at Mogoton where everyone looked happy for the first time in nine days. To add insult to Hermosa’s injuries, Georgia’s fears were confirmed with Mogoton gloating about how much food they have remaining … without even taking into account the huge fishing kit they just won in the reward challenge. That night Lou announced that she had sliced her foot on a rock the day earlier and that it was already looking nasty and infected, which is never a good thing on Survivor.

The next day they put their fishing net to good use, catching a fish for everyone and adding to their insane food haul. Lou however couldn’t care less, with her infection making her feel lethargic and sick.

Over at Hermosa, Georgia and Mike were desperately scouring the beach for anything that looked remotely edible. While they found some dragon fruit, which they were able to make into a sweet smoothie with rice. Jak however was not having a bar of it, despite the fact that it looked like Nate and Barb weren’t given the opportunity to eat anything and he could have offered it to them.

At redemption island, Izzy and Tony were having a chat as they packed their bags … and by that, Tony spoke at Izzy while she sat in silence wishing the duel would arrive and grant her silence or allow her to make a break for freedom out of the game. Thankfully for her, Matt arrived for the duel where they were each tethered to a rope wrapped around two wooden obstacles.

Before they got to work, Tony continued to use his words – a lot of words – while attacking Shay. On the flipside, Izzy couldn’t be bothered dwelling on her post-boot anger and instead focused on the duel. She got out to an early lead and despite Tony’s best attempts to catch-up, he wasn’t able to make up the ground giving Izzy the victory and sending Tony out of the game as the third boot.

While he was super disappointed to be out of the game, he was thrilled to have someone to talk to. Given my passion for rambling however I wasn’t so sure, so quickly whipped up a cheeky Mojitony Deane.

Now I’m normally not a huge fan of anything rum but this baby is so tropical and refreshing, I just can’t go past it.

Plus, let’s be honest, I’d suck the alcohol out of a deodorant stick … so enjoy? 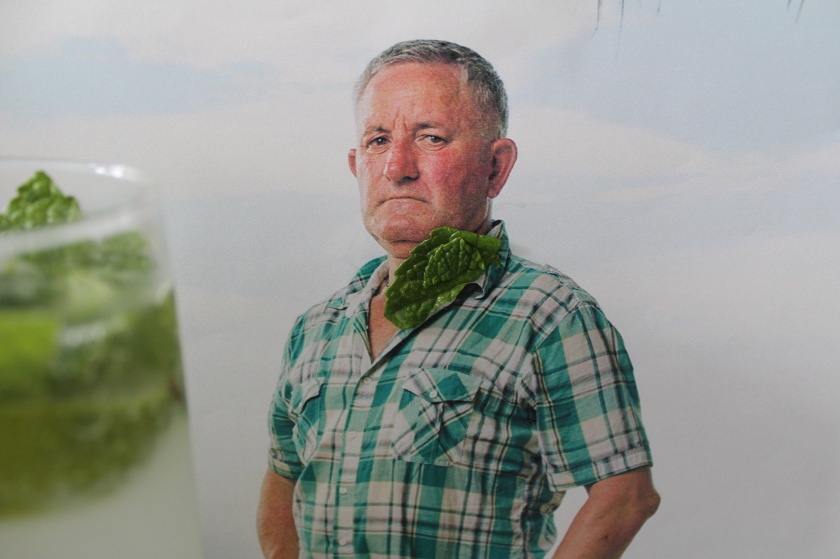 Method
Place the lime, mint and sugar in the bottom of a highball and briefly muddle.

Top with the rum, ice and top up with the soda water.

Give a quick swizzle and down.