Previously on Australian Survivor Abbey continued to roll with the Contenders boys, with their sights set directly on Luke. Knowing he was screwed, Luke searched high and low for an idol and while he couldn’t find one, instead he won a powerful advantage followed by the next immunity challenge. Abbey and the boys identified Pia as the next biggest threat and worked to get rid of her, while Pia worked Luke to see if they could move forward together. Luke played his advantage and senr Baden back to camp, leading to an epic game of whispers and posturing that led to Luke and Pia standing strong and blindsiding Abbey from the game.

Pia, Luke and Harry returned to camp with Baden shocked to hear Pia was still in the game, while Luke celebrated the fact that he pulled off one of the biggest moves ever. Pia joined him to congratulate him on putting on an epic show, thrilled that she was able to charm her way into him protecting her. On the flipside Harry wasn’t thrilled by the turn of events, knowing that he was made a fool of and as such, he could only double down on the fact he needed Luke to go.

The next day the top four sat by the shore and congratulated each other on making it this far, with Luke particularly excited to have broken his record by making day 47. He was also particularly shocked to have not been sent packing as soon as he landed on the beach, given he has played before and showed what he was made of. He then ran through his resume and it was hella heartwarming and honestly, I teared up a little. Even when he went wild in the water. Harry was still salty about the previous tribal council and knew that Luke wins if he makes it to the final tribal council, and as such, he needs to win the next immunity challenge to get rid of him ASAP. Harry also noted that Pia is the next biggest threat, hid behind a meatshield while dominating the game strategically.

Pia returned to camp with a box with a quiz and honestly I wasn’t sure what was happening until they voted for Luke and Baden to get burgers and I realised it was a de facto reward challenge. While Harry shaded Baden’s weak gameplay to us, Baden was proud of the game he played with the hand he was dealt and well and truly exceeded his expectations.

My love Jonathan returned for the second last immunity challenge of the season where the final four each had to try and keep their balls in the air. One by one they would drop a ball at the top of a maze and race to the bottom to catch it and keep the cycle going, slowly adding balls at regular intervals with the last person standing taking out immunity. Everyone worked slowly and methodically with their first ball, trying to get the rhythm of the maze and figure out how they will manage when four balls are in play. Everyone made it through the first and second balls, with the panic well and truly sitting in as they added in their third balls. Pia ultimately was the first to drop. The fourth ball then tragically claimed Luke, followed by Baden, handing Harry his first immunity win.

An exhausted Luke then started to break down and honestly, I have some horrible Kelley Wentworth flashbacks and my heart is broken.

Back at camp Harry doubled down on the fact that he needs to take out Luke if he wants to have any chance of winning. He then approached Baden to lock in their votes against Luke, thought tried to downplay how desperately he wants him out of the game. Baden wasn’t as convinced about who should go next, knowing he has no shot against Luke thought wanting to keep him around because he likes him the best. Luke and Baden then caught up and lamented about Harry’s win, with Luke heartbroken to have fumbled at the last moment and trying to find the perfect balance of convincing them to keep him around without being overbearing.

Luke proposed that he and Baden vote together, and Pia and Harry will vote together and then he will face off with Pia in a fire challenge to guarantee they’re both in the final three and have a better shot of beating Harry and getting to the end. While Baden seemed open to the idea, he admitted that he won’t be able to make a decision until tribal council. Uneasy Luke and Pia caught up with them proposing causing a tie between Luke and Baden, with Pia knowing that he would win and let’s be honest, she is guaranteed a place in the final two as both boys would take her. While Pia wasn’t sure which way to go, she knew that if she couldn’t win, she wants him to to better his family’s life. They then broke down and spoke about how much they mean to each other and honestly, I’m a fucking mess. After that emotional little interlude, Pia went for a walk to try and figure out which way is better for her game, knowing that she can beat both Harry and Baden but realising that neither of them will take her to the final tribal council.

At tribal council Harry continued to think the contrived toothpick thing was cute, while he gave the jury his best shit eating grin as they filed in. He spoke about the pride and happiness of securing himself immunity, and more importantly kept it from Luke. Luke spoke about how hard it was to let his game literally slip through his fingers. His voice started to break as he spoke about having only one option left, sharing that he will be voting Baden and hoping that Pia will join him and force them into a fire challenge. He then went one step further and said that he will take her to the final tribal council if that happens, though assured her that he won’t be annoyed if she voted him out too. She spoke about her current dilemma, not sure whether to play with her head or her heart, and not sure which one actually gives her the best chance of making it to the end. As an aside, keeping Luke gives her the best shot at making it to the end.

Baden admitted that he is not confident should it end in a fire challenge, given he has done minimal work with the flint. Harry tried to praise Luke’s pitch and tell him it makes sense, though tried to get into Pia’s head and tell her that a guaranteed place at the end isn’t better than having to rely on herself to get there. With that the tribe voted and Pia decided to trust in herself, joining the boys and sending Luke out of the game as this year’s fourth place robbed goddess of the season alongside Flick, Michelle and Shonee.

Through tears, I took him in my arms and reassured him that he should be proud of his performance and I’m so glad to once again whip him up some comfort

While I slept on the power of the people’s Champion during his first run – I was a Sarah fan and was always distracted by Locky’s nudity, so, yeah – he well and truly won me over on his second attempt. Which I guess is why he manages to make it deep, and I believe always will, when he plays Survivor. He is laid back, fun and dulls the pain of starving on an island. Like my Luke Tokolate Banana Bread would if Jonathan ever wanted to offer my services for a reward. 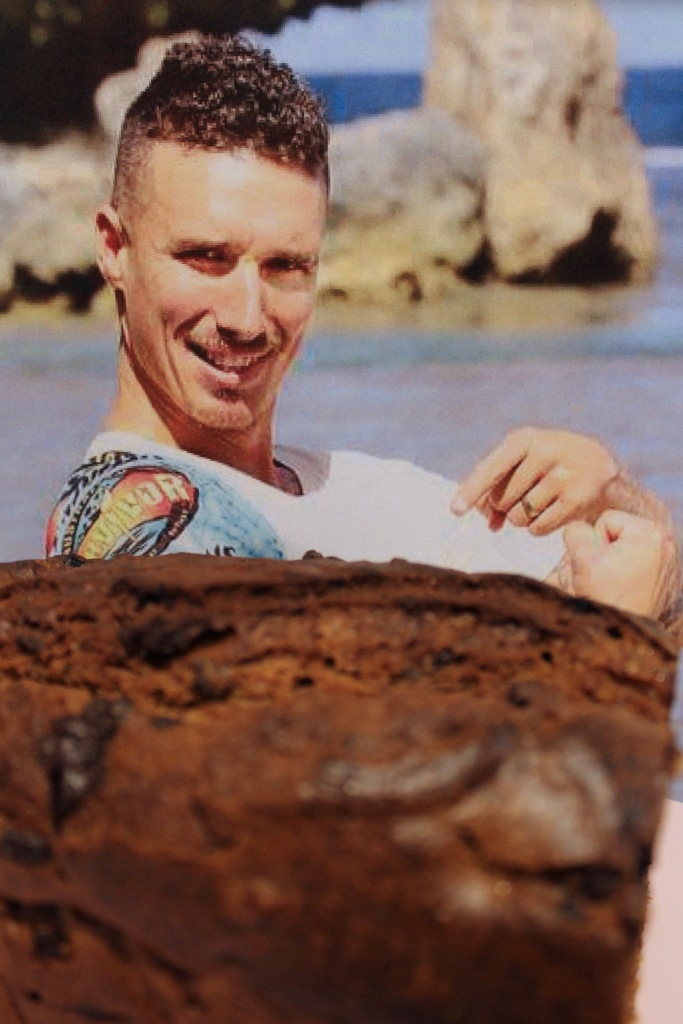 Sweet and warm, this baby may not solve all your problems – right Apu – but it does kind of feel like a culinary hug. Lightly spiced and dripping with sticky chocolate, this is what dreams are made of. 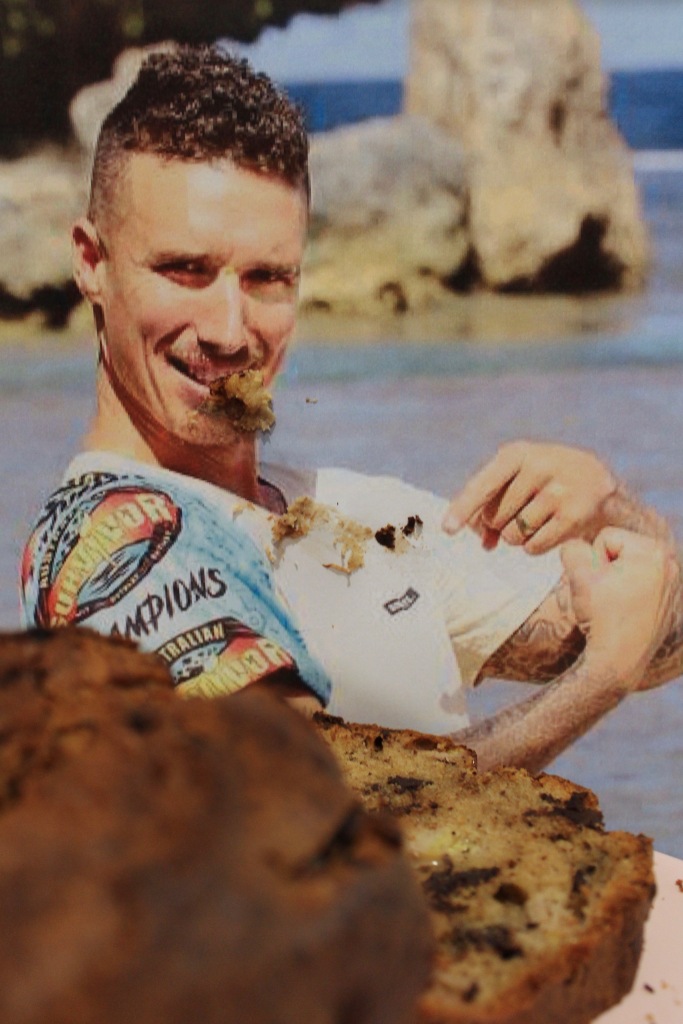 Method
Preheat the oven to 180C.

Combine the flour, baking powder, cinnamon and chocolate in a bowl, and whisk together the muscovado, sunflower oil, eggs, sour cream, vanilla and bananas in another. Fold the wet mixture through the dry until just combined.

Transfer to a lined baking dish and place in the oven to bake for an hour, covering with foil for the last 30 minutes. If an inserted skewer doesn’t come out clean, reduce heat to 150C and return to the oven, uncovered, for a further five minutes.