Previously on Australian Survivor Sharn and Shane were well and truly on the bottom, desperate to find a way to save themselves. Thankfully for them Brian voted Fenella out and upset the other half of Shonella, so when he took Monika on reward and left Shonee back at camp, the three of them formed a new alliance. Despite winning a car – a curse as powerful as my pizza curse – and not winning immunity, Brian survived tribal council thanks to his idol, leaving poor Monika to be blindsided by the SH clique who had a feeling he was packing said idol.

The next day Brian was feeling a bit salty, while Shonee rejoiced in surviving this long and being the final Contender standing. The four congratulated themselves on a game well played and were giddy about their only being three days left. Grubby continued to sulk around the camp, while Shonee listed off her impressive resume from surviving the tribal swap, navigating the post-merge flip-flop and most impressively, Benji’s nachos eating. Hopefully this is start of the winner’s coronation and not a send-off, because I can’t handle a Michelle Dougan situation again.

Meanwhile Shane was dolphin-ing it up in the ocean, talking about the complexities of the mind games and her stellar, not to be fucked with social game. She then shared that her ideal final two would be opposite Sharn, despite the fact she is a killer lawyer and would have an easier time against the disliked blindside. She followed Shonee, listing her resume of blindsides and knowing that going up against Sharn would show that she can defeat the barrister at her own game. Oh and obviously pulling off the blindside of Brian, flushing his idol and his ally in one foul swoop. Given she thinks he is villainous and wants to take him down, however isn’t sure whether taking him out next is the best idea.

Sharn and Shane went for a walk, leaving Brian time to approach Shonee to find out why she flipped on him at the previous tribal. While he pretended to trust her and accept her rational, he vowed to take her down and do what it takes. With that, he followed in the girls footsteps and listed his villainous resume and hoped that his final tribal speech would be interesting and exciting enough to hand him the win. Trying to find new friends, he went for a walk to check treemail with Sharn where they discovered a moral dilemma where a meal was sitting in the jungle and they could either choose to share with Shane and Shonee, both split it or if they can’t decide, the person that wants it for themself gets it. While they debated back and forth for a while, Brian chose to keep the food for himself while Sharn opted to split and as such, Brian got it all for himself. Which he ate, giddily and without remorse.

My boy Jonathan returned for the immunity challenge where the castaways were required to weave discs through a maze suspended on a spring and then stack 12 on top of said maze without knocking them off. Brian and Shonee got out to an early lead while Shane started to close the gap and Sharn took the slow and steady wins the race motto. As you can imagine, this isn’t really something exciting to type about, let alone read … so Brian placed his twelfth and then dropped the stack, as did Shane … and Shonee, leaving Sharn to Steven Bradbury. Wait, nope, she dropped too leaving Brian to snatch immunity on his second attempt. This time with far less arrogance.

Back at camp the ladies congratulated Brian on his immunity win, while Brian was proud of taking out another immunity challenge and quickly identified Sharn as the next boot. He approached Shonee to lock in the vote against Sharn since they were each other’s best hope. Shonee was fairly confident she would be able to turn Shane against Sharn, so approached her to explain how well Sharn has played and how strong she will perform at final tribal. While Shonee would prefer to be taking out Brian, she continued to work Shane hard and assured her that if they are in the final three, she will take her to the end over Brian. Shane and Sharn went for a walk and marvelled at Brian’s luck in the game, before Shane spilt all the goss to Sharn and told her that they were planning to take her out. This allowed Sharn to explain to Shane that if there is a tie between their votes and Brian and Shonee’s, Sharn and Shonee would make fire and as such, they would win out in the end.

After locking in a deal with Sharn, Shane approached Brian to see where his head was at and told him that she would be interested in flipping to them and taking out Sharn as it is their best chance. They roped in Shonee and the three agreed they would vote together, which made Shonee feel even more nervous about the vote ahead. As such, Shonee approached Sharn as she felt she was the most trustworthy person left in the game and floated the idea of joining together to take out Shane instead. Sharn acknowledged that Shane was her biggest competition left in the game and as such was conflicted about which way to go at tribal council.

At said tribal council Brian spoke about only being able to trust immunity at this point in the game, Shane agreed that she doesn’t really know who she can trust, however admitted that she planned to stick with her loyalty and hope for the best. Sharn spoke about being nervous about tribal, though planned to trust her gut, while poor Shonee spoke about not being able to trust anyone until after the votes are read. She hoped that the people she spoke with during the day and felt on the same page as were being honest and things would work out for her.

Sharn acknowledged people needing to play for the jury, trying to sway Shane into staying loyal by painting the jury as not interested in an easy – sorry Steve, giving – win. Shane said that some of the jury actual prefer the villainous gameplay, though admitted that past loyalties would come into play in the final vote. This led to Brian admitting that all the contenders would potentially vote for Shonee and as such, she is a threat. Though he backed the game he played. Sharn spoke about not knowing if she can beat everyone in the end, while Shonee tried to sway her by talking about sticking with her gut. Fellow gut-gal Sharn said that she too would be sticking to hers and with that, they headed off to vote and Sharn and Shane stuck together while Brian and Shonee didn’t, leaving Shonee to be tragically felled in fourth place.

While I desperately wanted to scream at her for essentially 2-1-1-ing herself out of the game and not even trying to go to fire, I couldn’t stay mad at her and instead broke down in tears over the fact that not only were we robbed of a Shonella final two, she follows in the footsteps of Michelle and Flick of being the fourth place robbed goddess. She held me close as I sobbed for all that we, Australia, lost until I was strong enough to serve her a comforting bowl of my Chicken Shomein Fairfax. 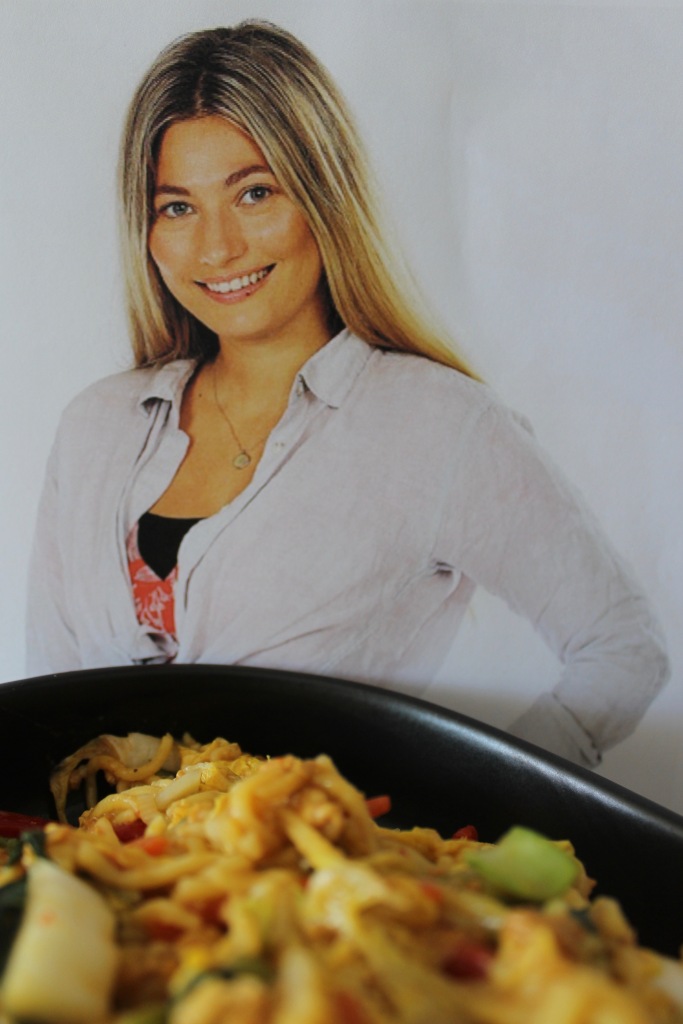 Sweet, spicy and packed full of comforting carbs, chow mein is one of those dishes which look complex but are super easy. So easy you can cook while blinded by the combination of tears and rage. 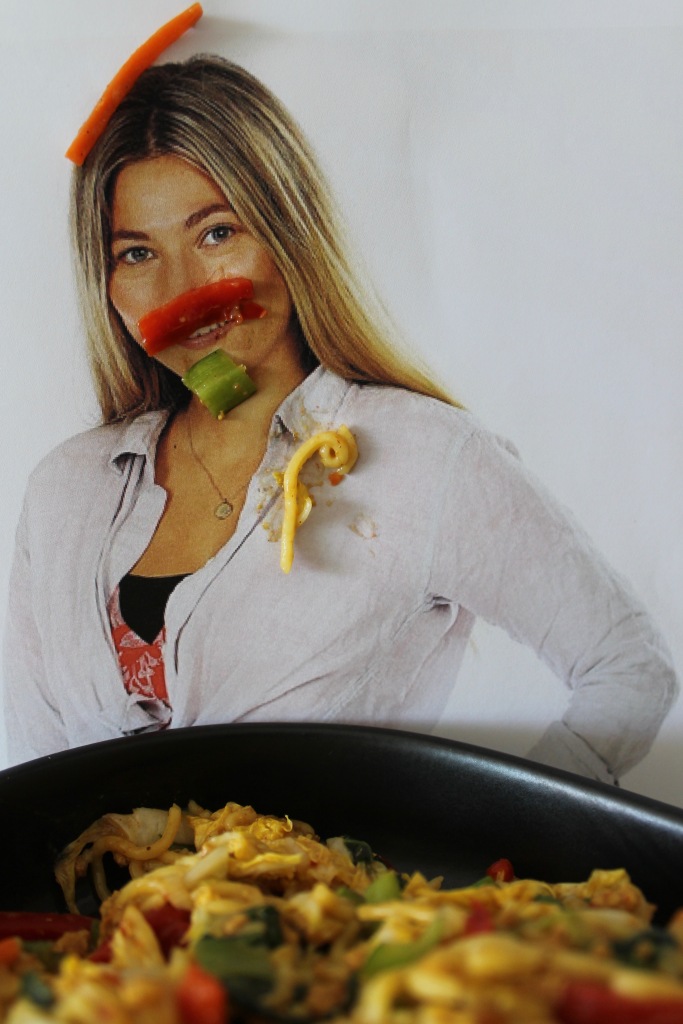 Method
Seperate the noodles in a large bowl and cover with boiling water for five minutes or so. Drain.

Remove from the heat, toss through the noodles and devour, piping hot, with plenty for hot sauce in honour of her spicy confessionals.