It is always a rush when following through on an egg-based ritual to return fame, foretold in a vision quest in Palm Springs, the celebrity desert.

For the past decade we have struggled with our dear friend Meg to find the correct celebs to force into helping our ritual to return us to the A-list, but alas it has only come true for two of us.

As we have known Meg for such a long time, having met her on the set of When a Man Loves a Woman (Annelie was her stunt double for the shower scene and I acted as her alcohol coach) and continued on as her personal security until we were fired for leaking stories to the tabloids and befriending her across the canyon neighbours, the T-Austins (in a dark period in our friendship, we egged her house).

Thankfully a desire for fame is a huge motivation for forgiveness and Meg never held a grudge and we still have fun with each other in the lead-up to our annual ritual.

In recent years Meg has been enjoying a slight career upswing, playing an obsessive stalker with OCD on Web Therapy (a role loosely based on one of my incarcerations) and we have taken it as a sign that she is on the precipice of returning to greatness. As such, we decided the best way to start this year’s ritual was with a batch of Sweet and Spicy Devilled Meggs Ryan. 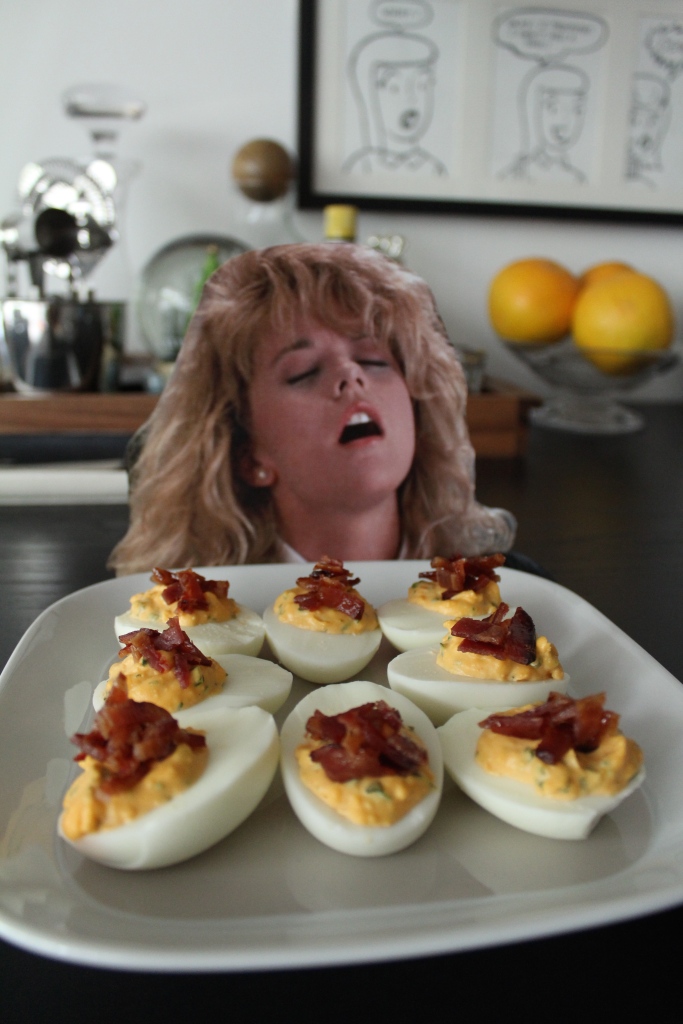 The maple bacon counters the kick of heat and if our calculations are right, she should be having what we’re having…an A-list resurgence.

Method
Preheat oven to 180°C and line a tray with baking paper. While the oven is heating, marinate the bacon in the maple syrup. When the oven is at temperature, lay rashers on the tray until caramelised and crispy, should be about ten minutes. Remove from oven and set aside to cool.

Cut all the eggs in half lengthways and remove the yolk to a bowl. Mash all of the yolks until smooth-ish and then mix in the mayo, sriracha, mustard and herbs. Season to taste.

Spoon the yolk mixture back into each egg cavity and place on the serving plate.

Finely chop the maple bacon and sprinkle over the eggs. Devour and know that phase one was a success.