I know I came off like a sad sack on Saturday, but it just breaks my heart so completely to think that Megs hasn’t returned to her 80s-90s glory. The woman is a damn saint and deserves it … more than anyone!

I was so sure that Ithaca would be her ticket back last year but sadly it barely registered on anyone’s radars. I’m not saying it deserved to be the third movie involved in the Best Picture brouhaha of 2017 … but I’m not not saying it either.

Once again, Megs was an absolute delight and downplayed the necessity of the catch-up.

“Ben – you don’t have to do this, honestly, you’ve tried. Maybe I’m not meant to be on the A-list anymore.”

Um … over my dead body Megs!

“Plus my dear, sweet Ben – I can’t be the first person to have a hat trick of dates on your highly-lauded, prestigious, future-award-winning and meaningful anthropological documentation of your close, personal relationships with celebrities told in a culinary fashion.”

Again, it took a few hours and our wine went warm before she finally agreed to give the Meggstravaganza another shot!

But honestly, who could refuse a freshly cooked Meggs Benedict Ryan? 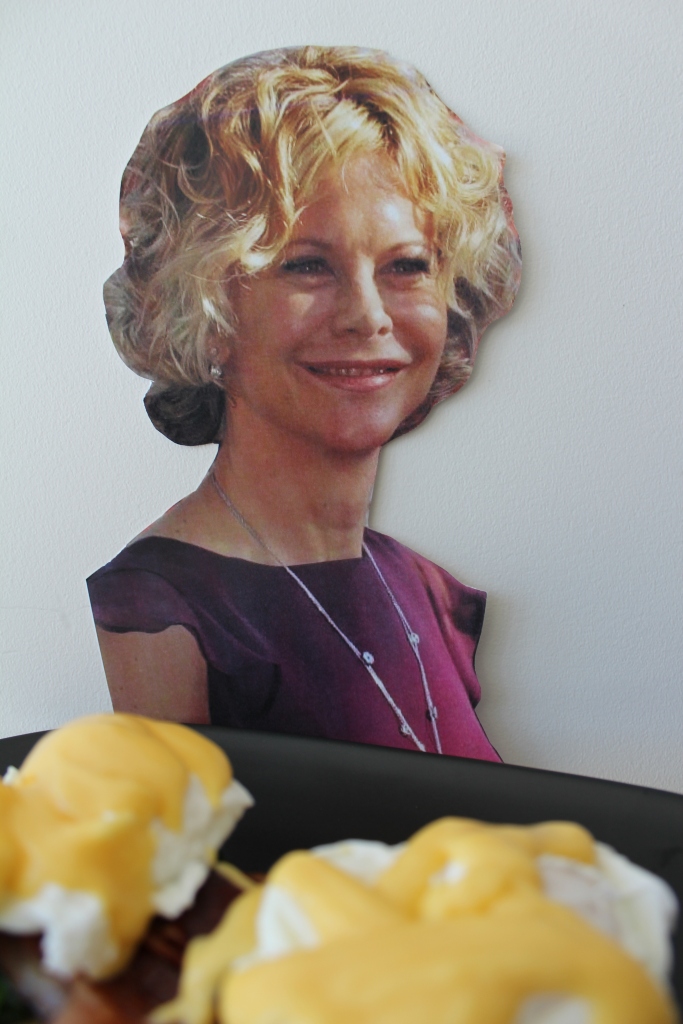 I know the ritual only calls for five celebs, but I figured whipping up a gang bang of celebrity recipes to make Eggs Benedict could not hurt.

Plus there is nothing than a fresh benny served on Jon English Muffins with a tart heaping of Hollandaise Taylor.

To Meg, her career and the perfectly poached chicken period – enjoy!

Method
Place a large pot of water and a dash of vinegar over high heat and bring to the boil.

While that is getting hot hot hot, heat a skillet over medium heat and fry the bacon until crispy. Remove to some paper towel and keep warm. Quickly wilt the baby spinach in the same pan, removing from the heat when done.

Split the muffins and toast and smear with avocado. You could use butter … but why? Top with some wilted spinach and bacon and leave to rest.

Also, whip up the Hollandaise Taylor as per the recipe.

When the water is boiling, reduce to a simmer and carefully crack the eggs into the water, folding the whites around the yolk with a slotted spoon to keep them beautiful and together. Cook until your desired doneness – which should be just completely cooked whites, FYI – and remove with a slotted spoon. Place on top of the bacon and drown the entire thing in hollandaise before devouring.