Oy Céline, the way you break my heart (serious Toni, unbreak it for me)!

It was the first time I’ve seen Céls since René’s funeral and the way she is powering through is just so inspirational. We had had a decade long estrangement in the lead up to his passing after I sold a story about them to the tabloids in 2001 but thankfully her kind heart knew that he deserved closure before his death and she reached out to help us clear the air and reconnect.

I first met Céline in the early 80s while competing against each other – and Bryan Adams, but that is another story for another time – in the 1982 Yamaha World Popular Song Festival. Against type, I never held her superior performance against her … because I knew that it was smarter to buckle in and ride her coattails to fame.

Thankfully Céllo recognised the  talent I possessed and we went on to enjoy a successful period of co-writing songs, culminating in her 1988 Eurovision Song Contest winning song Ne partez pas sans moi – if only my fellow Brisbane girl Dami had taken me up when I offered to write her song!

After winning such a prestigious competition, I went off to Hollywood to diversify my portfolio (to open up some options to snag my EGOT) while Céllo returned home to Canada to commence work on her first English language album. Obviously her album was a success, so when Jim asked if I knew of anyone that could sing vocals on my song for his film Titanic – oh yeah, I’m friends with Jim Cameron – I knew she was perfect!

Sadly she didn’t listen to my fashion advice on Oscar night … and James Horner had my name struck from the song’s credit!

Despite the fact that she is such a trooper, we stayed up most of the night – while the wind was so cold – talking while I helped her work through her grief, process all the turmoil that started her year and plan the next steps of her career.

Given how much we achieved together, you just know we had to have eaten something substantial, comforting and invigorating – yep, I made my famous Céline Dijon Chicken! 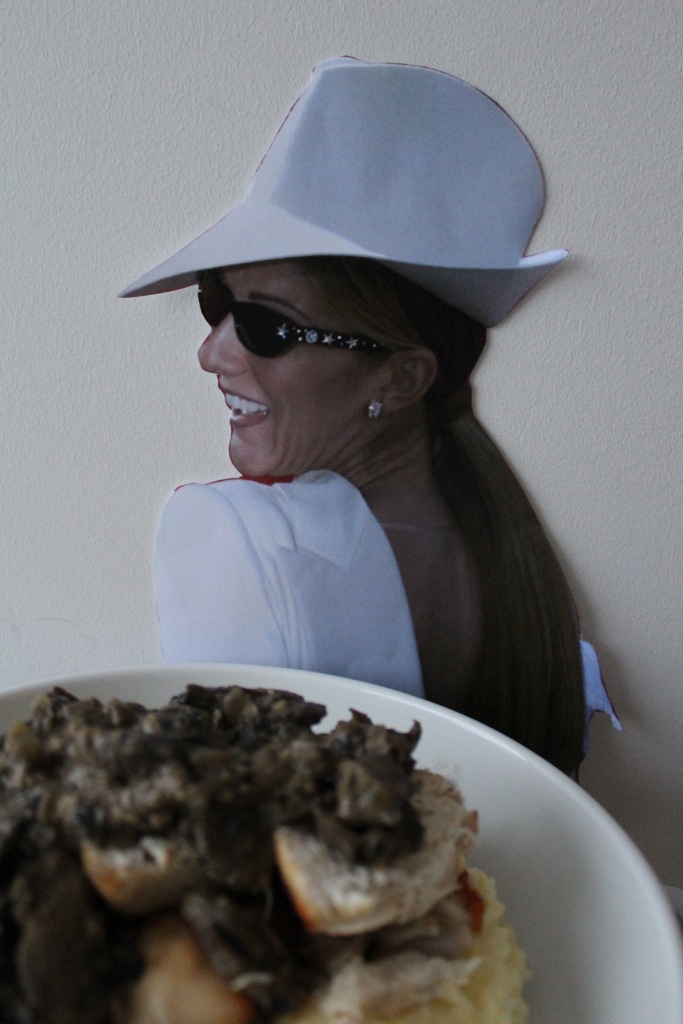 As a good ole Quebec girl, Céline loves herself some delightfully French dijon (culminating in us snorting it together like a party drug in Tokyo in 82)! After the mustard started to wear away my septum, I knew I had to come up with a healthier way for us to indulge our addiction so I added in some chicken, brandy and mushrooms, and that mustard really started to sing.

Method
In a pan, heat a lug of olive oil in a large pan over high – when as hot as CD’s career, reduce heat to medium-low. Season the chicken breasts and fry, skin-side down, for about 5 or until golden and crisp. Turn over and seal the meat for a minute or two. Remove from the pan and leave to rest.

Sweat the garlic and onion to the pan and cook until soft. Add the mushrooms and fry until they are soft and silky. Stir in the mustard, tarragon, white wine and a splash of brandy, then reduce for 2 minutes.

Reduce heat to low, add the chicken, skin-side up, cover and simmer/steam for 10 minutes. Remove the lid and cook, uncovered, for a further 5 minutes, stirring occasionally, until the sauce is your desired consistency.

Slice the chicken and serve on a bed of fresh, creamy mash, lashings of the sauce and garnish with some fresh tarragon leaves.

Enjoy the new day that has come … in your mouth.