Previously on … hang the fuck up, what is this fresh hell. Where am I? It walks like a duck, acts like a duck but sounds like a moa! I’ve been bamboozled, and this is Survivor New Zealand!

In any event we are in Nicoooraaaguuua, where we first met Lou who channelled me and had zero idea about basic global geography. Next up we met the funny and charming Dee which sounds more ironic, and Tony who was cool with spiders and Sala who most definitely was not.

The castaways were trucked on to the beach where Shannon the zookeeper quickly won me over with her super fandom before the host – my frenemy Matt Chisholm – butchered the pronunciation of Nicaragua for the second time, as he welcomed the castaways.

We once again got some facetime with Dee who was thrilled to be here and face a tribal council before announcing she was thrilled to play as the villain, cementing her as my red-hot favourite for first boot.

Mike however wasn’t convinced Dee would (last long enough to) be the villain, Nathan didn’t like his chances in challenges and Tony mumbled his way through something … I think about being a provider but I honestly have no idea.

Immediately overtaking Shannon as my fave, we were introduced to Hannah the plus-sized model, roller derby competitor and power lifter – fucking swoon! Matt then christened her the queen of the Mogotón tribe – in addition to my heart – joined by Avi, Izzy, Lou, spider-fearing Sala, Shay, Tom and spider-loving Tony.

On the flipside, Barb was thrilled to be a part of the purple tribe aka Hermosa, as was Georgia who just felt like it was better for her while poor Nate had zero interest in the tribe since he felt he better connected with people on the other tribe. They were joined by Jak, Lee, Mike, Nate, Shannon and the infamous Dee.

After Tom lamented that all the people he connected with landed on the other tribe also, begging the question – is this actually day one? – my boy kiwi Probst dropped the bomb that both tribes would be joining him later that night to vote out a member each. Dum, dum, duuuummmm – that sounds ominous, no?

Everyone was rightly concerned about the twist, realising they’ve given up more than a month of their lives to spend less time on the island than Jonathan and Wanda. I wonder if one of the first boots will write us a song?

Wanting to give us some instant drama, Matt announced that the tribes could loot as many of the items placed they had scattered around the beach in a set amount of time which I can not for the life of me remember, so let’s say it was two minutes. Or one. I don’t know, I was drunkenly heckling from the back of the truck they just rolled up in.

Izzy was quick to play dirty – or heroically if you frame it like Rupert being a pirate in Pearl Islands – and stole the items from the other tribes’ mat while they weren’t looking which upset Lee … which in turn made me happy as he shared his pain with a camera angle clearly framing his crotch.

Lee was not alone, with the entire Hermosa tribe well pissed leaving Izzy to have immediate regret for her actions and attempt to give them a pity knife which Lee tossed back to her … and then Nate told Jak to go get back. It was as odd as it sounds.

Mogotón arrived at camp with their abundance of goods slash collection of throwing knives, where Tony was quick to take on the role of leader and share his wealth of survival knowledge, rubbing his tribe mates the wrong way during his monologue. Avi however wasn’t bothered by his assertive behaviour or the casual sexism, given that it keeps the target off him.

Hannah continued her assault on my heart by killing a crab and complaining about Tom underestimating her because of her weight, rather than trusting that she is strong. Izzy and Shay were also concerned about Tom’s shiftiness and the three agreed to blindside him at tribal that night. She then worked her ass off lugging rocks everywhere and almost single-handedly built the camp. Kween.

Shay then approached Sala to join her and the girls but was swiftly and sadly rebuked, with Sala telling her that Tom and Avi want Hannah or Izzy out at tribal that night and he was on board.

Over at Hermosa, Dee took a leaf out of Tony’s book and decided to appoint herself leader before outlining her extensive preparation – to us – to appear nice. She then got to work aligning with Shannon and Georgia, both of whom had little interest in aligning with her.

Proving that she gives zero fucks for the aforementioned alliance, Georgia immediately approached Mike to form an actual alliance … though was so obvious about it, she spooked Lee. Mike then pulled Nate aside about aligning with Shannon and Georgia, putting the final kibosh on poor Dee’s alliance. Then Barb put the final nail in Dee’s coffin and confirmed that she didn’t trust her and wanted her gone ASAP.

Nate however was less convinced that the alliance would hold due to his age, before being proven right when Shannon and Georgia introduced casual ageism to the episode. Sensing trouble, Dee attempted to channel Queen Sandra Diaz-Twine and told Mike she was willing to vote anyone other than her before throwing Barb’s name out and continuing the ageism.

Back at Mogotón, Shay pulled Hannah aside and told her that the tribe were planning to target either her or Izzy. Izzy pulled Sala aside and gave a less than rousing speech about how Hannah may be weak but she is also strong and that they should target Tom, which is the perfect way to segway into the first tribal councils of Survivor NZ.

Mogotón were first up, where Tom felt it was rough that someone would have to go home on day one which Lou agreed with before adding they’ve barely had the opportunity to get to know people. Hannah continued to win me over, imploring people not to trust a book by its cover while casually dropping all her skills into a single sentence. Avi made an early play for worst deflector at tribal council, saying that he can’t have everyone’s back when asked point blank if he had Hannah’s. Oy.

Tony proved that he was more self-aware than I gave him credit for, saying that people had been biting their lip around him before outing the fact that alliances have been formed despite any and all denials. Sala spoke about his integrity before Izzy spoke about feeling uneasy after giving up the knife that she stole from the other tribe … before Matt reminded us they were playing for the runner-up prize of O.G. Survivor as they headed in to vote, incorrectly folding the parchment.

Sadly as quickly as she won my heart, Hannah became the first boot of Survivor NZ before Matt quickly ushered in Hermosa to claim his next scalp.

Hermosa were quick to address the fact that they were naive to trust the other tribe at the looting before Georgia spoke about how much she loved everyone, to which Matt – winning me back over in the process – called bullshit. Shannon name checked Heroes vs. Villains before Matt checked in with resident villain Dee, who was quick to disassociate herself from her previous assertions. Lee danced around Matt’s questions about alliances before Dee jumped back in to spook the sensors as they went to vote.

As predicted – YAS me – poor Dee became the first person voted out of Hermosa and the second person voted out of Survivor NZ … or is she? Yep, the sound you’re currently hearing is Survivor fans across the globe screaming about the return of redemption island … though yay, Hannah is still here! Silver linings, people!

Anyway back at camp, Hermosa got to work building a fire, blissfully unaware that Dee was still alive in the game, plotting her revenge. Over at Mogotón, Tony wasn’t having as much luck proving his worth slash making fire, while Shay spoke about how guilty she felt for voting against Hannah.

The next day Hermosa got to work expanding their shelter before sitting down to an ill-advised meal of rotten fruit. Meanwhile Izzy had fallen ill at Mogotón and was questioning quitting on day two – maybe she ate some of the rotten fruit – proving once again that they should have kept Hannah in the game.

Speaking of Hannah, both tribes were finally clued in to the fact that she and Dee were not out of the game – yet – and that they were about to compete in the first redemption island duel, a classic where they both had to work a big strong pole, stick it into a hole and release themselves from behind a cage.

Hannah got out to an early lead, snagging the first two keys before Dee had even managed to work up a pole. Despite a valiant effort from Dee to even things up, Hannah secured the third and final key, released herself and sent Dee packing as the first official elimination of the season.

Despite feeling upset to become the first boot, Dee was ok with the fact when she spotted me in loser lodge. You see, I connected with Survivor superfan Dee when she briefly stalked this here patch of cyber-space as part of her weekly Survivor media coverage. Being desperate for even the faintest whiff of positive attention, I started a Fame Hungry fan club for her and made her the president and founding member.

The dish we served at her inauguration brunch – and to cheer her up post boot? Obvi my roasted Deetroot Harper Salad. 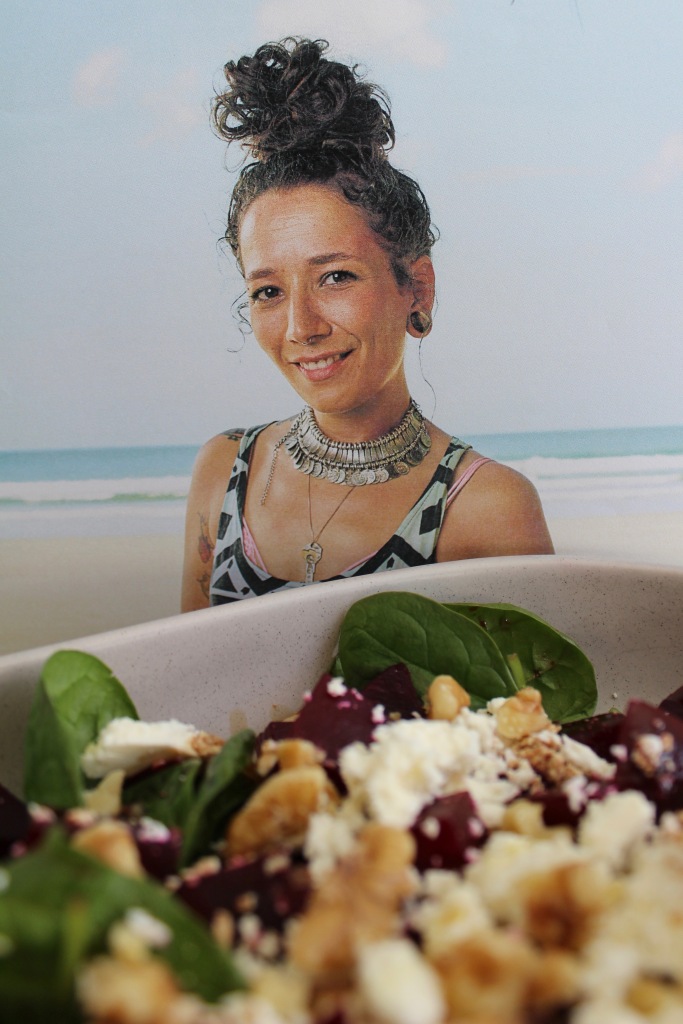 This little baby goes a long way to proving the ancient Australian proverb “you can beat an egg, but ya’ can’t beat a root” correct because these roots are bloody stunning. Sweet, warm beetroot, creamy feta and the tart balsamic are perfectly complemented by the crunch of walnut and pepitas.

To the kitchen, ya … enjoy!

Wash the beetroot, roughing up the skin a bit as you go. Wrap each in foil, place on a lined baking tray and bake for an hour.

While the beetroot is cooking, combine the feta, walnuts, pepitas and spinach in a large bowl. Add a lug of balsamic and olive oil, season and toss.

When the beetroot are done, remove from the oven and allow to rest for five minutes. Unwrap the foil and gently rub the skin away from the beetroot – which it should do, but if not peel them now – cut into large chunks and toss through the salad.

Serve with the beetroot still warm and devour.