It felt like such a relief to be able to just jump in the car and drive a couple of suburbs this week, rather than having to get my people to organise the logistics of transferring major A-list celebrities to-and-from Brisbane Airport without anyone realising they are in town. I don’t want to complain about my blessed life, but sometimes it does get exhausting.

As I mentioned, I was once a swimming trainer – mainly to fulfill my passion for men in speedos and/or super tight pants – here in Brisvegas, as we oft loathsomely say. While my students feature the who’s who of Australia’s swimming elite – obviously though Grant Hackett and I used to booze together and Kowalski and I … well – my personal fave was little Stephy Rice.

I mean, sure, she felt it appropriate to tweet a homophobic sledge at a rugby team in 2010 but she did actually seem remorseful – plus, it’s not like I haven’t forgiven someone for making stupid statements – and apologised profusely. Shockingly I made the mature choice and accepted her apology and moved on … on the express condition that she appear on The Celebrity Apprentice.

While I stacked the cast with an actual businesswoman to shame her out of the competition and my nemesis Dawn Fraser – who hates that we’re close – she somehow won the game. Sure it further inflamed my rage for a couple of hours, but then I had to admire her moxie and we’ve been the dearest of friends ever since.

Sadly for the ailing Australian swim team, I couldn’t convince her to join me in staging a comeback but it was such a treat to catch-up and reconnect. We laughed, I briefly made her cry like she was apologising for a homophobic slur – despite her aggressive suggestions to the contrary, she is obviously voting ‘yes’ in the offensive same-sex marriage postal survey – and we ultimately became closer than ever before.

Though maybe that is just the Stephanie Fried Rice talking?

There is nothing better than fried rice, particular when it is sans prawns. Spicy, fresh and with a kick of heat, this is the perfect comfort meal to mend friendships and alleviate hunger. 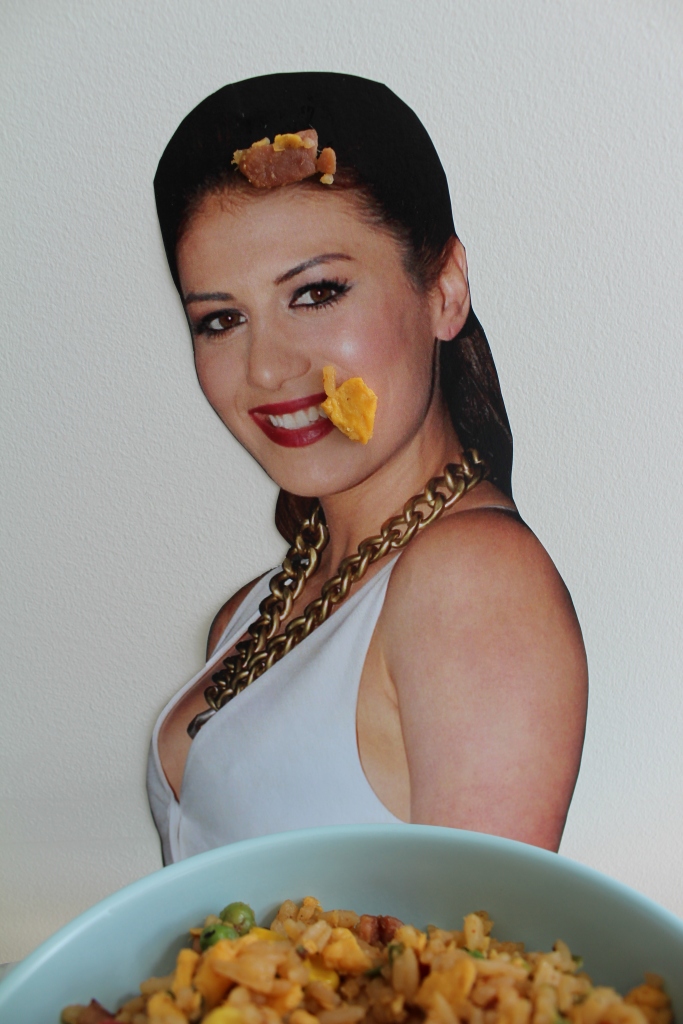 Method
Heat half the vegetable oil in a small frying pan, and lightly cook the eggs until they form a delicate omelette. Leave to rest.

Heat the remaining vegetable oil in a large frying pan and add the bacon, frying until crisp. Add the garlic and shallots and cook for a further minute, or until fragrant. Add the carrot, corn and capsicum and cook for a further five minutes. Add the rice and cook, stirring, for ten minutes before adding the sauces and a good whack of salt and pepper.