Previously on Australian Survivor Shonee purchased a jar of lollies and a vote steal at the merge auction, while Benji remained the only person left with an idol after winning immunity at the last channel. I mean, Sharn found a hidden immunity at said challenge, however crapped it out and lead to Benji flushing it out, While she tried to play it on Mat who was getting blindsided by Benji’s insurgence, he managed to take her down and forced her to play it on herself. That of course led to the successful blindside of Mat, leaving Benji to return to camp with a ropeable Sharn, Steve and Shane.

Back at camp things were hella tense and while Benji, Brian, Shonella and Monika were thrilled, zaddy Steve held Shane and Sharn close and comforted them over their loss. Benji then gloated about being the new godfather while Steve and Sharn were in tears, making me hopefully for his downfall after serving his chaos purpose. Thankfully Benji’s hardcore play stoked a fire in Shane and she vowed to channel Russ-hole and sabotage the fire and bring an end to the game. The next day Queen Shonee noted that there was a post blindside shift and while she was worried about it, Queen Shane reminded us not to fuck with Shane Gould and hot damn I need that final two to happen right now.

Everyone tried to pull together, congratulating each other on making it as far as they have until it got hella awkward as Steve and Sharn awoke and Benji tried to be pleasant with them. Sharn then shared about how torn she was, to be screwed by Benji and feeling so alone despite being a strong as shit woman. Albeit, stuck on the bottom. She decided that getting Brian and Monika back on board was her only chance for survival, so approach Grubs to return to the Champion strong mentality and get rid of Benji. While he was awkwardly trying to dance around, she played the bottom perfectly and assured him that Mat’s blindside doesn’t impact on their relationship, and she is willing to use her past with Benji to benefit him and Monika. Sadly Brian saw right through the attempt and vowed not to buy her pledge. Brian took the intel back to the Mighty Ducks alliance and Benji’s ego continued to grow, pushing for loyalty and taking out his ex-ally Sharn.

My boy JoJo and the belly-flop structure of Monika’s nightmare returned for the reward challenge where the tribe would be split in half and race to jump off a tower, grab a ball a shoot as basket, with the first to three snatch fried chicken, chips and softies and DAMN it is worth it, no. Benji and Shane were team captains, with Benji snagging a team of Steve, Fenella, and Shonee leaving Shane to take Brian, Sharn and Monika. Tragically Shane lost the first point to Fenella, despite being a boss. Next up were Benji and Bellyflopika who pencilled dived her way to safety while Benji scored a second point for his team. Brian peed from the platform before battling Steve – and maybe a UTI – who didn’t bellyflop his way to the end, unlike Brian who punched it to the end and got the other team on the board. Lucky he unloaded, right? Shonee and Sharn were next, with Sharn tragically slaying Queen Shonee and tying things up. Shane and Fenella returned to play for victory with Shane nudging the ball out in front and snatching victory like a boss, leaving Fenella desperate for some swimming lessons and Steve in awe of her mad skillz.

Benji and the losers returned to camp with Shonella just glad to get a double portion of rice, while Steve quietly sat and observed what was happening. Benji went for a walk with Shonee, where she shared her vote-steal secret with him, hoping to use it to go from Indian to Chief which is problematic but I feel like it wasn’t meant to be malicious. Meanwhile at the reward, fried chicken proved to be the great equaliser, bringing Brian and Monika back into the Sharn and Shane fold. Shane knew it was her shot and used the time to find a way to undermine the Benji alliance, while Sharn completely missed an idol clue in the ice bucket at the reward. The four agreed to put the previous tribal behind them and to instead focus on taking out the biggest threat in Benji, with Sharn floating a blindside at the upcoming tribal. Shane and Sharn continued to downplay their betrayal to try and bring everyone back together, with them hopeful about succeeding … despite Shane not trusting Brian. Not to be outdone, he made a song and dance about searching for an idol clue, only to casually find an idol at the reward without anyone noticing.

Forgoing any camp action, JoJo returned for the immunity challenge where the tribe were required to bounce a ball on a disc while standing on a box, with Queen Shon hopeful Mat’s departure could even things up for everyone. Tragically Shonee and Monika were out almost instantaneously, before Fenella dropped her ball and joined them. They were then joined by Sharn, leaving Shane and the boys to battle it out for ten minutes. Tragically Queen Shane was next to fall, leaving Brian to try and distract Steve and talk about who is more skilled with balls. Spoiler alert: I am. After an hour, JoJo transitioned them to one hand with Benji dropping, followed closely by zaddy Steve, handing Brian with his first immunity.

Back at camp Benji was feeling super confident about his place in the game, which Sharn pulled Brian and Monika aside to lock in a vote against Benji. Despite Sharn not trusting Brian. The remaining Contenders caught up by the shore, with Benji admitting to feeling nervous about the upcoming vote. He then approached Monika to share that the Contenders were planning to use Shonee’s vote steal and that they would be tying things up if she didn’t jump. Zaddy Steve then got in on the act with Monika filling him in on the plan as they tried to figure out a way to possibly save Sharn. Steve and Sharn caught up, with our two twin-esque heroes struggling to find a way to save her and get to the end. Sharn in particular, struggling with the idea of going out.

The Mighty Ducks alliance were catching up over coconut as Sharn and a sneaky Brian loitered around trying to find some intel. Knowing that Brian is the key to their success, Shonee and Benji pulled Brian aside with Benji saying that Sharn was planning to vote him out … DESPITE THE FACT HE IS IMMUNE. Shonee was obviously ropeable, knowing Benji’s stupidity likely cost them another blindside as they madly tried to pretends she was planning to take him out in the future.

At tribal council Jonathan was quick to remind Sharn of her idol fuck-up at the last tribal council, with Sharn admitting Benji rattled her and cost Mat his game. Benji admitted he only told her to play it for herself to avoid his Mat blindside being ruined. Steve spoke about being heartbroken by the vote, while Benji and Brian gloated about how great a move it was. While Mat was pissed in the jury. Shane gave him kudos for the gameplay but admitted she was pissed … and then sabotaged the tribe but destroying the fire and being an absolute Queen. Reminder: don’t fuck with Shane Gould.

Sharn too was hurt by Benji’s move, Benji tried to downplay the situation as a group move and Shonee explained that had Mat not been destroyed, she and her allies would have been left to wonder who would be next. Sharn spoke about feeling nervous and needing to stay honest, while Benji spoke about finding people to trust and accepting deception is part of the game. Monika spoke about trusting her gut and relying on how she felt when talking to her allies, while Steve shared that it is all about faith and that having faith in people can save you. Before they headed off to vote Shonee played her vote steal, snatching Sharn’s and using it to vote for Sharn … twice. Tragically all it did was tie things up, much to Shonee’s frustration. Though thankfully it lead to the downfall of Benji, ending an epic albeit at times frustrating arc as zaddy Steve giggled like a bae.

Now I KNOW i have given Benji a lot of shit but bitch stole my place on the cast and I am hella jealous. I mean, we are both called Ben, have Sideshow Bob hair and a penchant for flaming out, so I assume that is the only reason I wasn’t there. That being said, he managed to keep this season interesting and without his wild, villainous, oft-nude ride, we’d be pretty bored. Which is what I said as I apologised for yelling at him over some Benjami Drops Wilson. 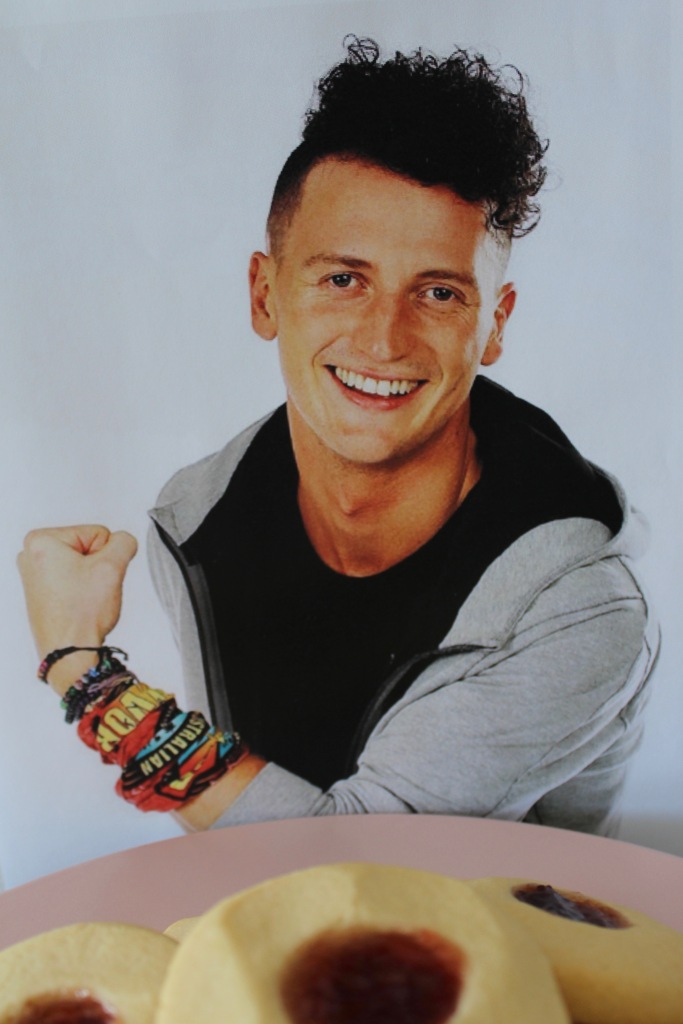 A little bit sour and a little bit sweet, these are the perfect food to honour his sneaky, glorious game. On top of that, they’re fucking delicious. Like the rise of villain Queen Shane “don’t-fuck-with-me” Gould. 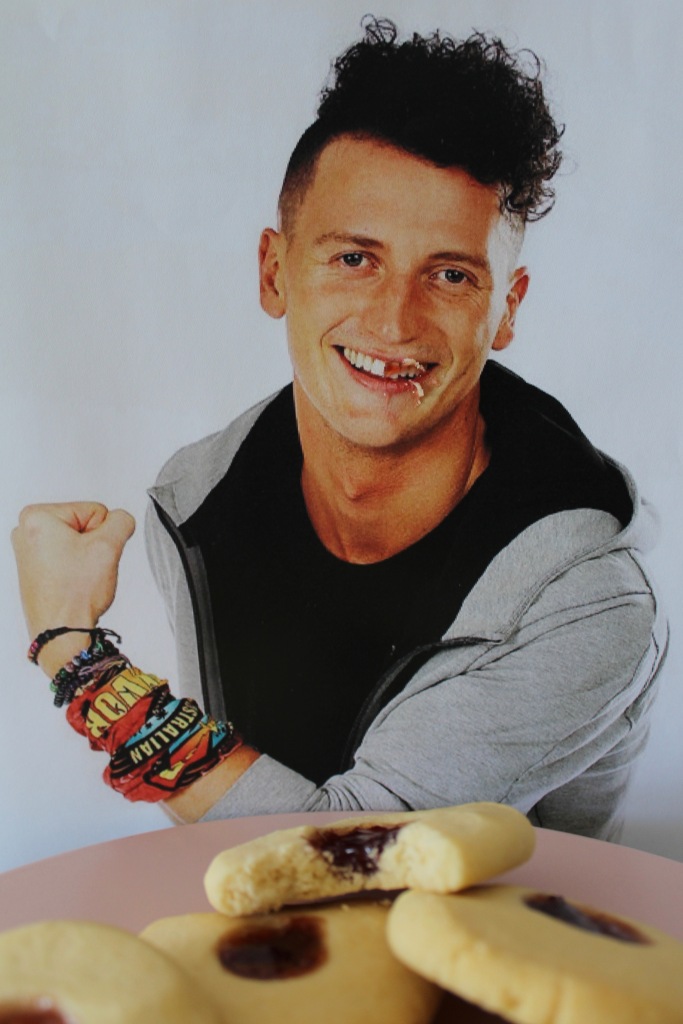 Method
Cream the butter and sugar in a stand mixer for about ten minutes, or until pale and fluffy. Add the vanilla, egg and zest and beat until just combined. Add the flour, fold through, and then beat for a further minute or so, or until the dough comes together. Cover and transfer to the fridge to chill for an hour.

Roll the dough into golf-ball sized balls, place on a lined baking sheet and flatten to form small discs. Repeat the process until all the dough is gone. Make an indent in each disc, fill with a small dollop of jam and transfer to the oven to bake for twenty minutes.

When lightly golden, remove from the oven and leave to cool slightly before transferring to a wire rack to finish off. Or just devour, whatever you’d rather.