So speaking of Beyonce – one woman’s curse via recipe is another woman’s gain … and that woman making the gains was none other than my dear frenemy Adele.

Uggggghhhhhhhh. And contrary to what some may think of me, that wasn’t a shady comment about weight. Glass houses and all, you know?

Also let me start by saying that firstly, I love Adele … but the slag can fucking drink me under the table and I hate to lose – particularly if said competition I am losing is based on alcohol consumption – so as such, she is more frenemy than friend.

Plus – she keeps winning things and Jesus loves winners and if she is winning, maybe sometimes that means I’m losing. Which is terrible.

Anyway the ol shagger has not only won a shit tonne of Grammys but is also the proud owner of an Academy Award for Best Original Song which is, quite possibly, my favourite category (because when I’m nominated in 7 years, I get to perform the song on stage the same night I win 15 awards).

I should probably tell you about my past with Adele though, shouldn’t I? I first met Adsy ten years ago when I stumbled upon her busking on the tube or something – I was big into bath salts at the time so don’t remember much. I do remember she had talent though and took her under my wing and decided I would one day make her a d-list star to rival Kathy Griffin (read: they are both red(ish)heads).

Halfway through my tutelage of her I sobered up and realised that she is just someone that is skilled at writing sad music and holding notes – I must remember to see Chris Martin one day soon – and told her that she should give up on her dreams, lest she wanted my forehead to chase itself into the pavement.

It inspired her hit song and gave her a career … but did I get any thanks? No. Which is another reason we are frenemies. I also inspired her Oscar winning song Skyfall – it was about balls and is meant to be part of Lil Whorephan Andy – but that is another story for another time.

As much as I’ve complained about Ads, it was such a treat to see her and her 6000 new Grammys and to discuss something she is far less skilled at, the world of celebrity and the Holy Grail of awards ceremonies.

Lucky for this year’s race for Best Original Song is a two horse-one batch of nominees race between the two nominated hits from La La Land. I mean sure, in any other year Lin Manuel would be polishing the EGOT label on his future tombstone … but La La Land was a gem celebrating old Hollywood that was also more cerebral than most people give it credit for, meaning it is pretty much unbeatable in this category above all else. And even Adele can see that.

I mean, it is a musical for christ sake – we can ignore that Another Day in the Sun and Someone in the Crowd are infinitely superior songs.

We both agreed that City of Stars is the safest bet for the gong and that a Waffadele Burger is the perfect feed for such robust debate.

I know, I know – a waffle burger is gimmicky … but this one is pure perfection. I mean it is a copycat Big Mac, served on waffles. It is a better McGangbang than the McGangbang and dipping fries into a sundae.

I’d tell you to enjoy but I know there is no getting around it! Now off to greet my fave writer/director … 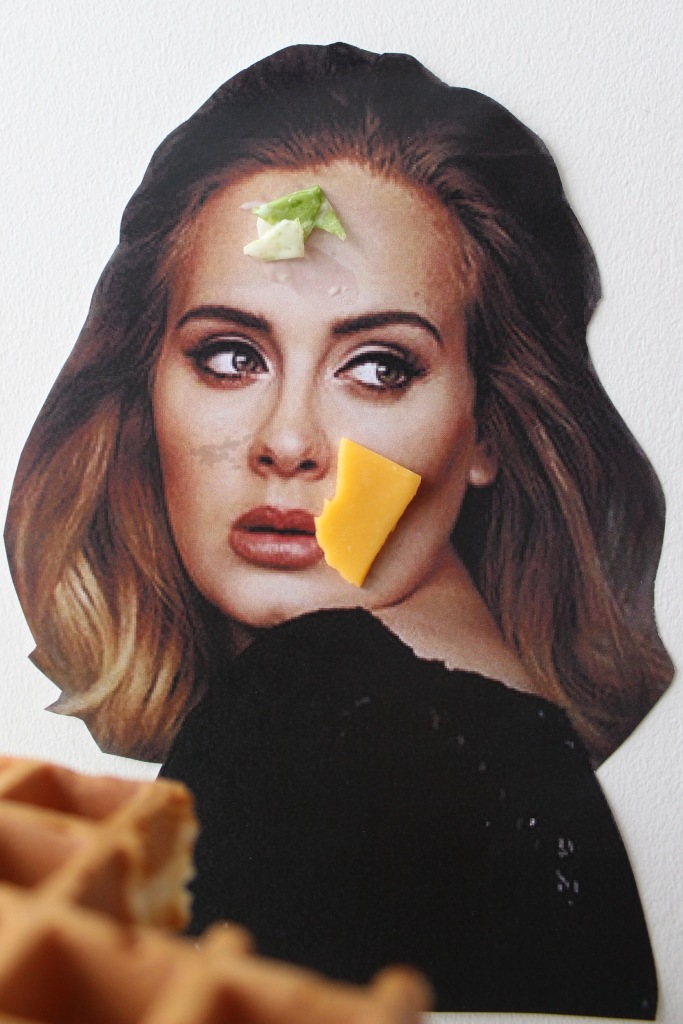 Method
Combine the mayo through garlic powder in a small bowl with a good season, stir and place in the fridge to chill.

Meanwhile squeeze out excess moisture (read: blood) from the mince and transfer to a bowl. Season generously, combine with your hands and shape into eight balls and flatten to make thin patties. Leave to rest while you heat up a large skillet over high heat.

While that is happening, start toasting the waffles in a toaster and transferring to a plate.

When the skillet is nice and hot, reduce heat to medium, brush with some cooking oil and cook the patties for a minute or two each side. Transfer to a plate and repeat until they are done.

To assemble, place a waffle on a plate, smear generously with special sauce, top with a pinch of the reserved chopped onion, add the lettuce, top with a slice of cheese and a pattie, followed by the centre waffle. Then smear with sauce, top with onion, lettuce, a few pickle slices, cheese – because I believe it needs two slices – the pattie and another waffle.

Push down, grab in one hand – if you can, Ads and I have big hands like Donald Trump, obvi – and devour.

One thought on “Waffadele Burger”