Previously on Survivor, Rohan’s junk threw out the clue I assume to make way for my …well, before JoJo declared a merge which was actually an absorbed tribe situation, where Nick was a dick to Jennah Louise, setting up his eventual downfall and Kat, I assume learning from her favourite Resort Report CEO turned on Aganoa filling Craig with some arrogance.

Hopefully this isn’t the pride before his fall.

We made our way over to new Saanapu where Jennah Louise was rightfully feeling pretty screwed, fuelling what I hope will be her comeback storyline.

Returning to Vavau, Kate tried to take over the mantle from Joe, Wigles and Vytas by furthering her game via yoga. Kate, show me your idol in some printed jocks and you get my vote.

After some absorption disguised as a merge rage from Phoebe, everyone started feeling hella XTina circa ‘02 when they saw JoJo and were pumped to get dirrty. Either way, I was sweating as their clothes came off.

There was rubbing, writhing and everything to fill Probst’s mind with smut before Nick’s repeated cock-grazing of Lee lead to a victorious shower. Seriously, I didn’t embellish any of that eroticism. This show is getting, gooooood yo.

I assume it is a spokesmodel feud.

While Rohan was losing friends, Craig went wandering to find the Vavau idol … with the entirety of his tribe. So yeah, not exactly stealth. But it didn’t seem to screw Spencer in Cagayan, so maybe it will work.

After an aggressive storm tore through both camps, Lee soaked his shorts (rather than ours for a change) and Sue was well pissed which I hope blows over as I desperately want her to win. We then arrived at immunity which was my favourite challenge which once resulted in Probst saying my favourite quote of all time, “Malcolm’s pants are now completely off.”

After a hard fought battle – and a beautiful love story between Lee and Rohan in the second and fifth rounds – Saanapu won immunity. But let’s be honest, Kate was the true winner showing her challenge beast side and so were the audience with the copious amounts of man butt in the final round.

Heading back to camp, former front runner Phoebe was feeling pretty dejected thinking she was on the way out while Sue was the dominant force of nature I knew she was and forced the idol information out of Rohan and continued to allow him to dig his hole even further.

Knowing that Rohan had the idol, Vavau made moves to split the vote and flush the idol, then debated turning on Kat while Kat reaffirmed the Rohan split, Phoebe moved to get the idol played on her and the vote turned on Sue leading to my complete and utter confusion as they made their way into tribal council.

After a bold tribal council with Phoebe fighting hard and working on deals during discussions and Andrew dancing around in circles, working on his arrogance and butchering the phrase shooting fish – not ducks – in a barrel, Phoebe played her/Rohan’s idol and saw Rohan voted out by Kat and Kristie.

While I felt for poor Rohan as he made his way into Loser Lodge, I was a little bit happy knowing that Sue has survived. Plus I knew it was close enough to the mud challenge that I could offer to shower my model friend – we met while I briefly worked in casting for a major fashion label … I think you know why I lost my job – without coming off as too lecherous.

Ro being Ro wasn’t angry when he made his way into my loving arms … but that could have something to do with the fact that he could smell my Rohan Maclaren Cheese baking in the oven?

Like Rohan this dish has you salivating – cheesy, comforting and decadent, this pasta bake and its hint of truffle keep you coming … back for more and more. 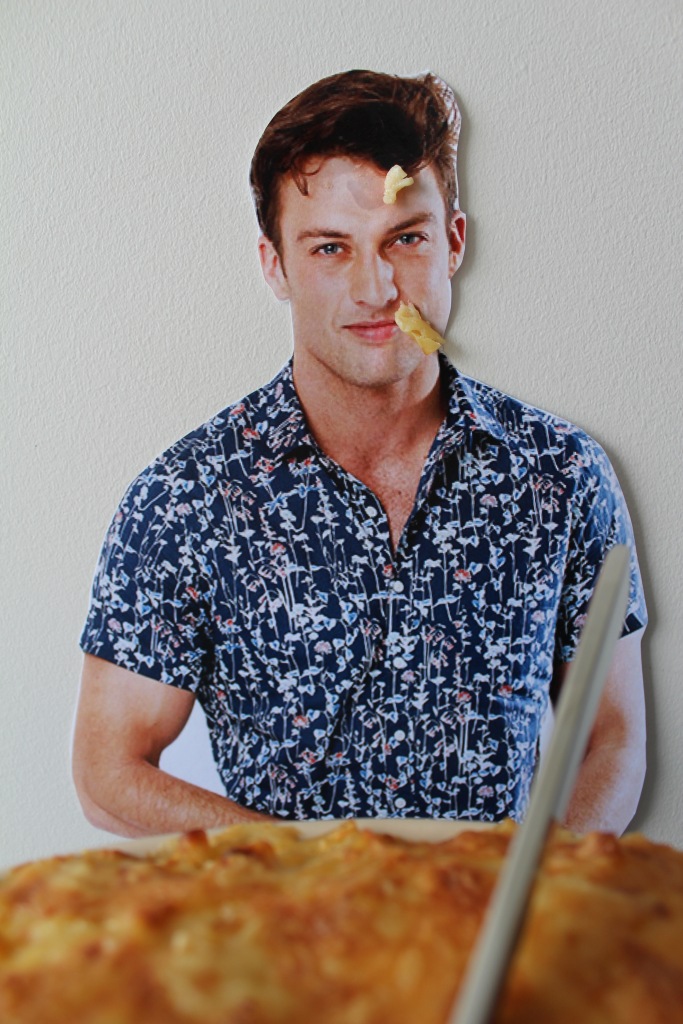 First get cracking by bringing a large saucepan of water to the boil aka hotter than the hot tub with a swimwear model. Salt the water, add the macaroni and cook, stirring often, for just under the packet recommendations. Drain, return to the pot off the heat and stir through the truffle oil.

Remove from the heat again, and stir through a cup of each cheese until smooth, melty and glorious.

Pour the sauce over the macaroni, give a thorough stir and transfer to a medium/large baking dish. Top with the remaining cheese and bake for 30 minutes, or until it is golden and bubbling.

Remove from the oven and allow to stand for 5 minutes, if you can. Garnish with chives and devour.

Yes – no serving, devour. This is single serve if you’ve just been booted.