As we move into the second half of our inaugural Tony Gold celebrations, I knew I had to go with some even bigger Tony Awards legends and there is no one more legendary when it comes to the multi-hatted Harvey Fierstein.

I honestly don’t even know where to start about my dear friend Harvey Fierstein, the man can do just about anything and truly is a Broadway legend. I mean, he’s won Tony’s for acting and Best Play and for writing the books of musical, there aren’t many of my friends that can say they’ve achieved more. Which is a huge part of why we’re friends, as I assume you suspected.

I first met Harve’s through my dear friend Andy Warhol – I was one of his muses – when he came in to audition for his play Pork. While I was ropeable that Andy didn’t hand me the part, I begrudgingly knew that Harves was the better man for the job and instead of tearing him down, hitched my wagon to his for inevitable fame and fortune.

Fun fact: he wrote the roles of Alan and David in the Torch Song Trilogy in honour of our love affair and my childish attitude, respectively.

Given the fact that he can do pretty much anything on Broadway, I decided to wrote the best book of a musical and best production odds, so buckle in. For the book, it seems to be a two horse race between Dear Evan Hansen and Natasha, Pierre & The Great Comet of 1812, the edge I give to the former and Harves gives to the latter. For the plays, we agreed on Six Degrees and of Separation and A Doll’s House, Part 2 taking the gold, with the musical gongs going to Hello, Dolly – never bet against Bette – and Dear Evan Hansen, despite Come from Away taking out the Drama Desk.

Given the conversation was robust, I couldn’t go past whipping up our old favourite post-coital meal, Harvey Fiersteamed Bun.

There is a lot I could say about Harve and my passion for a tempting, hot bun but these are far and away the best ones we want to have in our mouths to devour. I mean, steamed buns are amazing – they even ended my feud with the artist formerly known as Cumberbitch – but have you ever had a mexican themed one? Because they’re amazing. A light, fluffy cornbread enclosing a piping hot chilli and gooey cheese? Sign me the hell up. 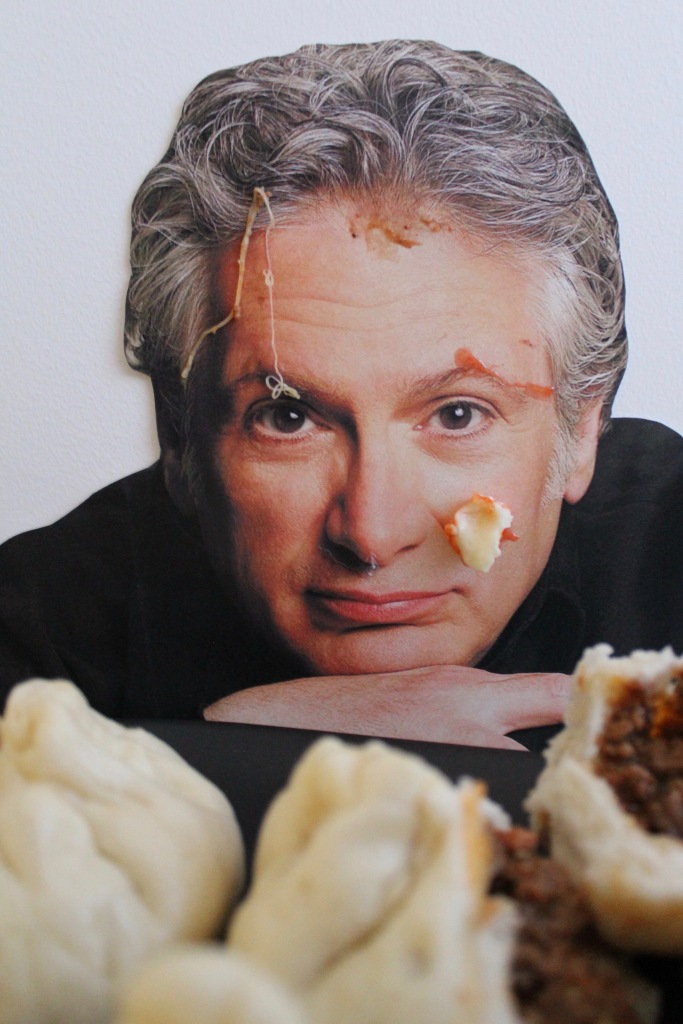 Method
Start out by whipping up the Chilli con Kim Carnes, remove the two cups required and cook a little bit further to get rid of as much liquid as possible. Remove from the heat and allow to cool while you carry on, not necessarily calmly, with the dough.

Combine the yeast and warm water in the large bowl of a stand mixer before adding the flour, cornmeal and cornstarch, stirring with the dough hook to kinda combine / avoid a kitchen resembling an anthrax scare. Place the dough hook in the mixer and mix on the lowest setting. Slowly add the sugar and oil and continue mixing until a smooth ball forms. Remove, cover with a damp cloth and allow to prove for a couple of hours.

As its had a chance to prove itself, add the baking powder and return to the mixer on low for a couple of minutes. At this point it may be looking a bit dry since the cornmeal acts like a sponge, so add a couple of tablespoons to keep it smooth and soft … but not sticky. Nice and simple instructions, no? Once the dough is smooth, cover with the damp cloth again and allow to prove for half an hour.

While the dough is proving, cut out 12, 10-15cm squares of baking paper. Once the dough has proven itself again, punch it back and divide into 12 equal balls. Press each into a 15cm wide disc and place on a piece of baking paper. Place 1-2 tablespoons of filling in the middle of each disc with a pinch of cheese before pulling the edges in to enclose like a bun.

Once the buns are prepared, bring a pot of water to water with a steamer over the top. Once the water is going off like a frog in a sock, add 3-4 buns and steam for 10-15 minutes, or until puffed, fluffy and gorgeous. Repeat the process until they are done.

Once you’re ready, serve with any combination of chilli sauce, sour cream or guacamole and devour.