Previously on Survivor, the Mike and Joe frantically searched for cracks in the alliance of seven. While they were successful in finding an in, it was in know way to their credit, as Ben, Lauren, Devon and Ashley hatched a plan to blindside Ryan and Chrissy and take control. While I’m still confused how inserting someone into the game on day 28 only to blindside them is a power move, farewell JP. We barely knew ye!

Things were hella awkward back at camp after the blindside, with Ben pretending to be upset and Chrissy pretending to be cool with the vote … as her voice got higher and higher with each sentence. Ryan was mildly more successful pretending to be gracious about the blindside, though was still hella pissed about the vote. Though it appears not as personally attacked as Chrissy. In any event, Ben should play the Glenn Close role in the reboot of Fatal Attraction.

Ben went for a walk with Lauren and Ashley to discuss their success under the guise of making nice, while Ryan and Devon got together to clear the air. While Ryan tried to argue the semantics of his idol lie, Devon pretended they were ok despite being completely unmoved.

The next day Devon entered the winner’s edit fray, giving some nice personal content before meeting up with Ben for some breakfast, thankful that after one vote, their majority will be on lock and Ben can come out of the closet. The alliance closet, tragically. In any event, Devon’s cockiness seems far more likeable, making me feel like it won’t bite him in the butt. Yet.

My boy Probst arrived for a spa reward challenge, where the tribes would be split into teams and required to swim to a boat before rowing to the shore, collecting blocks along the way. They then need to use the blocks to push puzzle pieces out of a tunnel before, obvi, building said puzzle. Ashley, Ben, Devon and Joe got out to an early lead before stranding Ben with the second puzzle pieces and allowing Chrissy, Ryan, Mike and Lauren to catch-up. Sadly, that wasn’t enough as Ashley, Ben, Devon and Joe’s brute strength returned their lead while releasing the puzzle pieces, giving them victory before Mike and Chrissy could claw back.

At the reward, Joe was feeling better about his place in the game after surviving the last tribal and getting a shower. Devon’s stocks continued to rise, grateful for a shower … and Ben’s skillful portrayal as a blindsidee scorned. While the boys showered – in separate showers, sadly – Devon and Ashley gloated about the move, with the latter also realising that Ben will need to be legit blindsided soon.

Back at camp Ryan was feeling nervous, pulling Mike aside to try and find some common ground to form an alliance. Poor Mike was feeling super confidence in his new alliance of five – which is made up of three aligned people with two patsies – so quickly shut him down. Sadly Chrissy was having as much luck trying to win Lauren over by starting to discuss strategy on day 28. Chrissy’s mood continued to plummet as the rain rolled in the next day, taking some time alone in the shelter to wallow by herself. Thankfully Mike was on hand with some rice and comfort to perk her up.

Jiffy Pop returned for what looks to be a huge immunity challenge, where they were required to wheel a key through an obstacle course, unlock some puzzle pieces and, wait, build said puzzle. So yeah, not actually that huge. Ben, Devon and Joe got out to an early lead with Chrissy and Ashley close behind. Aka, Mike, Ryan and Lauren are total non-events. Devon was first across with all the puzzle pieces, followed closely by Ashley and Ben. thankfully for everyone else, the puzzle proved extremely difficult allowing Chrissy to catch up and snag immunity, despite everyone trying to cheat off her answers.

The tribe quickly commenced scrambling with the secret final four alliance of Ashley, Ben, Devon and Lauren sneaking away to lock in a vote against Joe. Ben then exited, allowing the three to tell Mike and Joe that the five of them will be splitting the votes between Ben and Ryan. With them busy, Ben joined Chrissy and Ryan to discuss who they should target, tossing up between Devon and Ashley, while Ben encouraged Ryan to save himself by playing his idol. To add a little confusion to the mix, Lauren and Ashley hooked up to discuss the issue of getting rid of Ben. While they agreed he will need to go eventually, they aren’t quite sure if it is the right time. Ashley then took the plan to Devon, who wasn’t convinced that it was a good idea just yet.

At tribal council Cole and JP continued to wear clothes, while Mike seemed pretty happy with himself, as too was Chrissy which makes more sense given she has immunity. Joe started to gloat about successfully taking advantage of the people at the bottom of Ben’s broken alliance, which to reiterate, nobody knows isn’t broken given he continues to get a Meryl-worthy performance. Mike joined in the gloating act, highlighting that neither he nor Joe are very self-aware. Vague talked turned to trusting your alliance and the ebbs and flows of the game before Joe announced that he was the safest he has felt even without an idol, thanks to his alliance. Sadly for him, that trust was misplaced as Ryan needlessly played his idol on himself, allowing the votes to roll in for Ashley before sending Joe out of the game.

What I didn’t mention when filling you in on JP, is that our relationship broke down after he discovered I was the firebug destroying his town all to assemble a life-calendar in my boudoir. I was arrested and since I’m a celeb, quickly put on parole … which is where I met and befriended Joe. While I gave him a decent amount of shit for the way he played the game, Joe is an absolute sweetheart out of the game and I wholeheartedly credit him for turning my life around. And for that, he’ll get aw many vats of my Joe Manngo Chutney whenever he is down. 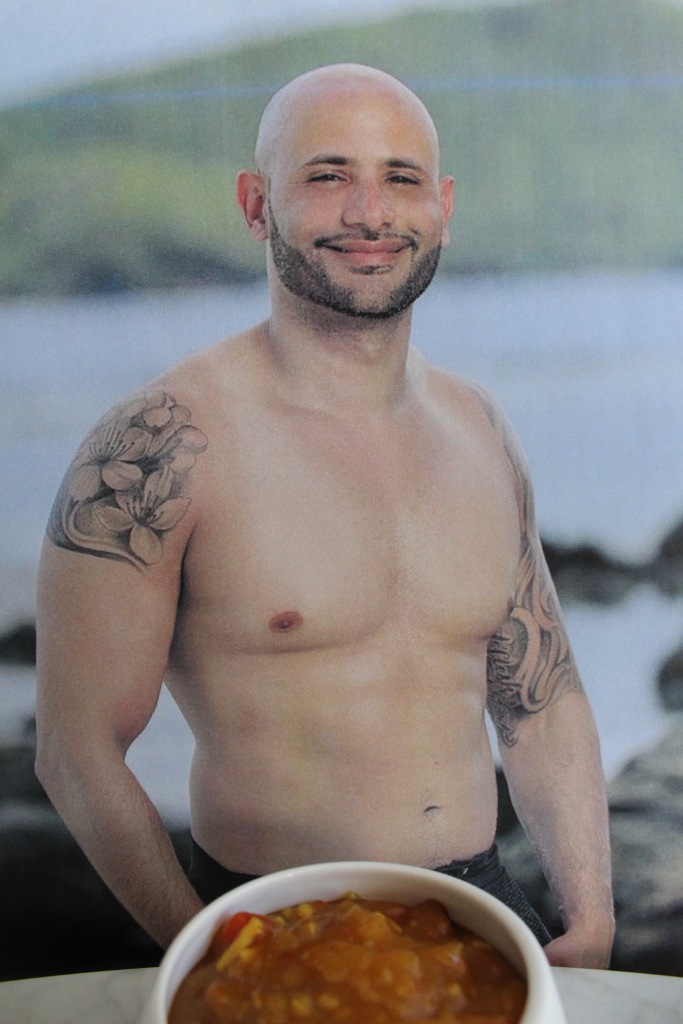 The strong kick of chilli mixed with the hint of curry work perfectly with the sweetness of my juicy, juicy mangoes, leaving you with a condiment you want to drink by the jugful. Which Joe coincidentally does. 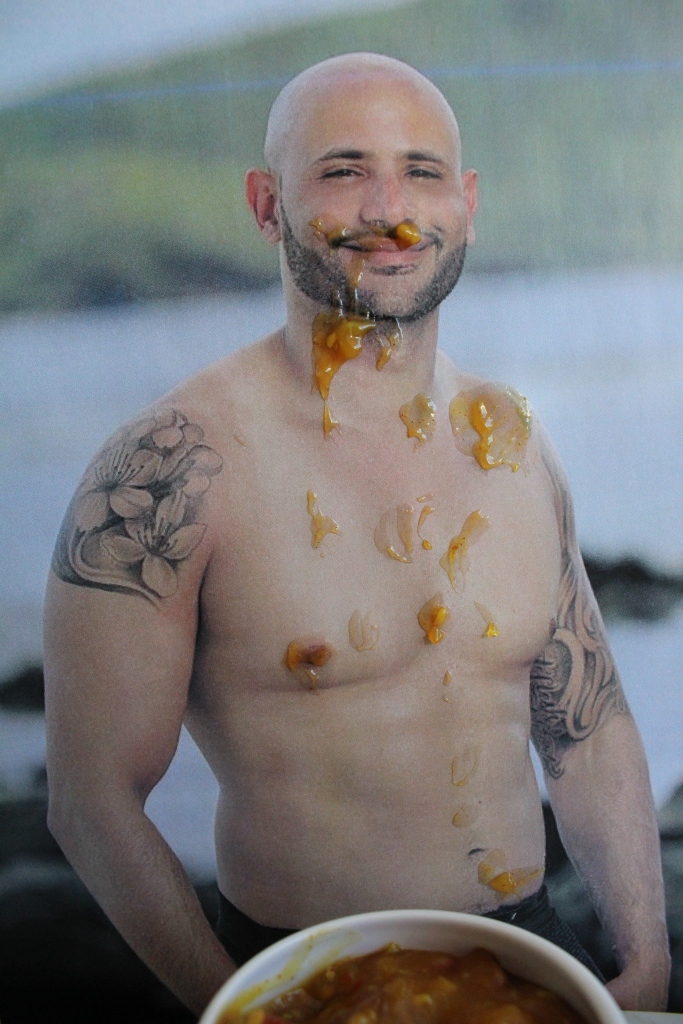 Method
Put the mangoes in a bowl and sprinkle with salt. Cover and leave overnight to rest. In the morning, drain off the juice and rinse the fruit thoroughly.

Combine the apple, garlic, chilli, vinegar, sugar, ginger, cumin, coriander, mixed spice, cloves and sultanas in a large saucepan over a low heat, and cook until the sugar just dissolves.

Add the mangoes, bring to the boil and add simmer for an hour, or until the chutney is thick and syrupy.

Spoon into sterilised jars and seal … or devour immediately with cold meat and sharp cheeses. Or use it in the Jacken Thomas & Avocado Pizza.