Previously on Survivor New Zealand, Chani continued to live on struggle with a massive storm whacking any last shred of hope straight out of them and had Franky on the edge of quitting or life, depending who you ask. Despite winning literally everything Khangkhaw weren’t doing a whole lot better, with both Kaysha and Adam smashed by the reward challenge. Which reminds me, Matt channelled Locky, now he is my favourite and I’d like him to smas … nevermind. Once again Khangkhaw took out immunity – and Brad snatched a hidden immunity idol at the challenge to boot – and sent Chani back to tribal where poor Karla found herself becoming the second boot.

Back at camp Chani were lamenting their losses and vowed not to return to tribal. Well except for JT who was thrilled to be down in numbers so that when they swap, their alliance will be strong and able to bring down the other tribe. While that is the hope for when you’re down in numbers, it is also difficult to pull off when you’re obviously difficult to trust. And since Franky is already finding him trustworthy and he played Tess at the outpost last episode, I don’t see it happening. But surprise me JT, if only because your hat game is strong.

Things still weren’t looking great the next day as Chani struggled to muster any energy and instead waited for advice of a challenge, swap or merge. On the flipside, Zadam was leading Khangkhaw in a bit of a sing-a-long while cleaning up around camp and generally dominating at surviving. Tess tried to convince Dylan to flood out a tarantula nest before talking about how she was out to prove people wrong and show that you don’t need muscles to win. Though then she couldn’t decide if team pink was female or gay guys and I started to worry that she is going to make me sad soon. Though Zadam is still a fan and as such, I will continue to buy into her winner’s edit.

Potentially feeling threatened by my love for Adam, Matty arrived for this week’s reward challenge were each tribe would send two people into battle balancing statues, with the first person to knock their opponents off winning a point for their tribe. First tribe to ten points win a dickload of fishing gear, so Chani desperately need it to stay alive. Thankfully Dave and Eve dominated Zadam and Tara respectively, giving them a 2-0 advantage. Liam continued the winning streak over Josh before Renee just straight up pushed Tess out of the way to score another point. JT’s 80s school teacher look was no match for Brad before Franky beat Lisa, Arun smashed Dylan, Liam beat Josh and destroyed the set, Tara took one back from Tara, as did Brad from Dave before Eve and Arun beat Tess and Adam, leaving Franky to snatch the first victory for Chani over Lisa.

Chani returned to camp elated and got to work fishing to try and give them some energy. Well, except for JT who desperately just wanted to fulfill his life’s dream of possessing a hidden immunity idol. Sadly for him, it was Eve that found the clue tucked away in the fishing net and while she stupidly announced it and shared the clue with everyone else, she technically grabbed the idol and became its owner despite vowing to use it for the best of the tribe. When she eventually found it after a treasure hunt with Renee and Franky, neither of whom trusted her to use it for their advantage. She and JT then caught up about her snatching his dream away before he tried it on and vowed to us that one way or another, it would become his.

Meanwhile Khangkhaw was feeling the burn of their first loss and Kaysha started to bitch and moan about Dylan not listening to the rules. But wait, psych! It was all part of her plan to put some distance between them so people no longer see them as a pair. Which is genius for her except the fact it paints an even biggest target on her closest ally’s back. Distracting themselves from the drama, the tribe – minus Zadam who couldn’t give a fuck – decided to go for a coconut hunt before Dylan disappeared to hunt for an idol and skulk about like Sandra Diaz-Twine to eavesdrop on his tribe. Thankfully it seemed he was only hearing Kaysha bitch about him, which he had approved. Sadly for them though, Matt was starting to think that Kaysha’s rapid 180 was disingenuous and that maybe it was all a ploy.

With the idol firmly in Eve’s pocket – well actually I can only assume that. It could still be around JT’s neck – Franky decided it was high time she started thinking about breaking her alliance with Arun, JT, Dave and Eve and take out the latter, SInce Renee and Liam both work hard and are good in challenges. While Arun seemed receptive to the idea, she was unaware that he was more closely aligned with JT and Eve and ya’ll know this ain’t ending well for the ZM Wildcard. Meanwhile JT and Eve went for a wander to the well, with JT using the time to continue the push to snatch the idol. Though that was quickly replaced by Eve deciding she needs to target Franky should they return to tribal.

Both tribes drew straws to see who should go to The Outpost, with Eve continuing her hot streak and representing Chani – and taking her idol JIC it is a random tribe swap – and Kaysha going for Khangkhaw much to Dylan and Tess’ chagrin, the latter who was concerned about her lying about her adventures at The Outpost … which she did last week. Anyway, Eve and Kaysha met Matt to discover they’d be competing in the Malcolm Freberg memorial challenge from Philippines, where they needed to balance a ball on an ever expanding stick. It was for the contents of a child’s birthday party – I assume cheezels and BBQ thins included – so the girls were V keen to snatch the win / crack-out on the sugar. Also – calling soft drink fizzy? Amazing. Oh FYI, the challenge was extremely boring from the play-by-play perspective, so Kaysha defeated Eve just after the third round kicked off leading to Kaysha breaking into tears before Matt even told her the reward was for her and her alone and gave her the chance to have a chat with Eve to try and get a handle on the tribal dynamics. While they both tried to get some information out of each other, they gave tribal council responses and it was kinda dull. I mean, where are the damn trainwrecks?!

While Kaysha was away from camp Dylan continued to be public enemy number one, with Zadam and Brad annoyed by his sulking. Though given everyone is hating on him, I kind of feel like it is the only thing he can do. Thankfully Kaysha returned before any drama exploded and quickly told the tribe the truth about her experience on the outpost and how she smashed a shit tonne of food. Which neither Adam or Tess believed, turning it into an inquisition.

The next day the tribe reconvened for this week’s immunity challenge where they would be required to release puzzle wheels tethered underwater one at a time – from the deepest to the shallowest – before solving said puzzle. Matt rubbed a bit of salt in Chani’s wounds talking about their passion for tribal while Dylan tried to pretend he wasn’t on the bottom of Khangkhaw, saying they all just wanted another couple of days together. Matt and Franky were neck and neck, however Franky bombed getting out of the water meaning Josh had already secured the second piece for Khangkhaw before Renee had even gotten in the drink for Chani. She then swallowed water and made a quick escape before Matt and Josh dominated for Khangkhaw and Chani couldn’t even get the second. While Renee eventually got a second wheel, it was all for nought as Khangkhaw got all the puzzle pieces, solved the puzzle and snagged themselves immunity. Again.

Back at camp the mood was decidedly somber with everyone feeling shitty about bombing the challenge and having to get rid of yet another person. Renee decided Eve needed to go to flush out the idol before Eve and JT tried to convince Dave to join them in taking out Franky, which he didn’t want. While Franky assumed she had JT and Arun’s loyalty, she still got to work scrambling with Renee to get rid of Eve. Dave was feeling completely lost, given he trusts Franky more and the fact she is stronger in challenges. Which they desperately need right now. Dave tried to help Franky get herself out of her predicament, with her approaching everyone to try and find an out before pulling Liam and Arun aside on the walk to tribal to try and bamboozle her way to safety.

By the time they arrived at tribal council I was hella confused, particularly after they all admitted to being shocked to have lost the challenge. Which was a complete blowout. Arun shared that the last challenge wouldn’t impact his vote tonight before Franky admitted to being extremely nervous. JT interjected to share his vote was decided by who he likes and trusts, before Dave tried and failed to deny the existence of an alliance. The boys then got sidelined by receiving – swoon – before Matt addressed the hidden immunity idol, which they quickly told him was not actually a secret. Matt continued to needle away at them to try and find out who was in danger though failed, before sending them off to vote. Once again for the strongest remaining female, Franky, and sending her out of the game as the third boot.

While Franky was feeling down when she arrived at Loser Lodge, her mood quickly improved upon discovering her favourite journo school – seriously, what is with all the journo connections this year? – lecturer was waiting in the wings. Despite overplaying and trusting the wrong people – looking at you Arun – the last episode, she had been playing a good, scrappy game that can only be played by someone on a flailing tribe. I then listed all the iconic victims of a terrible tribe – Gina from Marquesas, Angie from Palau, Liz from Samoa, Zane from Philippines etc. – and she quickly perked up. Which coincidentally is when I pulled out my Francauliflower Mash. 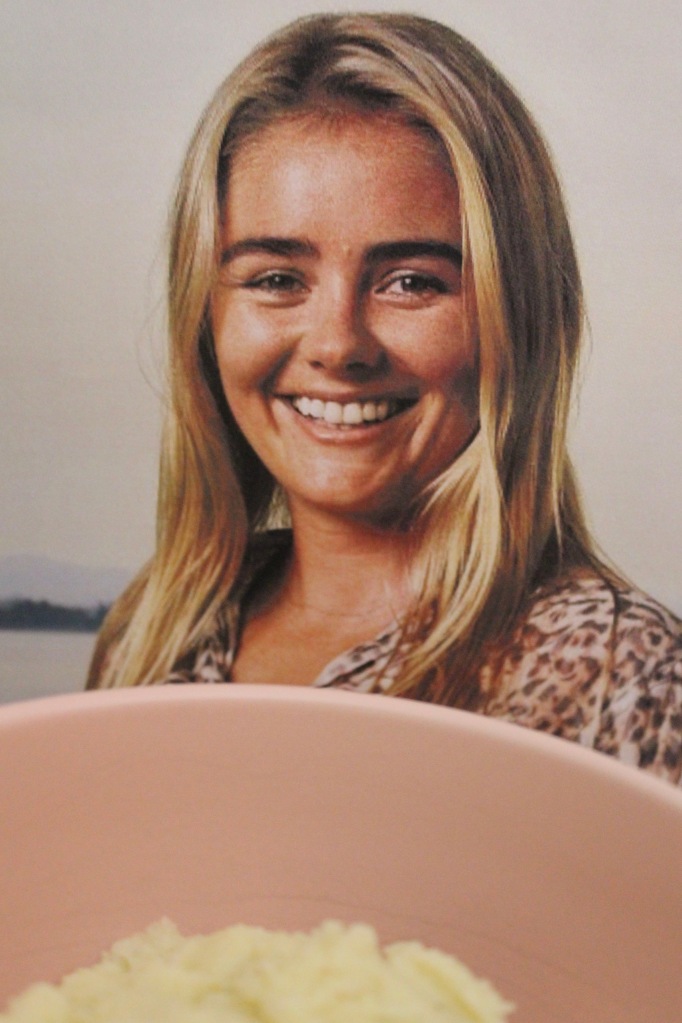 I was scared that this healthier version of mash wouldn’t go down well with our third boot, but damn was I wrong. Though given how amazing this tastes, I shouldn’t have doubted it. Light, creamy and velvety smooth, this is the tastiest winter warmer that won’t make you feel guilty.

Something something summer bodies … is this what I’ve become?

Method
Cook the cauliflower in a steamer for five-ten minutes, or until tender and cooked through.

Transfer to a bowl with the butter, milk and salt and pepper, and blitz with a stick blender until smooth. Stir through the parmesan cheese and serve immediately before, you guessed it, you devour.