Previously on Survivor, Tavua continued to dominate immunity challenges, which was very lucky for Troyzan. Unluckily for Mana, Debbie went from lovable-nuts to scary after missing out on sandwiches while over at Nuku J.T. and Aubry’s plot to boot Michaela backfired on the former, sending him out of the game with an idol in his pocket.

Oh and Sandra stole the sugar, blamed it on her closest ally and still came out clean.

Back at camp Aubry gave her best Adam Klein impression while congratulating the people that blindsided her. Despite it being fairly obvious why it was J.T. over her, Aubry asked them why she was saved before correctly identifying that Sandra was running things and is the best player out there, royally screwing her in the process.

Over at Mana, Tai decided to make the most of last episode’s hidden immunity idol clue and get his wood wet under the cover of darkness. Turns out, that little process gives you a happy ending. What a damn surprise.

Clearly getting hot and bothered, Jiffy Pop arrived for what the tribes assumed was an immunity challenge which was instead another swap were Sandra and Varner became the latest people to be completely screwed by the game, ending up on new-Nuku with Ozzy, Sarah, Andrea, Zeke and Tai.

Everyone else but Debbie ended up on new-Mana, while Deb found herself without a tribe and a pony, heading to exile island until one of the other tribes boots someone to make room for her.

Over at new Nuku, Sandra and Varner did their best to ingratiate themselves to their new tribe members. Sandra being Sandra, remained calm and was sure that she would be able to find her feet.

And just like that, Zeke and Ozzy went for a walk to reaffirm the need to get rid of Sandra, before rallying their fellow ex-Tavuans and lining up a decoy boot in Tai. Which given his past will not go well if he finds out, despite knowing Sandra is the biggest threat.

Feeling uneasy, Tai approached the Nuku well hoping to find their hidden immunity idol … which he did, bringing his total for the episode to two and the season to three.

Why couldn’t it be Sandra?

We then caught up with Debbie who was approaching what she thought was Exile Island and instead landed on a luxury yacht complete with feast and – oh wait, here is the shitty part – Cochran to provide advice … and thankfully something useful in an advantage.

Hatred aside, this is a crazy showmance I can get behind. And I assume, so can Debbie who is more excited to see him than the presidents and prime ministers she has, of course, also met.

Debbie then told her potential new boyfriend about how confident she was and ragged on Brad ‘fuck you’ Culpepper, before Cochran presented her with – what I assumed was an engagement ring – the options for her advantage. She of course elected the worst advantage, the extra vote – which has booted its holder every time it has been played before – rather than an advantage for her tribe at the next immunity challenge or my personal favourite, a kit to build a fake immunity idol.

Sadly a devious revenge plot where she gives a legit looking fake idol to Brad to boot him will not come to fruition.

The next day Zeke and Varner connected by the beach where Varner shared how desperately he wanted to make the jury on his third game. Zeke, knowing he should start making Sandra and Varner relax, told Varner how much they wanted Tai out of the game. The entire conversation made Sandra anxious … but Sandra is smarter than all players, and knew something wasn’t adding up.

Not wanting to leave us hanging too long, Jiffy Pop returned for the first immunity challenge as new tribes where they were required to get wet, pull themselves off … a platform and over monkey bars before running to shore and placing their piece(s) in a cart and pulling them into shore.

Obviously it ended with a puzzle.

Mana got out to any early lead, which despite Varner’s best efforts to pull up a load, never went away, sending Mana to tribal council.

Back at camp, Zeke reconfirmed the need to get rid of Sandra, while Varner was feeling confident it was Tai. Again, Sandra’s superior intuition shone as she felt nervous – for the first time in three seasons – and approached Ozzy, Sarah, Zeke and Andrea about booting Tai to avoid a Kaôh Rōng kaôh-lition.

While Sarah and Ozzy weren’t wanting to budge on the Sandra vote, they acknowledged how persuasive and right she is, and that they do need to break up the trio of Tai-Aubry-Debbie.

On the other end of the spectrum, Tai then approached Varner to tell him that Sandra was indeed the target … allowing Sandra time to come up with a plan, which is never a good thing.

With that, they arrived at tribal where Andrea announced that they would continue in the tradition of the season – like All Stars before it – to boot the biggest threat, while Ozzy spoke to the back of Sandra’s head about the positives of keeping a bigger threat as a shield before Sandra announced that she was confident it was her as no one was talking to her.

This spooked Tai … who then commenced talking in circles, confusing himself and making the rest of his original, original Nuku tribemates. Sarah then mentioned being open to a couple of options, spooking Tai even more before Sandra said that she’d vote for whoever he wanted her to. Before he whispered a name to her.

He then gave Varner the same name, to which Varner mentioned they still needed another person. The rest of the tribe wanted the goss … so Tai then announced that he was now considering Ozzy, spooking Ozzy, Zeke, Sarah and Andrea, who then commenced their own whispering.

After some back and forth and everyone being confused, they threw their hands in the air and decided to just vote … which sadly – and I hate that I’m even typing it and never assumed I would have to – resulted in my dear friend, sass-monster and greatest player of all time Sandra Diaz-Twine being voted out for the first time.

Thank fuck those fuckers fucking applauded her on her way out the door. The stupid fucks. The Queen is dead, long live … the D-list returnees rounding out the cast?

While I was fuming by the time she arrived at Loser Lodge, Sandra took her first ever boot in her stride … until I convinced her to break into both camps while they were at the next challenge and burn their camps to the ground. FYI, that is why they were crying in the next episode preview.

As you know, I met Sandra when I was her server at Outback Steakhouse and we quickly bonded over being fiery, sassy and persuasive. While she has never been able to get me out there as a contestant – she tried for Blood vs. Water but Aras got jealous – I was scheduled to appear as her loved one, which is probably more of a tragedy than seeing the Queen and Malcolm felled within a fortnight.

Obviously that meant I was in desperate need of some comfort food, meaning I had to whip out my famous Quesandillaz-Twine.

An ode to my girl’s winning ways, these quesadillas are the absolute best – spicy, cheesy and with a good whack of chilli, the crunch in your mouth and go a long way to help even the sharpest of pain. 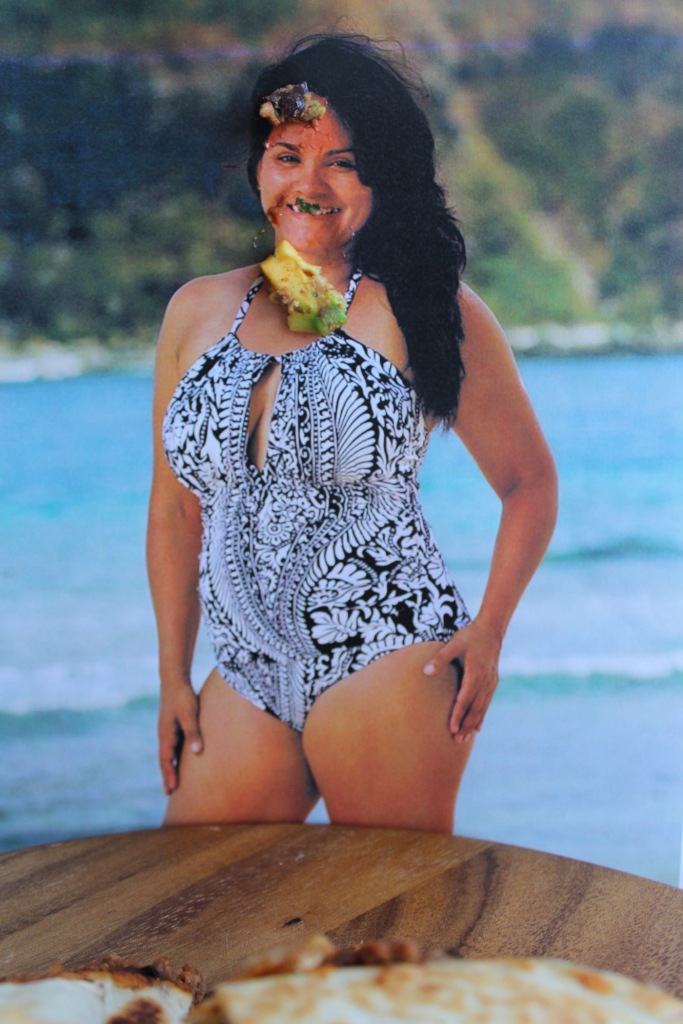 Quesandillaz-Twine
Serves: 1 first-time boot and her irate firebug of a bestie.

Method
Brown the mince in a large skillet over medium heat, breaking-up with the wooden spoon as you go. Add the garlic, onions and a good whack of salt and pepper and  cook for a couple of minutes, or until the onion is just translucent. Add the spices and cook for a minute, before adding the tomatoes, black beans and paste. Reduce heat to low and simmer for about twenty minutes, or until the liquid is pretty much gone.  Remove from the heat and stir through the avocado and coriander.

When you’re ready to devour, heat a large clean skillet over medium heat and add a lug of oil. Place a tortilla in the pan, sprinkle half with cheese, top with the mixture and more cheese, because this is comfort food. Fold the tortilla over to form a semicircle, pressing down on the quesadilla to set. Flip once, cooking a couple of minutes each side. Repeat the process until the mixture or tortillas run out, I don’t mind which.

Cut the quesadillas into wedges – because you don’t need to feel guilty if the food is hand-sized – and serve with a squeeze of lime juice, a dollop of sour cream and, of course, hot sauce.

Devour, in honour of Sandra.