Like David Silver / B.A.G., poor Steve Sanders / Ian Ziering was not the guy you had plastered over your wall, but like a fine wine that man aged into the beautiful Chippendale / shark slayer that I am lucky enough to call my friend.

While I obviously tried to woo Ian countless times on the set of 90210, our relationship never became a fully fledged affair which, I hate to admit, did wonders for our relationship. That being said, that realisation won’t stop my lecherous behaviour with my beautiful friends – sorry Skarsy!

Despite what some members of the D-list would have you believe, Ian is an absolute sweetheart and is every bit as kind and determined as the national treasure he portrays in the Sharknado franchise.

I first met Ian in the late 80s when he was auditioning for a guest stint on Married … with Children before the ugliness of my own creating. Knowing that he had the perfect combination of confidence, charm and uniqueness, I snatched him away from the show and gave him the star making role of S squared.

Give the runaway success of the critical maligned Sharknado masterpieces, Ian has been super busy … and sadly thanks to my ongoing feud with slash the restraining order Tara Reid has out against me, I cannot visit him on set. Thankfully he was able to drop by despite of his busy shark dropping schedule to celebrate the pop culture anniversary to trigger Annelie’s memory.

Obviously that calls for my Pie-an Ziering. 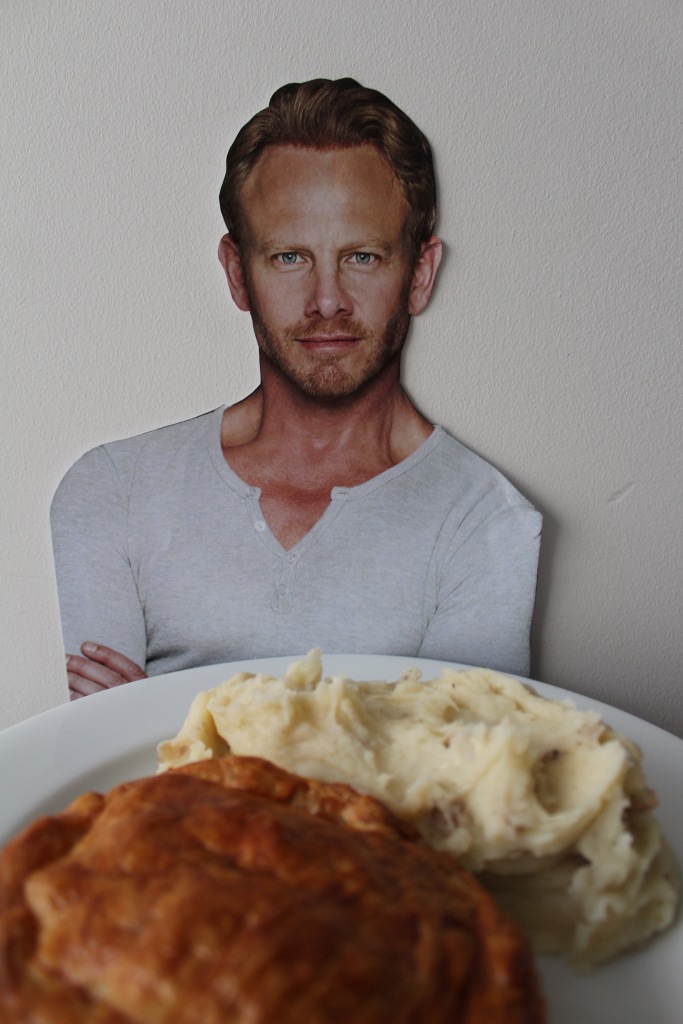 Pies are in my top fifteen comfort food – probably sitting at around fourth. Add in two of my other faves, cheese and bacon, and you’ve got yourself a party worthy of Steve Sanders / a Chippendale / a shark slayer / someone that feuds with Brandi Glanville.

While most cheese and bacon pies are something you devour with equal parts shame and joy, these babies, with their salt streaky bacon and sharp blue cheese bring you no shame and are just so damn good.

They are also a little bit posh. Like Sanders Manor or stripping in Vegas – enjoy!

Method
Heat the oil in a large pan, over medium-high heat. When as hot as Ian’s Vegas outfit, reduce the heat and add the onions and garlic and sweat for a couple of minutes. When they are fragrant and translucent, add the celery, carrot, beef and bacon, stirring to break up the mince as it starts to brown.

When the meat is cooked, add the flour and give a good stir. Then add the tomatoes, stock, tomato paste and worcestershire sauce, stir and simmer half-covered for about 20 minutes, stirring a couple of times.

Remove from the heat and allow to cool for an hour or two.

Preheat oven to 180°C and remove the pastry from the freezer (I was lazy and there is no shame – puff is a total bitch) to defrost.

When the pastry is ready, divide each sheet into four equal square. Press the shortcrust into individual pie moulds (about the size of the circumference of a fist … probably should have mentioned that sooner). Spoon the mixture equally amongst the lined moulds, crumble the blue cheese evenly over the top and fold over any shortcrust excess. Top with the squares of puff, pressing at the edges to seal the pie and crimp any excess pastry around the edges. I mean, why waste it?

Whisk the egg in a mug and brush the tops of the pies. Give them a stab in the top for steam to escape, place the pie moulds on a lined baking tray (simply for ease of getting them in and out of the oven) and bake for 20 minutes, or until golden and crisp.