Don’t you hate a tease?

I mean, I know I dragged Con out for a catch-up to give me the goss about her Nashville departure and then gloated about it to you, but since I can’t actually share said spoilers with you I’ve acted like a tease, so I’m sorry. Kind of.

Either way, you’re just going to have to move on, ok?

I first met Con in the late 80s while she was studying at the Beijing Normal University. I was in the midst of yet another of my educational institution scams but abandoned the grifting to form a friendship with Con and Kirsten Gillibrand.

Fun fact, it was I that pushed for Con to get into acting and after she graduated we moved to New York, where she studied theatre and I studied the male form in the meat packing district.

After falling out briefly in the early 90s, I won her back over after recommending her to my dear friend Michael J. Fox for a role in Spin City and I’m very proud to say that we’ve been trouble free ever since.

Con was exhausted when she arrived – which was to be expected after I pulled her off set after an all night shoot – but knew that my potential Rayna-less induced panic couldn’t be quelled by anything but time with her.

Oh and a batch of my Pumpkin and Baconnie Britton Muffins.

You could be forgiven for assuming that I’m a huge fan of the muff, given my penchant for posting recipes this week … but there is truly nothing Con and I would rather share. Salty, sweet and earthy, these muffs are wholly satisfying as a quick breakfast, light snack or full meal if you down the entire batch. 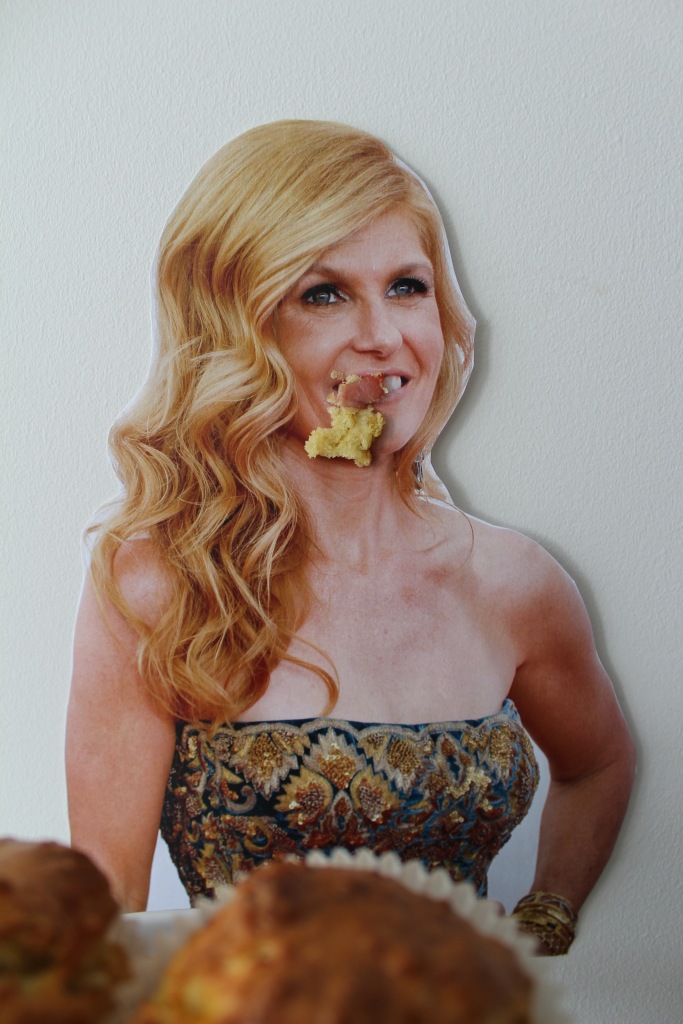 Method
Preheat your oven to 180ºC.

Place the pumpkin on a lined baking tray, drizzle with olive oil and bake for about 20 minutes, or until soft and starting to caramelised. Remove from the oven, keeping it on, and cool.

Meanwhile, heat a small frying pan over medium heat and cook the bacon, stirring, until crisp and brown. Remove from heat and allow to cool.

When everything is getting hella chilled, combine flour, bakings powder and soda, salt and pepper together in a large mixing bowl. In another bowl, give the eggs a good whisk before adding the rosemary, oil and milk. Fold the wet ingredients throw the dry and then fold through the pumpkin, bacon and feta.

Divide the mixture evenly amongst a lined muffin tray and bake in the oven for about 20 minutes, or until an inserted skewer comes out clean.