She better be the first – and only – five time player.

Not wanting to remind us of another painful Cirie exit, Probst returned for the second immunity of the night – the classic dropping balls, balancing them on your hard rods and guiding them through tight holes. Aubry and Troyzan struggled dearly while Brad and Sarah took an early lead. Sarah choked at the last minute of the first run, giving Brad a clear outright lead … from which no one else could catch-up, giving him his fourth individual immunity of the season.

With Brad immune, Aubry was particularly scared given he has zero interest in ever working with her. Confirming her fears, Brad felt victory was in sight and quickly locked in the Aubry vote with Troyzan and Brad.

Aubry tried to work over Tai and Sarah, knowing that Brad was dragging Troyzan to the end as a goat no matter what. Sarah pulled Tai aside to see whether she could trust him again, trepidatiously asking what they should do … with even Tai locking in the vote against Aubry.

Tai then joined Brad in the hammock, where Brad continued to bully him saying that he had no choice and had to vote with him no matter what for the rest of the game. This spooked Tai, who returned to Sarah and confirmed that they should get of Brad’s right hand Troyzan.

We returned to tribal to be reminded that Cirie was eliminated by default, breaking hearts globally.

Probst got his man-boner out to gush over Brad’s immunity run, with Troyzan hopefully he could snag a win the next time. As expected, Aubry wasn’t feeling confident … but boy did she try to convince Sarah and Tai to boot Troyzan and free up another seat at the final tribal. Sarah tellingly said that Aubry’s pitch was great, if that is what is best for all of them. Everyone but Troyzan was feeling concerned about who they could beat in the final, which is crazy since he is the least likely to win. Sadly Aubry’s pitch fell on deaf ears – or at least ones that didn’t have interests that align with hers – as she found herself booted from the game in fifth place.

Hey – at least she actually got votes before getting her torch snuffed, I guess?

As you know, Aubs and I attended Brown with Summer Roberts, and the three off us have been the best of friends ever since. Thankfully this post-boot catch-up was less heartbreaking than our last, given that she was robbed the last time and this one I’m surprised she stayed as long as she did with as large (and as recent) a target as she did.

I’m even more thankful that Aubs is so easily pleased by any food on offer – coleslaw, anyone – because it means that she completely goes nuts on our dates, particularly if it means she gets Aubry Braccos Vin.

Straight up, there is bacon, chicken, mushroom and red wine – do you need me to say anything more? 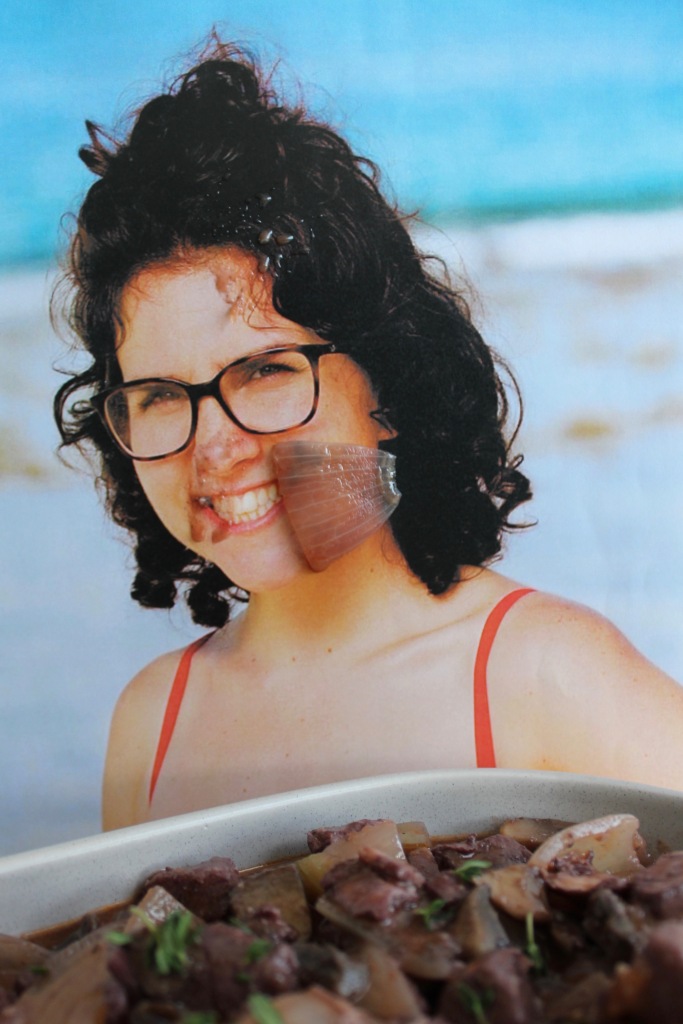 Method
Start by heating a lug of olive oil in a large pot over medium heat, add the bacon and cook for a couple of minutes. Add the chicken and cook for a further ten minutes, or until sealed on the outside. Add the Cognac, let it bubble up and stir for a few minutes. You could light the cognac and let it burn off the alcohol, but I’m scared of fire and would totally lose the final four tie-breaker.

Add a good whack of salt and pepper, the bay leaf, thyme and onions, stir and cook for a further fifteen minutes. Sprinkle in the flour while stirring and cook for a minute or so before adding the wine, stock, garlic and tomato paste to the pan. Bring pot to the boil, reduce heat to low, cover and cook for about half an hour, stirring as you see fit.

Add the mushrooms, stir and cook for a further fifteen minutes, or until soft and glorious.

Remove from the heat and serve immediately on a bed of mashed potatoes, or with thick chunks of crusty bread.