With Cirie, Aubry and Tai swiftly ejected from the finale, Cirie under tragic circumstances, we opened up on day 39 with Troyzan sharing a touching story about dreaming of this moment from seeing the very first episode. If only we’d seen more of him this season, I would have shared his confidence.

They got to work whipping up the finale breakfast with Sarah proud of how she has played the game, hoping that the jury would reward her gameplay and her officer-esque honesty at final tribal.

Brad was feeling very confident, sure that he could put his lawyer skills to use and convince the jury to award him the money.

We quickly returned to tribal where the jury looked as disappointed with the final three as I was – I mean, it could have been Sandra, Cirie and Malcolm for fucks sake. Given that this is game changers, Jeff announced one final twist in the game – changing the jury format of the game to allow a more open dialogue between the jury and the finalists.

Zeke was quick to start the dialogue, praising Sarah for turning on him and then returning to tribal every night wearing his jacket AND turning on Sierra while still being able to convince her to hand over the legacy advantage. He then volunteered as tribute for her and this is suddenly the Hunger Games … which kinda makes sense.

Andrea also praised Sarah before breaking down because Sarah had hurt her and she wasn’t sure if she could move past it and feel good about voting for her. Sarah said that she valued all of their relationships, earning laughs from Ozzy and Debbie who couldn’t trust a word she said before volunteering as Brad’s tribute, to champion his victory based solely on challenge performance.

Cirie quickly pointed out that they booted Sierra as she was the brains of Brad and Troy’s operation and without her, assumed they’d wander around bumping into each other. He was obviously very quick to outline that he was in fact responsible for assembling the alliances.

Michaela joined the fray to test Brad on his personal connection to her, highlighting a major flaw in his social game. On the flipside, Andrea and Tai then asked Sarah how she felt about building those relationships for the sole purpose of taking her out. Aubry quickly directed the question to where it needed to go, allowing Sarah to knock her answer out of the park.

Obviously that upset Debbie, with her vowing to vote for Brad. That in turn earned Michaela’s frustration, with her highlighting that it is just a game and they need to get over their hurt feelings. She then threw shade at Troyzan, asking what the hell he even did in the game. That lead to everyone in the jury jumping on board to berate his lack of gameplay.

Andrea was quick to point out that Brad wasn’t very good at forming relationships with people that weren’t a part of his inner circle. Brad tried to defend himself, before Tai cut him off and told him that he clearly has no idea how he comes across to others. Hali then jumped in and the dear law student, schooled the lawyer.

Debbie then added that he was virial and full of testosterone.

Zeke jumped in to point out that Sarah voted correctly all the time because she was always aware of what was going on, while the others did not.

Brad’s tribute from district 7, Ozzy, jumped in to once again praise Brad’s challenge prowess and tell people that that clearly means he deserves the win. Debbie again agreed, before Sarah cut in to point out that he was a professional athlete and kind of had a leg up. Brad tried to cut back in before Michaela told him to shut-it-down and let her finish.

That allowed Sarah to point out more ways she owned the game, manoeuvring around the technicality of voting out Sierra without voting for her and snatching the advantage from under Michaela’s feet while everyone was distracted by Cirie’s balance beam triumph.

Brad gave his last ditch plea, relying pretty much on winning immunities and being a neat guy and helping out at camp. Sarah simply implored them to vote for the best player who controlled every vote, rather than with their hurt feelings. Defeated, Troyzan simply thanked them for being a part of the journey because it meant a lot to him.

With that, they went to vote with Michaela announcing that anyone that didn’t vote for Sarah is a bitter Betty. Ozzy hoped that Brad could do what he couldn’t. Zeke was honour to vote for his girl Sarah and Debbie obviously voted for Brad, hoping that just once good guys – like the guy she screamed at pre-merge – could finish first just once. With that the jury voted, crowning Sarah the sole Survivor and Brad the second second-place Culpepper, and Troyzan as predicted the zero votes third place finisher.

While Troyzan’s game wasn’t very showy, he was far more likeable than his first go-around and that in itself is a win. I mean, I’ve always known that he is a kind, friendly soul as one of his dearest friend – I forced him into taking my photo in swimsuits. He was disappointed when he exited the game, but quickly perked up with a little bit of love from his friend and a big ole Troyzanella Robertson. 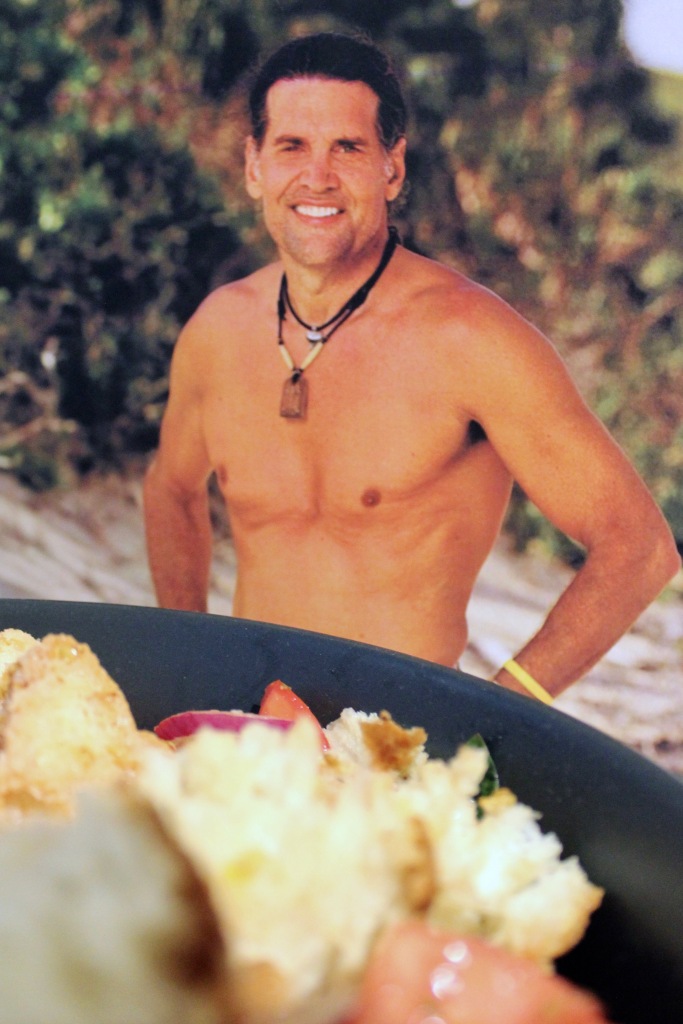 There is nothing more comforting than bread and as such, I knew that this is all that he would ever need to move on from his third place finish. Plus … he knew it was coming since he was on the ballot for Second Chances.

All that aside, this is delicious – fragrant, sweet … and bread. There is damn bread, case closed, it is perfect. Enjoy!

Method
Place the tomatoes in a bowl with a good whack of salt and pepper, and toss to combine.

Add the onion, garlic, capsicum, basil, and a good lug of both the champagne vinegar and the olive oil, to taste. Again, toss … you know I love a toss.