Previously – slash a minute ago – on Survivor, it became exceedingly more obvious that Sarah was sliding her way to victory, despite Cirie’s killer display. While everyone was against Brad for the entire episode, Andrea stuck her neck out one time too many and found herself sent to the jury.

We arrived back at camp where Aubry apologised to Brad for being the only person remaining that voted for him last tribal. She then acknowledged the elephant in the room, that if you align with her you end up voted out … or near death. She then broke down about having had such a rollercoaster day what with winning immunity and being blindsided, before winning Tai’s affection back and making Cirie wary of Tai’s social game.

Probst quickly returned for the second immunity challenge of the episode, the Darrah Johnson-Shane Powers memorial pour-water-in-the-hole-to-float-a-key-high-enough-to-retrieve-it. Don’t blame me for the title, I was experiencing PTSD by proxy for Cirie.

Michaela got out to a quick lead, followed closely by Troyzan, Aubry and Brad, who made quick work using the key to unlock their puzzle pieces. Given how confusing the puzzle was, Sarah, Tai and Cirie all caught up before Brad found a hole that he couldn’t fill. Michaela thought she had it, which she didn’t before kicking the puzzle … giving enough time for Brad to fill that hole and snatch immunity.

Brad then celebrated and / or through a tantrum, almost channelling Mr. This-Is-My-Island, Troyzan.

Back at camp the Troyzan and Tai were feeling uncomfortable, since the target was immune … despite both of them being in possession of an idol, or two if you’re Tai. Tai approached Aubry about needing to make some moves if they are going to make it to the end, both agreeing that Sarah is currently the one to beat.

Aubry then told Cirie, who went straight back to Sarah who refused to believe that Aubry was telling the truth. Wanting to solidify her loyalty, Sarah decided to give up the extra vote advantage to Cirie. Cirie, being the crafty kween that she is, debating the merits on hanging on to it, or playing it despite the fact Sarah didn’t want to, to protect Sarah from herself and Tai.

Cirie then clued Michaela in on what was happening, with both of them agreeing that Cirie needed to use Sarah’s vote steal to steal Sarah’s own vote to take out Tai … by lulling him into a false sense of security to not play an idol by saying she is doing it to save him. This is some next level inception bullshit right here and if she pulls it off, she is the first in line to Sandra’s throne in the line of procession.

Giving future players a masterclass on how to manipulate people, Cirie pulled Tai aside and played him like a fiddle. I mean, the voice quivering, the panic, the concern?! I love Cirie.

We then arrived at tribal council where Sarah spoke about the mad scrambling that occurred post challenge. Cirie and Brad agreed that everyone was lying to someone and that they need to cut through that, to which Michaela disagreed. Tai then acknowledged that he always gives people the benefit of the doubt and that it could lead to his downfall.

Troyzan sounded like he’s been hurt one too many times in the game, which after being schooled by Kim I assume he has. Michaela then brought up the ‘we’ again before we headed off to vote … but wait, Cirie pulled out the vote steal! Sadly for her, she didn’t read the fine print saying that it could not be transferred.

She was then chastised by Probst and Sarah, for outing the fact she was going to make a huge move but actually couldn’t. And as has become the tradition of Game Changers, Sarah then whispered something in Tai’s ear, before Cirie pulled Sarah aside to tell her she was trying to use it to save her, which Michaela jumped up to agree with. Troyzan then tried to eavesdrop, earning the wrath of Michaela who did not have time for his shit.

Aubry then joined the fray and things started to calm down and everyone returned to their seats … until Sarah got back up to  talk to Tai, with Cirie whispering in the other ear. Cirie then went to Michaela, while Tai went back to talking to Sarah … before the latter decided to just use the advantage, take Tai’s vote and get this over with.

Despite snatching Tai’s vote, Sarah didn’t join Aubry and Michaela in voting out Tai, instead joining Brad and Troyzan to blindside Michaela. While it wasn’t as exciting as her previous exit, the tribal build up was even more exciting and she ended with you do you, boo … which is amazing.

Make no mistake, Michaela is a total sass queen … but she was feeling a little bit salty, having been booted from Survivor twice in the space of a few months. That being said, it is hard to stay salty when you fill up on my Michaela Bradshortcake!

I know that the doll/TV show firmly pushes for the strawberry version of these delights, I have a strong aversion to the feel of them on my tongue and therefore avoid them at most costs. I mean, I’ll eat them but they are not my first through fifth choice.

Plus, how do you go wrong with apple, walnut and cinnamon? Exactly, you can’t – enjoy! 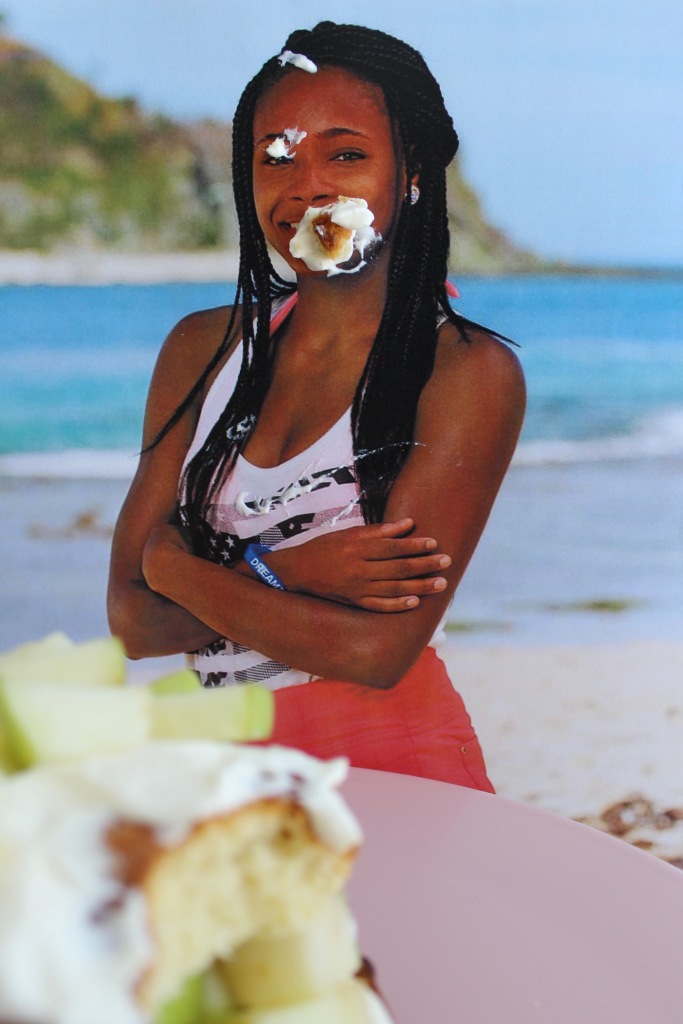 Method
Combine the apples, lemon juice, cinnamon and ¼ cup raw caster sugar to combine. Cover and allow to steep for an hour or so.

Combine the flour, remaining sugar, baking powder and a pinch of salt in a large bowl. Using your fingertips, rub the butter through the flour mixture until it resembles wet sand. Add 1 cup cream and walnuts, and stir with a fork until it just starts to come together.

Form the dough into large lime-sized balls and press to flatten on a lined baking tray, repeating the process until done.

Whisk the egg, brush each biscuit/scone and bake until golden brown, or about 20 minutes. Transfer to a wire rack and allow to cool for half an hour.

When ready to serve, whip the remaining cream in a bowl until soft peaks form. Half the biscuit and top with some apple and cream. Close the biscuit … and because I really like to load up on the toppings, add some more apple, cream and a pinch of cinnamon.