This year Christmas decided it didn’t want to play ball with our scheduling, so instead of leaving you hanging for a couple of days I decided to do a couple of throwback slash additional 12 Days of Survivor Christmas recipes to fill the gap. And no that isn’t a reference to them being zaddies.

But then again, it’s not not a reference to them being zaddies.

Despite kind of disappearing from the Survivor world after his dominant – even without the God idol – performance in Cook Islands, I can never imagine a yuletide without my dear friend Yul Kwon.

You see, I first met my dear friend Yul while he was attending Yale Law School. As is oft the case, I was running a scam – different to the Vice Chancellor one Hiz caught me out on – Yul figured it out and I returned to priz to find my ciggies and barter my way to greatness slash escaping priz.

Given he was such a babe and was so damn nice, I couldn’t help but stay in contact with him and guilt him into helping me become a better person. While you can question his success, I did love how hard he tried and so recruited him for Survivor to say thanks.

While Ozzy gets a lot of credit for his Cook Islands performance and the triumph of the Aitu 4, Yul is the glue that held everything together and successfully kept them in the game and carried them to success. I was in Los Angeles for his pre-Christmas victory and we were both desperate for something celebratory AND festive, which led to the birth of my famed Yule Log Kwon.

Inspired by Nigella Lawson’s take on the holiday classic, there is no better way to celebratory the holidays than with a thick, fat, nutty yule log. Which sounds a lot like I’m talking about scat … but I’m not, because this is delicious. 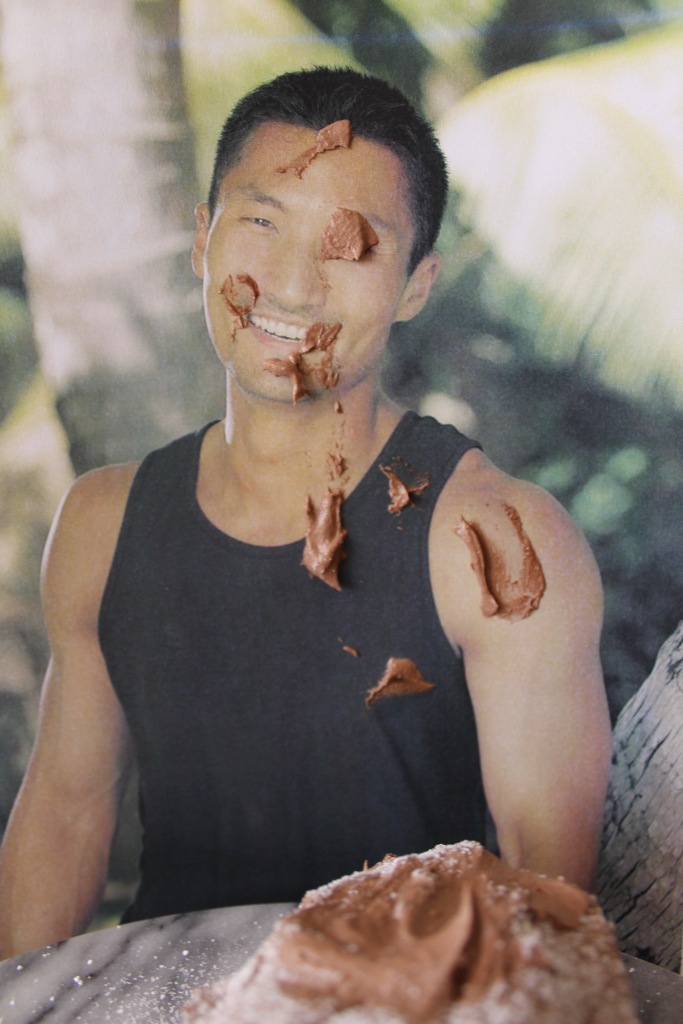 Uncouple the eggs into two separate bowls – the whites into a large, clean, dry bowl of a stand mixer and the yolks in a medium bowl. In should also be clean, FYI. Whisk the whites at medium speed, until they’re forming thick peaks. Sprinkle in about a third of the sugar and continue whisking until stiff peaks are holding.

Now focus on the yolk bowl, whisking in the cocoa, vanilla and remaining sugar until it forms a moussy consistency. Lighten the yolk mixture with a couple of dollops of egg whites before folding the rest through in thirds, followed by the hazelnuts, making sure to retain as much air as possible.

Transfer to a lined swiss roll pan and bake for about 20 minutes. Remove and allow to cool for about five minutes, before transferring to a cooling rack until completely cooled.

While things are chilling, melt the chocolate in the microwave and set aside before beating the icing sugar, butter and tablespoon of vanilla in a stand mixer on medium, or until pale and fluffy. Fold through the cooled chocolate until smooth.

To assemble, place the sheet of cake on lined, flat surface and trim the edges. Smear a thin layer of icing over the top of the cake – all the way to the edges – before rolling tightly along the longer side. Cut the ends on an angle to make it look more loggy and place the off-cuts on the side, setting with some additional icing. Generously ice the complete log, covering all the surfaces, before scratching in some wood marks using a skewer or fork. Make sure you don’t forget the rings at the end.

Dust with a light flurry of icing sugar before devouring.