Previously on Survivor, the war between Chris and Domenick raged on Naviti with Chris and Angela firmly on the outs. Meanwhile over at Malolo, the OG Navitians had control with Bradley and his little mouth leading the charge against Jenna, Michael – swoon – and Stephanie, with the latter swiftly kicked from the game as the fifth boot.

Probsty decided to open the show back up the next day by summoning the tribes for a reward challenge – PSYCH – the tribes were switching up, much to Bradley’s dismay and Wendell’s delight. Michael felt the impending swap was a saving grace for he and Jenna, while James and his tragically loose pants seemed concerned or happy. I’m not exactly sure TBH.

Jiffy handed out new buffs with Chris, Jenna, Sebastian, Wendell and Laurel discovering they would form the new green tribe Yanuya. Tragically Naviti had a numbers advantage on each tribe, with Bradley’s baby-lips and Chelsea joining Donathan, Domenick and Libby on new-new Naviti and Angela and James joining Des, Kellyn and Michael on new Malolo. Bradley was obviously feeling uneasy, not sure which alliances would hold out while Donathan – bless – was just happy to make new friends. Sebastian and the rest of the Yanuya were mostly concerned about having to start from scratch on a new beach.

We joined them back at the camp flag and despite not having anything else, they were feeling excited about their chances. Jenna was ready to win, Wendell had packed Sebastian’s perfect shell – not a euphemism – and reunited them and everything was coming up Milhouse. Sebastian was touched by the gesture and was excited to form a relationship away from the Chris and Domenick feud they were stuck behind. Chris then let everyone know how athletic and fantastic he is, over and over, though to be honest with nips like that, he can say whatever he wants. Even using the word beneficiary in the wrong way. Laurel, bless her, just tried her best not to call him out as long as they continued winning.

Over at new Malolo Michael, James and Kellyn were feeling confident, though Des was not as excited, unsure whether Angela would band with the girls to continue the Malolo slaughter. Angela and James then shared the continued feud of Domenick and Chris, and how she would have been a casualty of it had it not been for the heroics of Malolo, throwing Kellyn and Des into a panic. James and Michael reconnected, and felt they would be able to swing Angela. Maybe. Michael’s peach … DAY-YUM.

We then checked in with new Naviti where Bradley was cautiously optimistic about his position, sticking with Chelsea and reunited with Domenick. He and Chelsea then had a cup of coffee and for the first time we heard from the latter, who was moved by the coffee after the continual losses on Malolo. Domenick then shared how excited he was to finally be free of Chris, though it seems Libby has replaced him in his eyes as he cast her as public enemy number one. He spoke to Bradley about his concerns with Libby and her insincerity, leading to Bradley bringing out his cockiness again while talking about reconnecting with Domenick, playing everyone and his A+ game in general – legit quote, FYI – and I’m so excited for his impending downfall.

Jiffy Pop returned for the first immunity as new tribes where they would each have a caller direct blindfolded pairs of tribe members to find puzzle pieces and then solve said puzzle … still blindfolded. Aka the most brutal challenge of all time and I can’t wait to see people get smacked in the crotch like a teen movie! Des, Wendell and Domenick were calling for their tribes with Wendell getting Yanuya out to an early lead. Des then caught things up and took the lead as Donathan and Chelsea tried to secure pieces for Malolo instead of Naviti. Chris’ butt looked great, Michael may have learnt his jocks had holes as he wore boardies … before axing himself, Libby got smacked in the face, Michael and James then ran into a barrel and against all odds, Malolo got to the puzzle table first. Yanuya and Naviti made a beeline for the puzzle table – after Chelsea ran face-first into a pole – and things evened up pretty quickly. Well, until they discovered Wendell forgot a bag of puzzle pieces. The callers then guided a blindfolded pair of castaways to solve the puzzle, with Yanuya somehow taking victory followed by Naviti with Malolo heading back to tribal despite Kellyn doing her best, Des.

Despite feeling like he was creating a new curse after attending all but one tribal council this season, Michael got to work trying to find an in with the tribe. Given Des was feeling solely responsible for the loss and started to breakdown, maybe he had a chance. Kellyn checked in with Des to see whether she was still ok to get rid of James, which she obviously was, despite knowing it should be her. James and Michael got together in the water to find a way to save themselves, with James tasked with pulling Angela over to their side. James then shared that immigrating from Korea had given him the skills to form new relationships quickly, and assured Angela that he and Michael have her back and that Des was the best person to take out. Kellyn then checked in with Angela to see if she was still with the OG Navitians, however she wasn’t giving much away leaving Kellyn to feel sick as they headed off for tribal.

At tribal Jeff got to work rubbing salt in their wounds, calling them one of the worst tribes in Survivor history – ya’ hear, Jacob? Des shared how heartbreaking the loss was, as she felt this could have been her moment and instead she blew it. Probst reminded James that he had been in a similar situation, which he quickly danced around, as did Kellyn. Not Angela though, she thought that sometimes you strike out and you have to live with that. Des countered that getting rid of strength would actually be a better idea, given the merge is likely happening very soon. Obviously Michael disagreed given he has been to most of the tribal councils this season and felt it was still a short sighted plan.

Kellyn tried to make everything about OG tribal lines before James destroyed her argument, sharing that the tribes are random and don’t really matter. After Michael shared he leads with his heart – swoon – James, Des and Angela went head and Kellyn – bless – said her gut was the perfect mix of the two, the tribe got to voting and poor James was sent from the game as the sixth boot.

While he was super positive and calm when I caught up him at Loser Lodge, I could tell that deep down James was disappointed to go pre-jury. I assume because he fears it means no one will ever want to date him. Thankfully I allayed those fears while making a move, followed by a delicious James Limon Chicken Piccata. 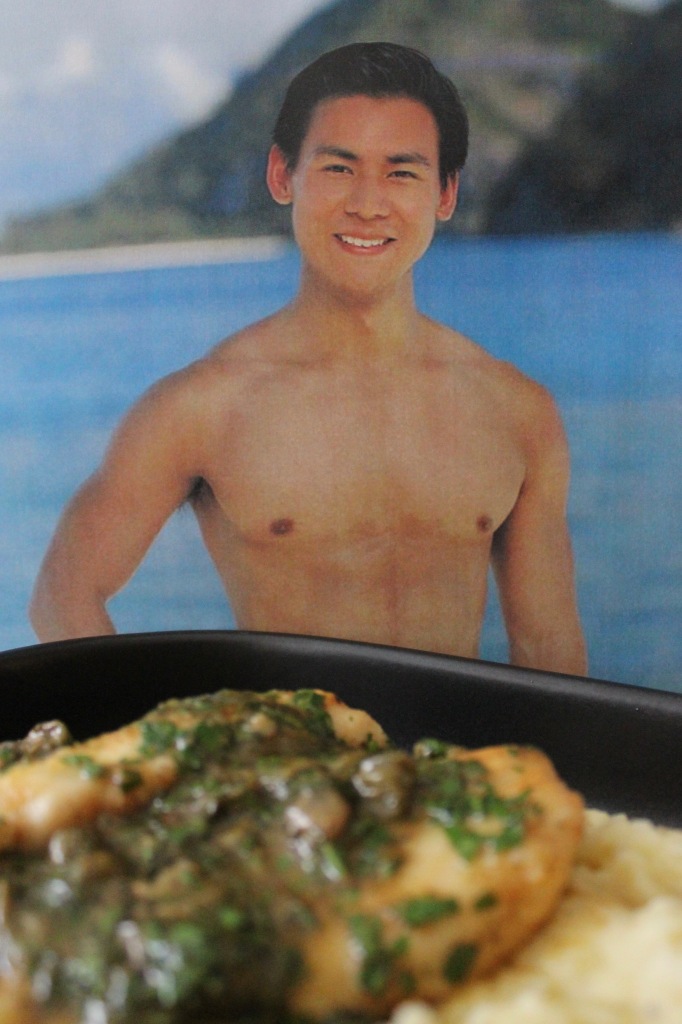 If ten year old Ben heard what I’m about to say, he would repeatedly slap me and probably make a glass of Milo for the sole purpose of throwing it in my face … but this dish sings because of the delightful capers. I mean, sure, they’re just horribly salty fruits, but when you add in the lemon and parsley, you’ve got perfection. 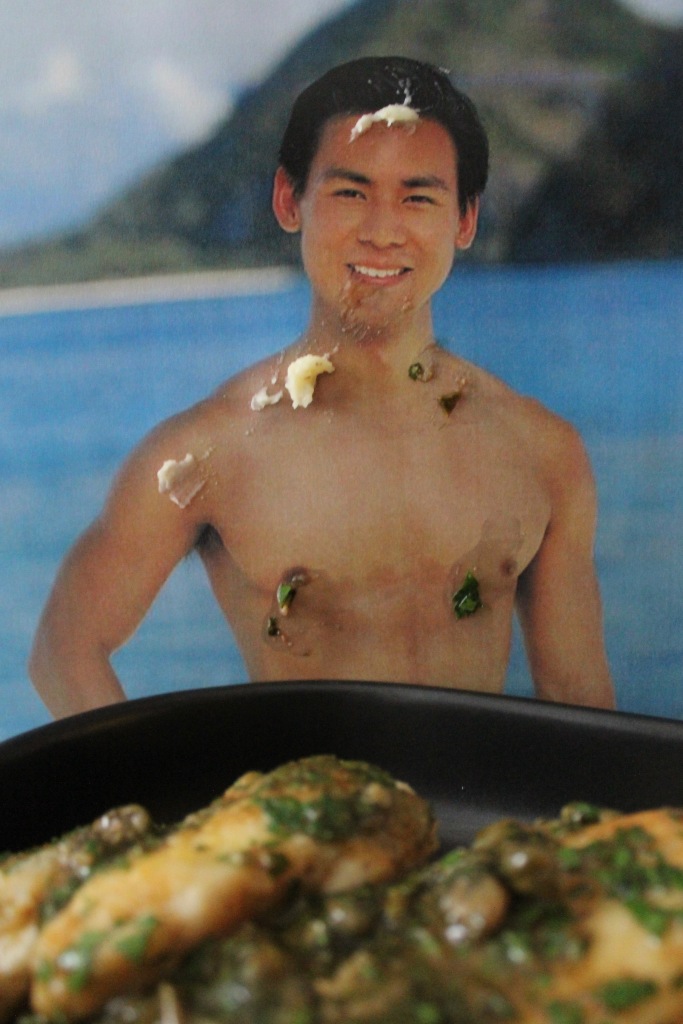 Method
Combine the flour with a good whack of salt and pepper, and dredge the chicken to coat.

Place a large skillet over high heat and melt the butter with a good lug of oil, and cook the chicken a couple of pieces at a time for a couple of minutes each side or until cooked through. Transfer to a plate and repeat until done.

Add the juice and zest, stock and capers to the pan and bring to the boil for five minutes, or until reduced and fragrant. Season, add the chicken and cook for a couple of minutes to release the flavours. Remove from the heat and add the parsley.

Serve immediately with some mash and doused in sauce.