Previously on Survivor four Davids and four Goliaths remained in the game, however Nick and Gabby realised that they needed to turn on fellow David Christian – confusing, no? – if they wanted to have a chance of winning. Sadly for them Davie warned him of the plan allowing him to play his idol and save himself, resulting is Gabby herself being blindsided from the game.

Things were relatively calm when Kalokalo returned to camp with everyone congratulating Christian on his well played idol. Despite voting for him at tribal, Nick went and congratulated him and tried to clear the air – again – and while he was sad the plan failed, he was glad to be able to hide a fake immunity idol in the hopes that he could get them to stop looking and snag himself the rehidden one. However while he, Angelina and Mike caught up with Christian by the raft, he decided to find the fake one. Mike took the intel back to Kara and Davie, and while Kara believed it, Davie didn’t believe that it would be hidden under the raft and figured out Nick was faking it (clearly he’s never heard of Ben)! The next morning Davie went searching for the idol the next morning, hoping to avoid Nick getting a second and powering to the final three. He then pulled in Christian and told him that Nick did have two idols and that they need to deal with him ASAP.

My boy Probst returned for this week’s reward challenge – for a helicopter ride to a luxury feast – where the tribe would be required to untangle themselves from a rope, gathering enough to make it through obstacle and throw bags to knock over all their blocks. The challenge was a complete blowout, with Davie knocking off most of his blocks before anyone even started throwing. Sadly for him he didn’t have enough rope, leaving him only two bags to throw with as Nick closed the gap. He and Nick continued to throw with one block remaining each before Davie just snatched victory. As Probst is want to do, he gave Davie the chance to invite one person along with him, paying Nick back for the family visit. He then got a second opportunity, leading to Angelina doing what she does best, begging to come along on reward for giving up her shot at immunity for the tribe’s rice. Sadly Davie gave zero fucks, taking Kara as she protected him during the swap. Much to Angelina’s chagrin.

When the losers returned to camp Angelina continued to seethe and shared her feelings with everyone. She then made a massive pot of rice, and TBH I am scared for Davie’s safety. Meanwhile Davie and his frenemy Nick and bestie Kara arrived at the reward where they quickly got to work smashing a tonne of food. After Nick went to have a food nap, Davie filled Kara in on Nick’s idols and the two vowed to blindside him at the next tribal. They returned to camp well fed, before Kara pulled Alison aside to bring her in on the Nick blindside, bringing joy to Alison as she finally feels safe. Alison then approached Mike to see if he would join them and while he agreed that Nick is a big threat, he isn’t sure he is the most pressing one at this moment.

Davie got up early the next morning to go hunting for the real rehidden idol, which he quickly found. Wait no, it was a note for an advantage which told him to go to the end of the beach where he was greeted by a Ghost Island set up which handed him an idol and gave him the opportunity to risk his vote to extend its power, like the great Chris Noble. Thankfully Davie isn’t an idiot, knowing it is too late in the game to risk his vote, sticking with its single-tribal power.

Probst returned for this week’s reward challenge where everyone would have to stand on a narrow perch and balance a bunch of balls on a disc, which you know is my favourite as I live for Probst ball puns. Everyone survived the single ball round, however Kara and Angelina quickly dropped when they added a second, Davie’s separated – which is uncomfortable – and he soon followed them, as did Christian, leaving Alison, Mike and Nick to battle it out for immunity. Nick dropped just before they moved to the three ball round where they both struggled almost instantly as Alison’s dropped out of nowhere handing Mike individual immunity and continuing the no repeat winners streak.

Back at camp Mike was feeling confident and ready to make a big move and take control of the game. Meanwhile Nick felt taking out Alison is the most pressing issue, while Kara is still pushing to get rid of Nick. And I just remembered that Christian is here since he has been non-existent this episode. Mike must have had the realisation too and decided that it is still critical to target Christian since he doesn’t have immunity nor an idol, trying to convince Alison and Nick to join his cause. Meanwhile Nick and Davie caught up, with Nick admitting his idol find was completely fake and as such, Davie was back being aligned with Nick and was ready to take out Alison. Mike noticed Nick talking to Christian and Davie, and decided it was time to make sure Nick was loyal to him. This led to Mike telling Nick about the plot against him leaving the votes split and hopefully, Mike can rally enough to send Christian home.

At tribal council Nick spoke about the game not slowing down, Angelina admitted to focusing on keeping the right people to take her to the end and Davie was confused about how to figure out who he trusts. Christian worried about who was willing to work with him, rather than whether they’ve voted against him before, while Alison and Davie brought up the fluid nature of the game and needed to adapt tribal to tribal. Mike agreed, hoping that he can play with everyone, Nick praised everyone for playing a good game and Alison tried to deflect being a threat. Which Christian agreed was a difficult label to shake, not wanting to break Laura Morrett’s vote record from Blood vs. Water. Mike admitted that immunity made him confident, making people nervous look around as they headed off to vote.

Before Probst had a chance to tally the votes, Davie played his idol for himself which led to Nick playing an idol. Psyche it was fake, he just wanted to read the room and while Angelina assured him he was safe, he opted to play his real idol as well. Two votes rolled in for Davie – which obvi did not count – while two also fell to Alison and Christian, with Mike’s plan coming together and a third vote ultimately taking Christian out of the game. And burning the remaining idols – YAS!

While he was obviously disappointed to be out of the game, Christian took his loss in stride and was happy to be voted out in a complex manner with vote splits and multiple idols. With that, we laughed, cried and ran some puzzle codes before sitting down to a piping hot bowl of Christian Hubisquie. 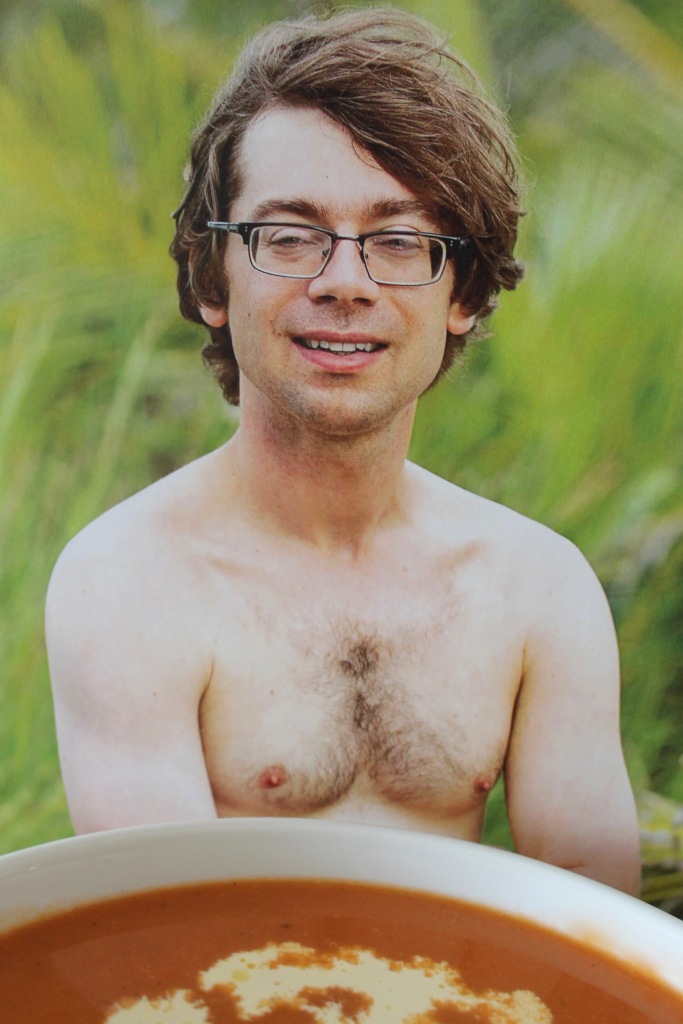 My favourite colour of Nutrimetics lipstick owned by my mother was Lobster Bisque, obviously, because to a four year old, bisque is a hilarious word. In any event I always thought that one day I would have lobster bisque, until I learnt that lobster was seafood. Which is the long way of telling you, lobster is out, tomato is in and all is right so in the world.

Well except for the fact Christian was booted. But enjoy!

Method
Melt the butter in a dutch oven over medium heat with the oil until well combined and a little foamy. Add the onion and sweat for five minutes, stirring occasionally allowing it to get charred to add to the flavour. Add the garlic, carrot and celery and cook for a further five of minutes.

Add the flour and cook, stirring, for a minute or two, or until it loses its flouriness. Add the stock, tomatoes and herbs and quickly stir to combine. Bring to the boil, reduce heat to low and simmer for half an hour, stirring occasionally.

Remove from the heat and blitz with a stick blender until smooth. Stir through the cream, season and return to heat until cooked through. Serve immediately with a dash of fresh cream.