There are a lot of things I love about Jeff Probst, outside of his insane beauty. His number one though, has to be his ability to make all statements smutty (that makes me lust after him even more) … even when half the cast are dying around him.

Much as been mentioned online (read: reddit) about what could Kaoh Rong this season and this is where Cambodia hit back and answered.

After a brief stint of Obama being sad, we went straight into the reward challenge where Probst focused on finding balls and sticking things into holes before the drama hit.

Debbie was first to fall thanks to the blistering heat but as biological cooling mechanic is one of her past jobs, she was fine. As she was recovering, Cydney and and my dear friend and rumoured (started by me) lover Caleb Reynolds went down in quick succession, with the later sadly being taken out by Survivor’s version of the Red Wedding.

It was fucking scary but who hasn’t almost died just to earn a cup of coffee, amirite Gilmore Girls?

I first met Caleb while he was on a tour of duty, where I was doing a sexy version of the USO Show. Despite what surfaced during his appearance on Big Brother, Caleb has been nothing but supportive of my aggressive homosexuality the entire time we’ve been friends.

Make no mistakes, Caleb was in a very bad way when he was taken out of the game but thankfully I was on hand to look after him and nurse him back to health, with some Tai-style stolen kisses and a big bowl of my Calebonara Reynolds.

Pasta is the ultimate comfort food, particularly with a delicate carbonara sauce and a good whack of parmesan cheese. But why have delicate and good, when you can add lemon and parsley to take it to the next level?

Exactly … and I mean, Caleb is back to full health, so yeah, case in point. It works. Enjoy! 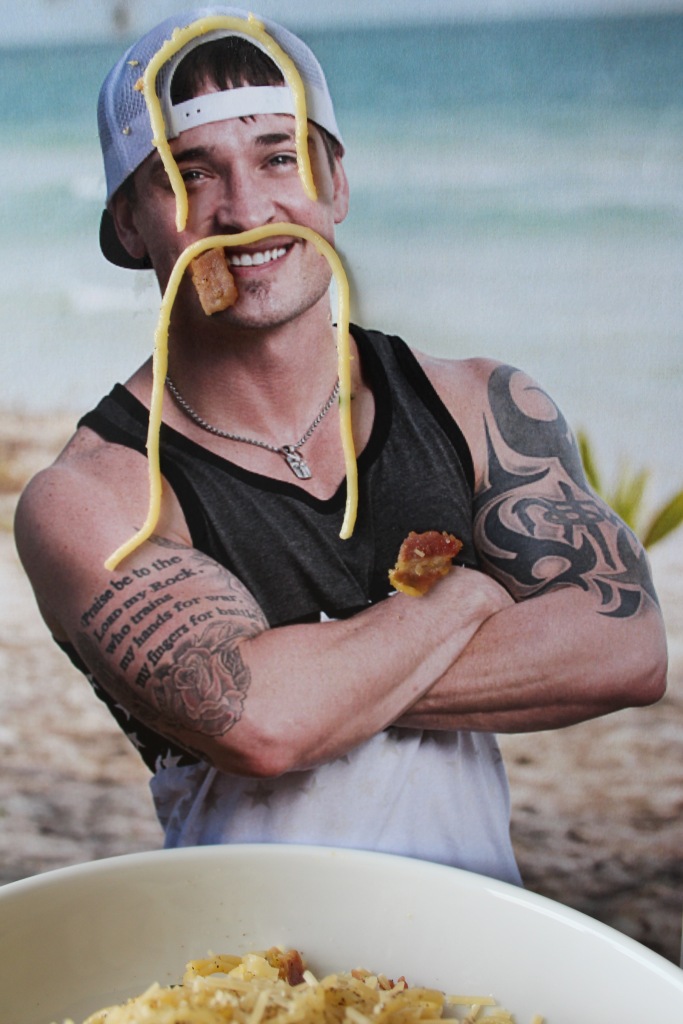 Method
Heat a lug of olive oil in large frying pan, add the pancetta and fry for a couple of minutes, until golden and crispy.

In the meantime, bring a large pot of salted water to the boil and cook the pasta to packet instructions. I know, I know, I should have made the pasta but it is a labour of love and I didn’t have time given I was nursing someone to health in Cambodia!

When the pasta is cooking, whisk together the egg yolks, cream, Parmesan, the lemon zest and parsley in a large bowl. When the pasta is ready, drain it and reserve a little of the cooking water. Place the pasta back in the pan (off the heat) and quickly stir through the egg mixture. Once it has delicately cooked, add the pancetta and toss everything together.

The goal is for the sauce to cook delicately, but if it ends up claggy, or say scrambled, add a few spoonfuls of the reserved cooking water to loosen it slightly.

Serve and sprinkle over / coat with a thick layer of parmesan and devour, happily … and healthily.