While my boy Eug plays a wonderful straight man, Cath is the Queen and Ems plays the voice of the audience to absolute perfection, my boy Dan is the true heart and soul of Schitt’s Creek. Though maybe I am biased as he based the character on his oldest friend – me!

As you know – though may struggle to comprehend because of the multiple timelines inplace – I have been friends with his dad and the wider Levy family for decades. Dan, Sarah – who I tragically couldn’t fit in due to another celebration happening next week (you won’t want to wait, promise) – and I grew up together like three peas in a pod. On the assumption that three peas can fit in one pod, obvi.

It was difficult to stay in contact with my constant disappearance to rehab, other countries or being on the lam, but Dan – bless his cotton socks – always tracked me down and we enjoyed a wonderful friendship as pen pals when we couldn’t be together.

Was there an undeniable sexual chemistry? Sure. Did we act on it? Shockingly no … at least on my part. Is that because we look like we could pass as brothers with our stubble, thick brows and militant feyness? Potentially, though that is another drawcard …

That being said, I am glad we’re yet to complicate our relationship by going down that route as he truly is one of my dearest friends. He is sweet, smart as a whip, funny as hell and created one of the best sitcoms on TV. And that has nothing to do with me wanting a part on the series. Not even when I got him cast opposite my girl Teens.

Anyway, Dan was thrilled to be able to make the trip down under – not to my down under – and toast to another fantastic season. And that was before he saw me whipping out my version of the Nova Scotian classic, Halifax Danair Levy.

I don’t know about you, but there is nothing that fills me with more joy that seeing a big piece of meat slide into a warm, fresh bun, covered heartily with a tonne of special sauce … and filled with tomato, onion and lettuce. Where did you think I was going with that? 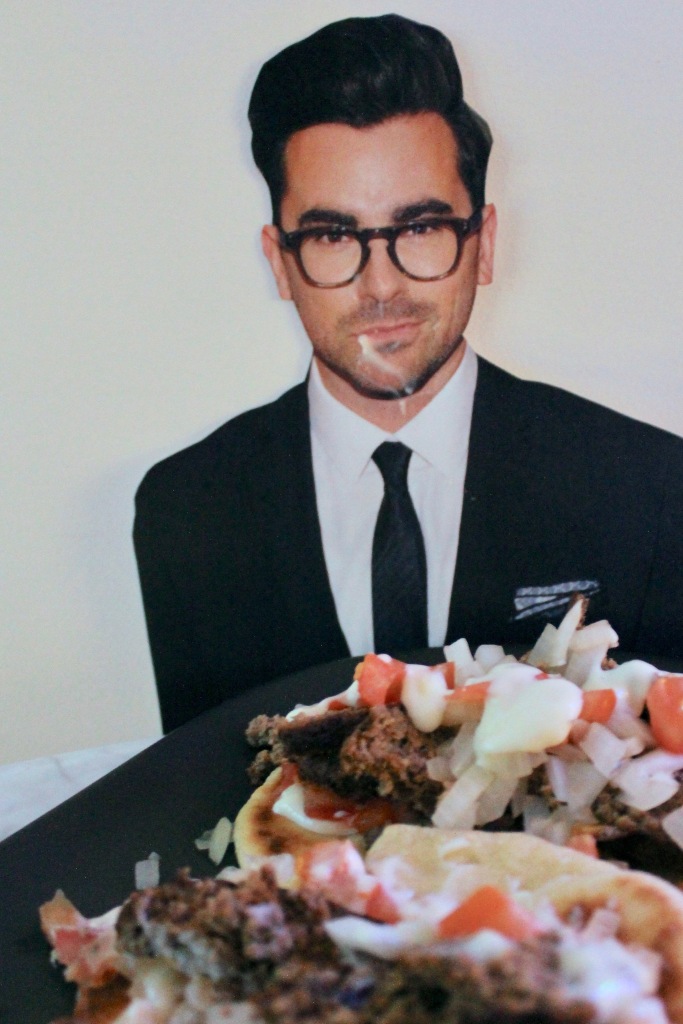 Place the mince, four cloves of garlic, herbs, spices and egg in a large bowl, and scrunch with your hands until well combined. Shape like a large meatloaf, place on a lined baking sheet and cook for 45 minutes, or until cooked through. Leave to stand for twenty minutes.

While your meat is doing its thang, combine the evaporated milk, remaining garlic and sugar in a small bowl. Gradual whisk in the vinegar until combined and just starting to thicken.

Slice the meat into thin – 3mm-ish – slices. Toast the pita on either side of a warmed skillet and fill with meat, donair sauce, onions and tomatoes … and then devour, messily.

One thought on “Halifax Danair Levy”