Just like that we’ve arrived at the end of this year’s Golden Globe Gold celebration, Goldy Bird and are ready to see whether my bets will pay literal dividends or whether I will need to assume a new identity and disappear again. But let’s not worry about that because after catching up with the divine Ryan, Katey, Rich, Diane and Gael, we’re wrapping things up with icon, queen and this year’s nominee slash host slash my dear friend, Sandra Oh.

I’ve known Sandy for close to two decades after meeting on the set of The Princess Diaries. I was part of Mandy’s entourage at the time but I quickly bonded with Sandra given she is extremely delightful, charming and I knew she was destined for greatness.

Despite the fact I introduced Sand and her ex-husband, I took her under my wing, introduced her to Alexander Payne and then encouraged her to audition for a little show called Grey’s Anatomy.

Needless to say, she is grateful for the way I shaped her career.

Sandra was super stressed as we caught up, busy perfecting the final Globes script with my boy Andy Samberg and getting set for their moment in the sun. Given two of my friends are co-hosting, it goes without saying I haven’t been this proud since the Tina and Amy years.

Given how busy she is, I didn’t want to waste to much of her time so we quickly sat down to run the final odds of the season. Obviously she downplayed her chances for Best Actress in Drama, predicting it is Julia’s to lose – I know Sandy is winning though – while we both agreed that Matthew Rhys will take Best Actor, Penelope Cruz will take Best Supporting Actress and Pose will snatch Best Drama.

With that, I now hand things over to the globes while Sand and I sit in her dressing room preparing for the final show and smashing some Sandra Dohnuts. 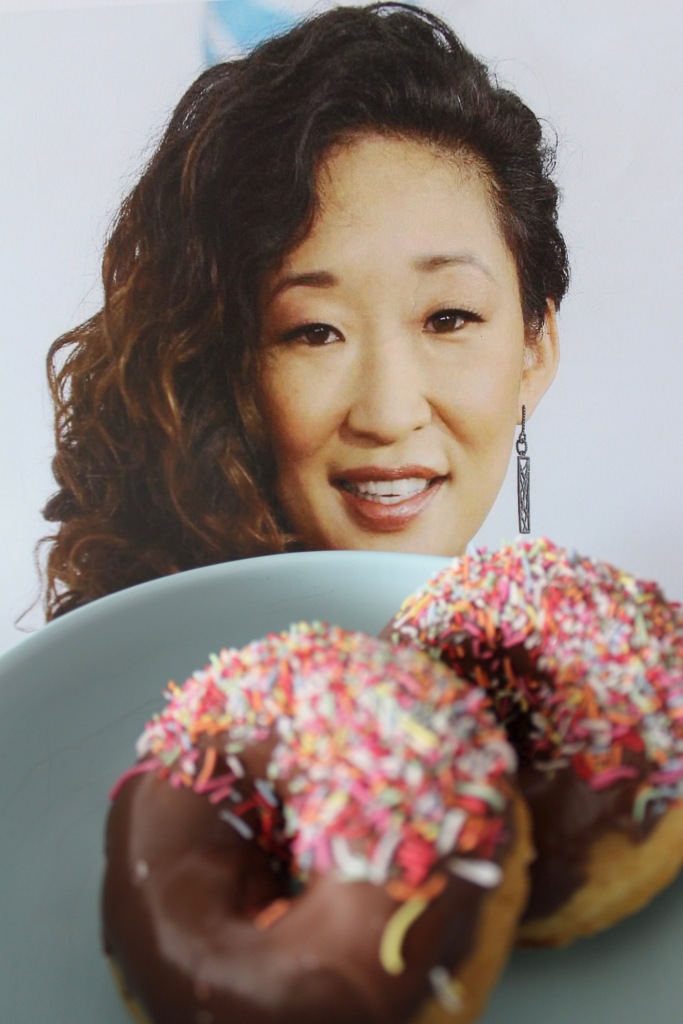 Pillowy dough covered in sticky, sweet ganache and a healthy layer of sprinkles? They may not be classy, but damn are they perfect.

In a large bowl of an electric mixer, cream the butter and sugar together until light, pale and fluffy. With the mixer still on, add the eggs, one at a time allowing to mix after each addition, and the milk and vanilla, mixing until combined. Still mixing, add in the baking powder and salt until just combined – it may look a bit curdled, but relax.

Remove from the mixture and fold in the flour until just combined, making sure not to overmix.

Transfer batter into a piping bag and pipe into a doughnut pan. If you don’t have a pan you can try and pipe them into circles – they may not look perfect, but they’ll taste it!  Bake for 8-10 minutes, or until golden and fluffy.

Remove the doughnuts from the oven and transfer to a wire rack to cool. Repeat the process until the batter is done.

While they’re all chilling, sift together the sugar and cocoa powder in a medium bowl and slowly stir in the milk and vanilla until a smooth, pourable glaze forms. Pour over the chilled donuts and sprinkle, with the sprinkles.

Leave to set, then devour.